Where can I find studies done on the strength dimorphism between male chimps and female chimps?

I searched for "chimpanzee strength" on PubMed and followed links from 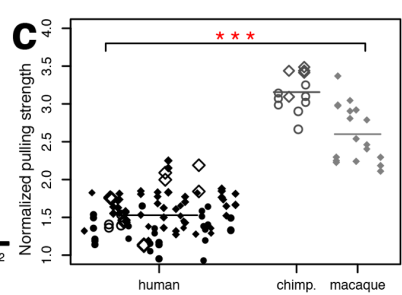 which shows pulling strength normalized by individual body weight, with circles for females and diamonds for males. In fact, the Excel spreadsheet given in supplementary materials shows there were two males and three females, tested in three sessions; in each session weight and pull strength were listed. The ratios of max pull to weight for males were 3.44 and 3.49, for females were 2.9, 3.14, and 3.25 (one of the males was quite small ...)

O'Neill et al. give a few other references, you could follow those as well and see what you come up with. (I found that "chimpanzee strength" gave better results as a search term than terms including "sexual dimorphism", which tended to be swamped by more general discussions of the evolution of dimorphism in apes.)

extreme caution is needed in interpreting these results for Chimp sexual dimorphism, quite apart from the very low number of individuals, there is a significant problem with these measurements - as the paper itself notes "The inability to control nonhuman primates' motivation hinders the exact quantification of the muscular strength difference between humans and nonhuman primates, even in a highly controlled experimental setup." This problem equally applies to male/female differences.

In other words, male chimpanzees might pull harder at least in part because they are more motivated than females in this particular setting, rather than because of intrinsic differences in strength. (That may or may not matter for what you are trying to do with this information.)

Not the answer you're looking for? Browse other questions tagged sexual-dimorphism or ask your own question.

4
Main mechanism of the evolution of sexual dimorphism
3
Sex biased gene expression in the X chromosome
2
How to differentiate male and female mosquitoes at pupal stage?
1
For animals with separate hermaphrodite and non-hermaphrodite populations which is more common, female + herm or male + herm?