How can cats' claw grow sharper without replacing the claw?

I cut my cat's claws once a month. The claws always have pointed and sharp tip even though I had cut them last month. I assumed cats cannot change the shape of the claw by growing new keratin at the tip. Also it does not looks like the cat grow a new claw and abandon the old one every once a month or so. How is it possible that the claw grow sharper?

The horn has a specific structure which is different from the round edge that we see on our fingers. It splinters and cracks into flakes, so it is more similar to a flint than a chalk. The outside of the cone dries out and flakes and is scratched off by the cat, while the inside of the cone is the newer horn that grows towards the apex as a new blade edge. 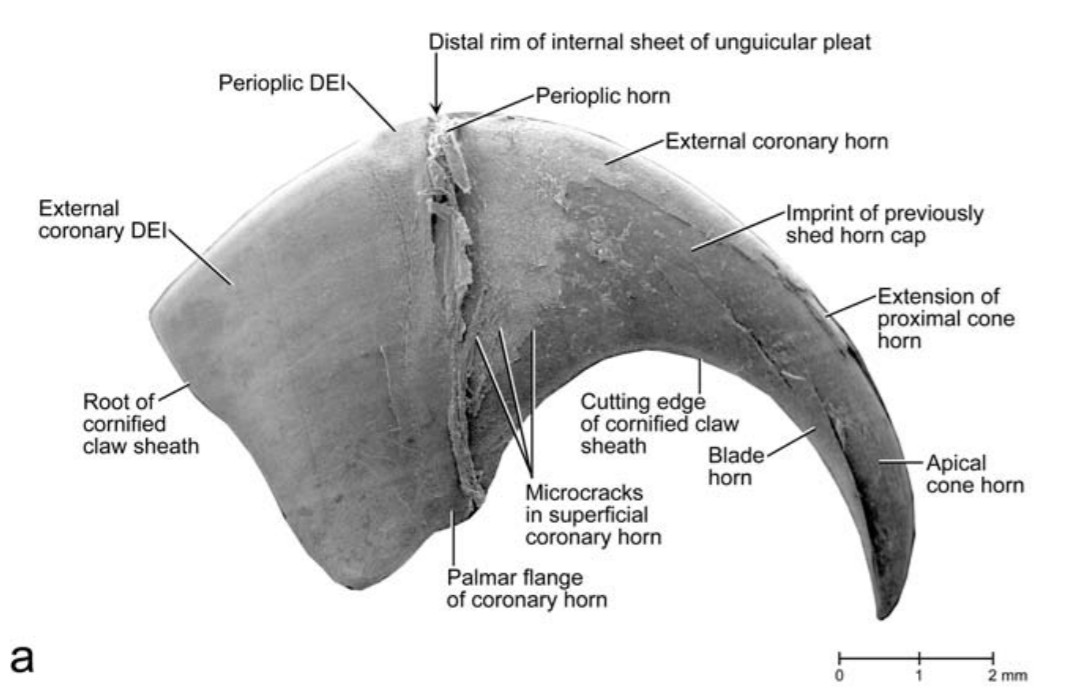 The image is from this research. If you search "sharp" you will find astonishing vetinary descriptions quoted. Also see page 641 for the conclusion of the research. He sais that it seems to have evolved in the aim of keeping the feline claws sharp.

If someone has the technical ability to rewrite the researcher's descriptions into everyday words, you would be a first.

The horn-generating living blade epidermis that is located most centrally on the slanted face of the curved ledge is continuous with the parietal epidermis (Fig. 9b), so that the blade epidermal cells generated here lie next to the parietal epidermal cells. Therefore, the cornifying parietal epidermal cells are deflected and entrained apically as the blade horn is pushed apically by the proliferating living blade epidermis. The direction in which the blade horn is pushed forward can also be inferred from the arrangement of the ridges visible on the dermo–epidermal interface of the parietal horn (Fig. 7). The living blade epidermis that is located at the outer edge of the face of the curved ledge is continuous with the living epidermis of the proximal cone horn (Fig. 9b). These lateralmost blade epidermal cells, therefore, form a layer that lies directly underneath the deepest layer of proximal cone horn, so that the boundary between the blade horn and proximal cone horn is indistinct. Hence, the layers of horn that are generated in the dorso-proximal bend of the curved ledge underneath the combined horn layer of the external coronary and proximal cone horn cover the sides of the apical cone horn and are designated as part of the blade horn. As the superficial coronary horn on the dorsal side of the cornified claw sheath is worn off through normal use, the superficial layers of the blade horn are exposed and are shown to hug the sides of the apical cone horn (Fig. 13a). Remnants of these blade horn layers are discernible near the very tip of the cornified claw sheath, which consists mostly of apical cone horn, because the rest of the coronary horn, including most of the blade horn, has been worn off (Fig. 13b,c). The remaining soft-cornified horn segments of the cornified claw sheath are found in places where the hard-cornified horn divisions need to be supported and cushioned. The soft-cornified terminal horn is a segment of the third major horn division (i.e. the Hyponychium; see Table 2). It is generated by the living terminal epidermis, which is continuous caudally with the parietal living epidermis and is supported by the dermis that covers the medial, lateral and palmar sides of the tip of the bony unguicular process (Figs 3a, 4a,c, 7, 9b, 11a, 12a–j). It supports the apical cone and crest horn on its dorso-distal side (Figs 3a, 4a,c, 7, 9b, 13b) and the blade horn on its lateral and medial sides (Figs 4b, 8, 9b–d, 13a,b). By filling the space created by these converging segments of hard-cornified internal coronary horn, it is shaped into an elongated, pointed cone and extends proximally between the blade and sole horn (Figs 12c,d,f,h,j, 13a,b). Because the terminal horn is soft-cornified, it can adjust its shape to the changing conformation of the space it fills in the course of the deformations of the cornified claw sheath during its normal use. The friable soft-cornified sole horn is generated by the living sole epidermis, which is supported by the dermis that covers the proximo-palmar side of the bony unguicular process (Figs 3a, 4, 7, 8, 9b–e, 12c,d, 13a,b). Along its medial and lateral sides, it is embraced by the terminal and parietal horn (Figs 1b, 4b, 8, 9c,d, 13a,b). The sole horn, therefore, fills the space between the paired cutting edges of the cornified claw sheath. It is worn off through natural wear and tear, as well as through repeated compression and release, as the cornified claw sheaths are deformed when they are subjected to tensile forces during climbing and prey capture.

Not the answer you're looking for? Browse other questions tagged zoology cat or ask your own question.

6
Can female Drosophila melanogaster lay eggs without males?
0
How do cats shed their fur?
0
What is the reason for cats not liking water?
1
How lion can carry the cub without harming it?
8
What is the mechanism behind cats' geolocating homing behavior?
0
How far can parrots fly without needing to land?
1
How do big cats perceive objects, specifically vehicles?