During DNA foot-printing, what is the purpose of radioactively labeling only one end of the DNA fragment?

I read that during DNA foot-printing analysis, DNA is radioactively labeled on one end before being cleaved by DNase 1. I understand that it is labeled so in order to locate the fragment on a gel, but I don't understand why it is only labeled on one end? If the DNase cleaves it in two, wouldn't the other end be un-labeled and untraceable? Therefore kind of defeating the purpose of labeling it at all?

Although there is a Wikipedia page with a general account of DNA footprinting, this perhaps does not put sufficient emphasis on the general strategy, making reference to the Maxam & Gilbert DNA sequencing method, with which contemporary students are not likely to be familiar. Elsewhere on SE Biology I have summarized the strategy of different DNA sequencing methods, so I shall use that as a starting point for this answer.

The Strategy of DNA Footprinting

In DNA sequencing there are two conceptual pieces of information one is trying to discover: the identity of a base, and the position at which it lies. A third point of importance is the practical technique one uses to realize a strategy. The method of DNA sequencing developed by Maxam & Gilbert used specific chemicals to fragment pieces of DNA:

In DNA-footprinting we are not concerned with identifying the bases: the DNA has probably already been sequenced or we can do that separately. We are in interested in positional information, and we shall see that this also involves fragments — generated by the non-specific DNase — and their visualization, as in the method of Maxam & Gilbert.

This is explained in the figure below, my own modification of Coutney2008.jpg, in the Wikipedia article mentioned. 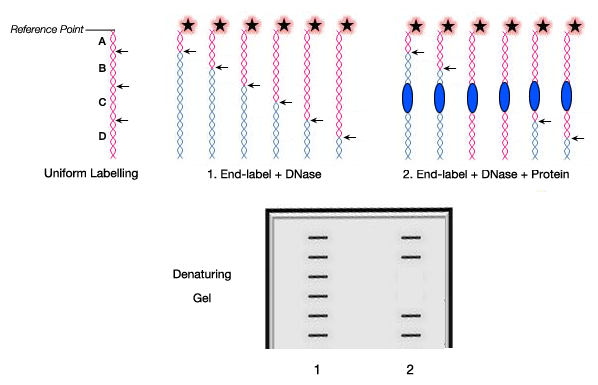 The frame on the extreme left addresses the question of labelling and visualization by showing the fragmentation of uniformed-labelled DNA by DNase. In this example the DNase cleaves at three points (arrows), generating four fragments of different sizes, A, B, C and D. If these fragments are separated and visualized by their radioactivity (by autoradiography) there is no way of knowing their position in relation to the reference point. So whatever our strategy is in relation to protein-binding (explained below) the positional information is not revealed. We cannot tell that fragment A contains the reference point.

Now let us turn to Frame 1, which is in effect the Maxam & Gilbert strategy without the base-identification. The DNA is labelled at one end and treated with DNase at a concentration that will generate a range of fragment sizes. The ones we are interested in are those that include the reference point, which is the end we have labelled. These fragments have been coloured pink. Other fragments (light blue) that do not include the reference point will be generated — including some of the same size as those of interest — but these will not interfere with our analysis as they are not labelled and will not be visualized after the fragments have been separated according to size on denaturing gels and subjected to autoradiography (see gel lane 1). (The unlabelled ‘light blue’ portions may have been fragmented further, but this has not been shown for clarity.)

The footprinting strategy is shown in Frame 2. The experiment of Frame 1 is repeated with the DNA-binding protein (bright blue oval) added. Now the region of DNA to which the protein binds will be protected from DNase. Thus, fragments terminating within this region will be missing and be absent from lane 2 of the gel. Hence the position at which the protein binds is specified as the distance of the missing fragments from the labelled reference point. (There are likely to be fragments of the same size as the missing ones in the mixture, but, to repeat, because of the end-labelling they will not be visualized.)

Not the answer you're looking for? Browse other questions tagged molecular-biology dna molecular-genetics gel-electrophoresis or ask your own question.

3
Why re-label the strand ends in 3' DNA labelling?
3
Separating DNA Fragments by Gel Electrophoresis. Are all the strands for one size the same?
1
What is the mechanism of labeling a DNA molecule with deuterated water?
6
Why is the DNA codon table “equal” to the RNA codon table
4
DNA sequencing problem
2
Reading and Understanding profile bands in DNA Fingerprinting
3
To what extent is the genetic code more than just a code?
3
What is the purpose of the “No DNA control”?