What determines the influx of calcium ions in the voltage-gated ion channels?

Calcium channels play a crucial role in neuronal signaling by helping the synaptic vesicles to fuse through the synaptic active zone and release their neurotransmitters. My question is, at a given moment, what determines the influx of calcium ions in these channels? Where are the ions coming from and what is their source? Is the influx determined by the source by changing the ion flow, or the ion flow is constant and the influx of ions into the synapse is only regulated by opening/closing of the channels?

Calcium ions, once inside the neuron, will be used to release neurotransmitters into synaptic cleft.

What determines the influx of calcium ions in these channels?

Whenever dealing with flux, it’s helpful to start with what determines the flux rate of anything:

The calcium ion (Ca2+) gradient is established by an extracellular concentration > intracellular concentration (at rest) across the neuron’s cellular membrane at the terminal end (pre-synaptic neuron). Le Chatelier’s Principle (equilibrium) indicates that potential energy will build from the unresolved Ca2+ gradient, which will drive flux from high to low when given the chance.

The Ca2+ resistance is established (mainly) by voltage-gated Ca2+ (VG-Ca2+) channels. These are also on the terminal end of the neuron (pre-synaptic), and resistance is determined specifically on if channels are open or closed (closed at rest), AND the number of VG-Ca2+ channels present on the membrane.

To create an influx, gradient has to become > than resistance. Once an action potential travels down the axon and depolarization occurs at our local site, the increase in membrane potential (voltage) opens the VG-Ca2+ channels, thus decreasing resistance. Influx of Ca2+ into the axon terminal occurs.

Where are the ions coming from and what is their source?

Neurons are the flashy & exciting (no pun intended) cells in the nervous system, but to answer this question we must acknowledge that glial cells exist.

Neuroglia, glia, or glial cells are cells that DO NOT produce electrical impulses, but are cells within the nervous system.

One type of glial cells are called astrocytes, or astroglia, and a couple of their many functions includes distributing nutrients to nervous tissue, and maintenance of (neuronal) extracellular ion concentrations, including Ca2+. Astrocytes also have access to blood vessels, giving them access to nutrients (supposedly like calcium ions).

Research on the specifics is very up-and-coming, so it is difficult to find much on it. We know calcium is coming from blood (crossing the blood-brain barrier), glial networks (including astrocytes) distribute nutrients, and astrocytes specifically are tied to extracellular neuronal ion homeostasis.

If you are interested in researching this further, the connection (and network) of a neuron to its blood supply is called neurovascular coupling. 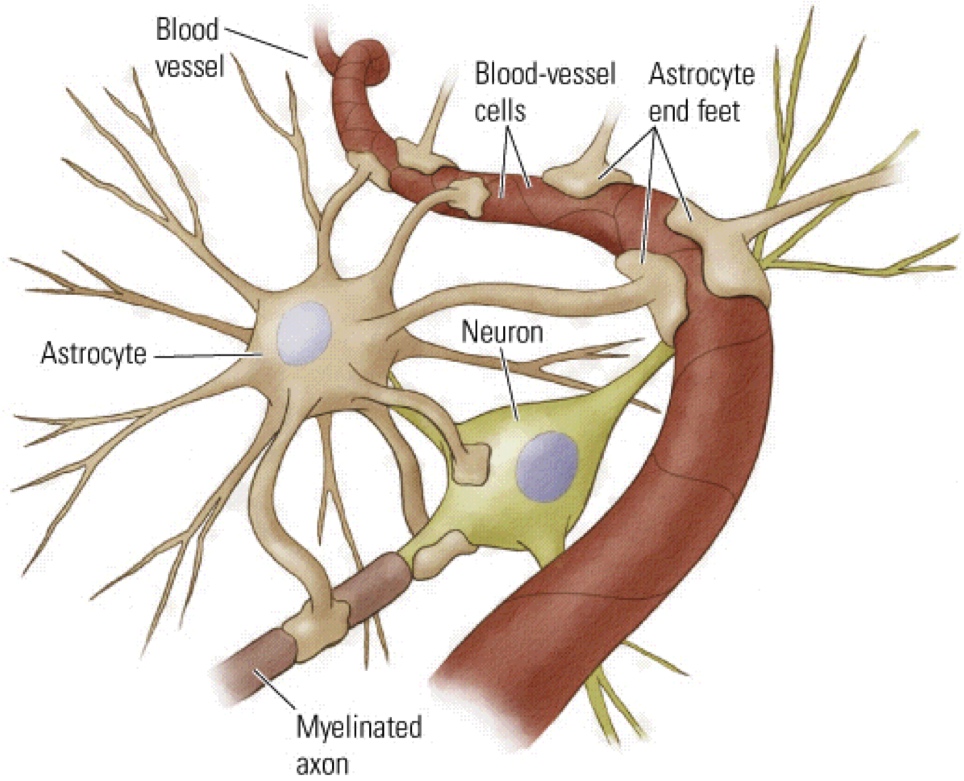 Is the influx determined by the source by changing the ion flow, or the ion flow is constant and the influx of ions into the synapse is only regulated by opening/closing of the channels?

Ion flow from source is fairly constant (in a healthy individual), the biggest regulator of ion flux into the pre-synaptic neuron will be the actual VG-Ca2+ channels.

Ca2+ outside of the (pre-synaptic) neuron’s axon terminal will influx when depolarization reaches the axon terminal, as that decreases Ca2+ resistance across the membrane:

Ca2+, once inside axon terminal, interacts with SNAP and SNARE proteins to shuttle vesicles containing neurotransmitters to the synaptic cleft (Ca2+ - regulated exocytosis).

So, let's use a neuron to neuron connection as an example.

Calcium is released into the neuron when voltage gated ion channels, specific to calcium, open. These channels can only open when there is a significant depolarisation in the axon terminal of the neuron.

Where do the calcium ions come from? The majority of them are outside of the cell by the plasma membrane and adjacent to the synaptic vesicles.

I'm not too sure what you mean when you ask what the calcium ion's "source" is. It is common for calcium ions to sit outside the cell, not just in neurons, to help maintain potential difference for example.

And yes, the influx of calcium in a neuron is determined by the opening of voltage gated calcium channels.

Not the answer you're looking for? Browse other questions tagged neuroscience brain neurotransmitter synapses or ask your own question.