What nutritious insects exist to farm that require the least attention?

What nutritious insects exist to farm that require the least attention? I'm looking to automate simply, in a self regulating way.

Edit: To add detail, I imagine the insects would live densely in a large tank and be isolated from the outside. They would be able to breed and would co-exist with a plant that is also able to propagate, that could if needs be even be an air plant, that is eaten by the insects, dead insects either return to nourish the plant, or leave through a funnel, water also evaporates and falls as rain inside the tank.

The idea is to produce food without human effort. This could be in the form of a very cheap to use coin operated vending machine. The insects could be compressed and dry fried into a block to be dispensed, maybe like a bar, the machine could be solar powered.

The leaf cutter ant Atta laevigata is a popular delicacy in Colombia where it is known as hormiga culona (big-ass ant). The ants are usually salted and fried and play a similar culinary role (I am told) as pop corn (image source): 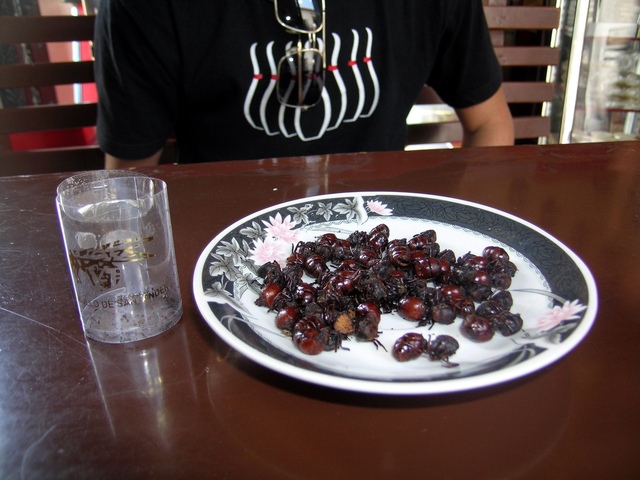 I can't testify as to how hard it is to cultivate them, but one difficulty will be chosing the edible ones. Apparently, only the queens are edible.

The silkworm Bombyx mori is farmed for silk, but the pupae are also eaten across the Far East. Since these insects (larvae) have been domesticated for centuries there are well-established procedures for growing them.

Not the answer you're looking for? Browse other questions tagged biochemistry proteins entomology food nutrition or ask your own question.

30
What are the trajectories of flying insects?
5
What are minerals (other than zinc) that the human body cannot store
2
What are the sources of energy that alcohol provides?
1
What term describes insects that must eat protein to reproduce?
3
What chemicals/substances exist in green capsicum (peppers) that do not exist in red capsicum?
3
What are these two insects (or at least one of them)?
7
What are these shrimp-like insects in my cat's water bowl that appear overnight