How do bull semen companies get the semen out of the bulls?

Prompted by this article, which discusses the low number of bulls who sire US dairy cows.

How do semen companies extract semen from bulls?

Colorado State University has two helpful pages that explain the main procedures (h/t Tom). Semen Collection goes through the 3 ways that are used to collect semen from animals.

Semen is most commonly collected from bulls in bull studs using an artificial vagina, as described below. Electroejaculation is an alternative method used with bulls that cannot mount or are too fractious for easy handling (e.g. range bulls). Finally, semen can be collected by message of the seminal vesicles and ampullae per rectum.

The procedure revolves around using a steer as a teaser to arouse and mount the bull, and then having an operator divert the penis the AV: 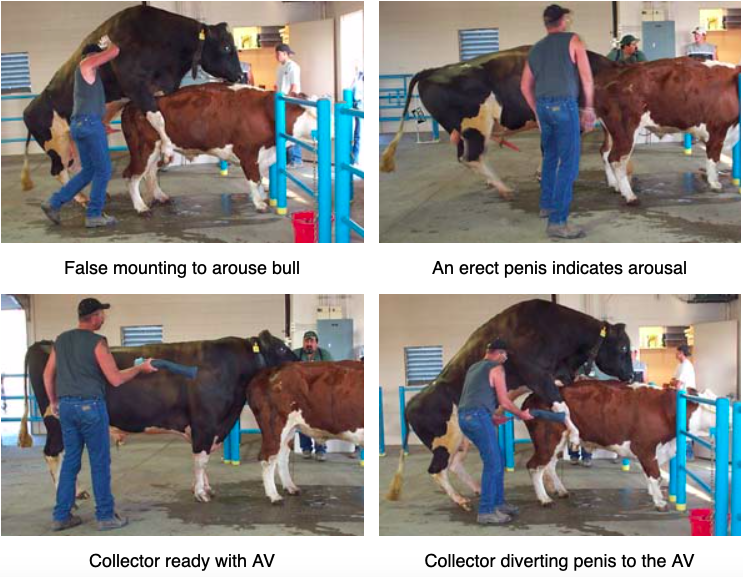 As one of the pages helpfully explains:

Prerequisites to use of an AV are that the male be conscious, not significantly frightened of people, and more interested in ejaculating than in killing humans.

The main alternative for less docile bulls appears to be electroejaculation, which involves applying a series of short, low-voltage pulses of current to the pelvic nerves which are involved in the ejaculatory response. You then collect semen using a director cone much like the one in the image further up.

Not the answer you're looking for? Browse other questions tagged methods animal-husbandry or ask your own question.

4
How can I reduce the background gradient in phase contrast microscopy?
5
How are the physiological properties of mitochondria measured?
4
How to know the gestation time of pregnant mice?
0
How can I fit the A595 of my unknown samples to the data?
2
How do you determine the length of an annelid?
1
How do animals avoid the problem of inbreeding?