What do the the different arrowheads mean in a cell signalling diagram?

What do the different arrowheads mean in the figure below? Are there arrows upstream or downstream signalling?

As I said in my comment and to add to @AlwaysConfused's answer, the arrowhead is a promotion, and flathead is an inhibition.

Typically, any other notation such as dotted lines would be explained in the figure legend of the illustration.

The below definitions are generally accepted and widely used. But don't take these definitions for granted; there are no strict usage policies for these diagrams. Different groups may use different nomenclature and symbols. 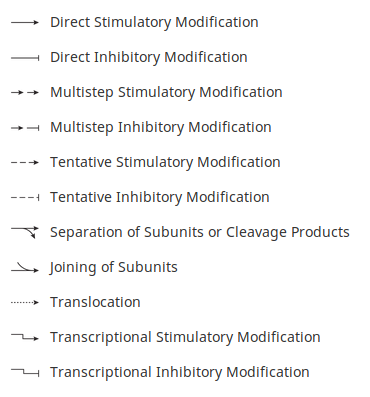 These definitions were taken from a legend in cellsignal.com.

The arrowheads are not necessarily linked to up and downstream signalling. Generally, the direction of the arrow indicates upstream/downstream. However, at a glance, this has even less standardisation than the arrowheads. Sometimes, like in the example in the question, upstream is generally at the top, and downstream is at the bottom. Other times it is from left to right, or right to left. There are many examples of cyclical events which the only way to tell is by following each arrow "path" for a particular signal.

means A suppressing B. the factor at the arrowhead is being supressed. The factor at arrowtail is an suppresor for the other factor.

The "normal" (green here) arrowheads stand for a positive effect of the upstream factor or protein on the process or protein it points to. For instance, it means amino acids activate TORC1. Instead, arrows that end with a line (red here) stand for inhibition. For instance, rapamycin inhibits TORC1.

These arrows have nothing to do with upstream and downstream signalling.

Read further about this https://www.khanacademy.org/science/biology/cell-signaling/mechanisms-of-cell-signaling/a/intracellular-signal-transduction

Not the answer you're looking for? Browse other questions tagged biochemistry nomenclature cell-signaling or ask your own question.

5
Explanation of the terms “downstream signaling” and “upstream signaling”
5
Effect of testosterone hormone on cell signalling and behaviour?
3
Does the cellular response to every receptor work the same way?
3
How does the cell regulate different metabolic pathways?
2
Meaning of arrows in 3D representation of proteins
1
Exact definition of 'convergent' and 'divergence' in cell signalling?
1
Difference between AjuA and ajuA in biosynthesis
1
Why is inhibition of inhibition (reciprocal inhibition) such a common motif in cell signalling?
1
What does it mean to “nucleate multi-protein complexes”?