Is it the case that all changes in phenotype during life are not inheritable?

This came up in a talk with a friend. I wanted to clear this doubt. I've read about it before and did again after her remark (my thoughts didn't change: her concept is Lamarck's, not Darwin's), but wanted to clarify.

Regarding Evolution, nothing, absolutely nothing, that a person does to herself in life can be genetically inherited. It does not matter how much this person drinks, the changes they do to their body, how dark their skin gets over life etc. Such changes can not be transmitted to their offspring in any way, correct?

*Summary:*Is the assertion "You can not change in life what will be genetically inherited in any possible way" true?

The assertion "You cannot change in life what will be genetically inherited in any possible way" is true, as you cannot (healthily) change the DNA in your germ cells.

However, the assertion "You cannot change in life what will be inherited in any possible way" is wrong, because of epigenetics. Parts of your DNA are marked (in different ways), and this can be inherited and have an effect. E.g. the only causal difference between these two mice is the diet of their mothers: 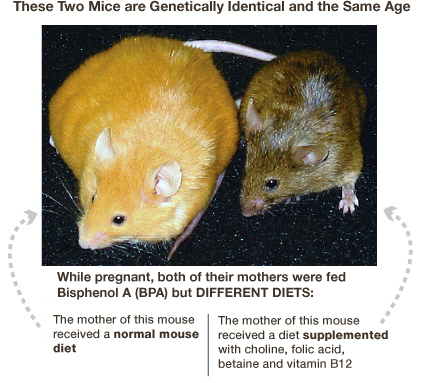 Image source and a further explanation: Nutrition and the epigenome.

In general, Darwin's theory has been supported over and over again by experiments - our modern understanding of evolution is fundamentally what Darwin suggested. However, apart from appreciating many more details than Darwin ever could have, we also now know that Lamarck may not have been so crazy as he was later portrayed.

Inheritance in the Darwinian sense involves the digital information of DNA, i.e the sequence of bases. But we also know that DNA can be altered structurally - i.e. in the way it folds, or whether bases are methylated - and that these structural alterations can affect the expression of genes. In some cases, these epigenetic modifications can be trans-generational; they can be passed on to offspring.

Here are the mechanisms that I know of (perhaps others can expand on this):

Finally, there is also a phenomenon called structural inheritance, whereby a structural feature of an organism is inherited in a non-genetic way. There is less written about this, so the mechanism is not entirely clear as far as I know, but an example is that the 'handedness' of the spiral pattern on the shell of a protozoan Tetrahymena is inherited without any genetic change (Nelsen et al., 1989).

Is the assertion "You can not change in life what will be genetically inherited in any possible way" true? No. Does not seems the case, as other people already replied.

Here, I just want to point to two recent research articles showing evidence against your assertion.

The first, published in Cell in 2010, is from Dr Oliver Rando, and suggests that you are what your father ate, too. The second, published in Nature in 2011, is from Dr Anne Brunet, and argues that worms can inherit a 'memory of longevity' from long-lived parents.

Infections by a retro-virus (such as HIV) can, at least in principle, be inherited.
These viruses integrate their genome into the host's DNA, and these changes pass to next generations as the cells split. So if a germ cell is infected, all the cells in the child would be.

The question is whether there's a retro-virus that infects germ cells. I don't think HIV does (it can certainly pass from mother to child, but as a "normal" infection, not through the DNA).

Not the answer you're looking for? Browse other questions tagged evolution epigenetics or ask your own question.

0
Does the modern synthesis theory of evolution deny that acquired characteristics can be inherited?
2
If I workout, will this inherited trait (of being stronger) not be passed down to my offspring (Lamarck's theory on evolution)?

32
Why are not all species hermaphrodites?
2
Are humans still competing in the same way now that the first life forms did?
1
What are the evidence that all life today descended from a common ancestor (LUCA), and which organisms (if any) challenge the concept?
3
Why does all life use the same macromolecules in their genetic code?
1
Why even if all requirements for natural selection are met, it may not happen?
2
New earliest life found, what are the implications?
1
Are pheromones capable of activating changes to the Phenotype of a complex organism?
2
Evolution as a directed graph exploration?
12
Why are there not two trees of life?