What causes the shape of the dense structure in this "giant squid egg" sac?

The YouTube video Swimming Next To Giant Squid Egg shows a giant egg of a squid and/or an egg of a giant squid. Text in the video's description includes the text quoted below, which indicates that the "egg sac containing hundreds of thousands of baby squid."

Question: The egg sac is mostly transparent and contains an optically dense structure with a very striking shape. If I didn't know it had hundreds of thousands of individual organisms, I'd think there was a brain developing at the top and a body forming below it. Is this shape just random? Does it change over time? Does it represent motion of all the little squids swimming around? It looks to me like it could be a slow-motion murmuration for example.

screenshots from the video linked above; click each for a full size view or just watch the video. 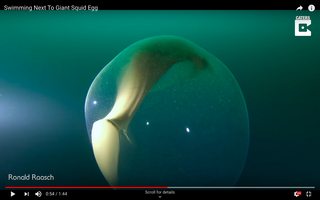 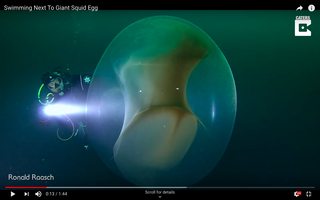 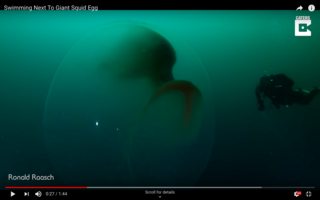 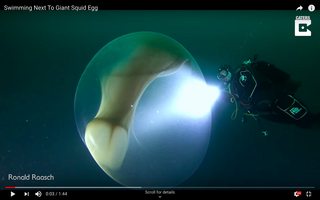 A team of divers filmed a rare glimpse of a huge transparent egg sac containing hundreds of thousands of baby squid.

The stunning underwater video was filmed by Ronald Raasch, 48, as he was diving with two other team-members from the research vessel REV Ocean in the cold waters outside Ørsta, Norway.

On October 5, the team of divers was swimming back to shore after visiting a WWII shipwreck about 200 metres from the coast, when they had a once-in-a-lifetime encounter with a mysterious object.

Floating 17 metres below the surface and 15 metres above the ocean floor, was a giant transparent orb which the divers quickly identified as a 10-armed squid’s egg sac.

Browse other questions tagged reproduction anatomy eggs cephalopods or ask your own question.

1
What is the name of this type of inflorescence?
1
What is the developmental basis of the placental sac?
4
What causes the opaque green colour in Lepidoptera?
8
Why do OX5034 GM mosquitos require the presence of tetracycline to survive? What does the drug do in this case?