How can we digest lactose even though it has Beta glycosidic linkages?

Then how is it that we have an enzyme called Lactase to digest the Beta glycosidic linkages in lactose?

Also If we have evolutionarily developed Lactase ,Why didnt we develop "Cellulase " too ?

One simple reason is physical interaction. lactose is only composed of two sugars, while cellulose is giant network of interlocked sugars. Cellulose keeps the sugars tightly packed in three dimensions. even getting to the bonding site is difficult.

human and many other lactases are a huge molecules that would never be able to fit on to a cellulose chain, while cellulase of often a tiny molecule as enzymes go and the active site is not buried in the center. Compare the two enzymes. 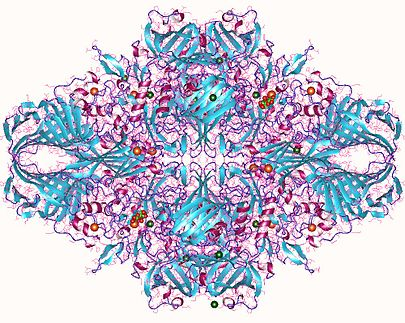 Note the big difference in size. Also look at cellulase in action. 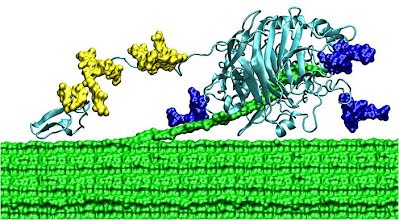 Notice it has to peel up the cellulose strip by strip, while lactose is just floating free in solution. This even limits the speed of cellulose breakdown. which means organisms that breakdown cellulose have to spend a log time doing it, while humans have a relatively short and fast digestive timeframe, so even if we could we would not get much from it.

These functional limits also makes a cellulase enzyme harder to evolve, since it can't be too large or in organisms with fast digestive processes. We often forget the physical necessities of enzyme function. there are plenty of other reasons enzymes do not function on multiple substrates, but this is why is basically impossible to for evolution to change lactase into a cellulose cleaving enzyme.

Not the answer you're looking for? Browse other questions tagged biochemistry enzymes digestion carbohydrates or ask your own question.

4
Classification of glycosidic anomeric bonds (alpha vs. beta)
3
Making sense of enzyme Km comparisons
2
How can you stabilize enzymes in pellets made from microcrystalline cellulose?
8
Human Digestion of Cellulose?
8
Why some cells don't produce purines?
4
Why can't amylase break down glycogen?
1
What molecules does amylase enzyme work on?
2
What allows grass eaters to digest cellulose?
0
How do enzymes not change the overall energy change of the reaction they're catalysing if they lower the activation energy?