How is plasmin formed from plasminogen?

In Ganong's Review of medical physiology it is mentioned that plasminogen is converted to active plasmin when tissue type plaminogen activator hydrolyses the bond between Arg560 and Valine 561. Can anyone show the molecular mechanism ? What happens to the two different parts of the hydrolysed chain.

Tissue plasminogen activator is a serine protease consisting of approximately 530 amino acids and about 13% carbohydrate.

This enzyme is made up of five domains performing different functions. The finger domain and the two kringle domains are involved in the binding of t-PA to fibrin, whereas the epidermal growth factor domain is responsible for activating EGF receptor. Kringle 1 also help in transport of this molecule via liver's endothelial cells. Kringle 2 also helps in binding with inactive plasminogen. The serine protease domain cleaves the plasminogen at Arg561-Val562 and activates it into plasmin.

Plasminogen is the precursor for synthesis of protease plasmin. Plasminogen is converted to plasmin by cleaving Arg561 and Val562. The activated plasmin is formed by making disulfide-linkage between these two polypeptide chains. 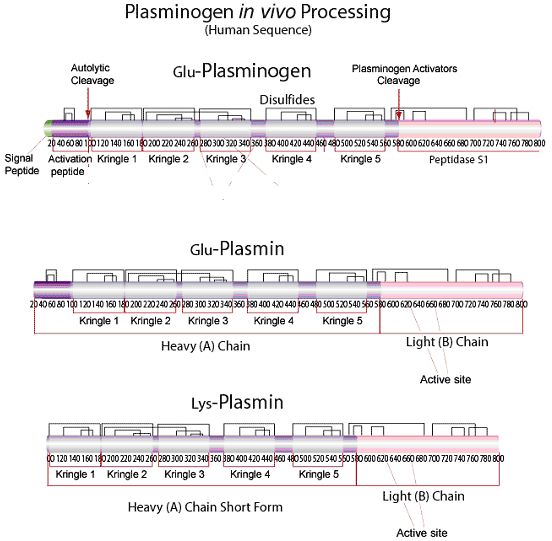 So, this proteolysis only produces one working peptide sequence, as the peptide bond cleaved and then amino acids are again joined by disulfide bond. And this peptide bond between arginine and valine is at 561/562 instead of 560/561 according to various sources.

Not the answer you're looking for? Browse other questions tagged enzymes hematology or ask your own question.

5
How are lysosome membranes protected from the attack of hydrolases?
5
Can antibodies be formed against white blood cells after blood transfusion?
4
Why don't individuals with sickle cell trait suffer from sickle cell anemia?
3
How does Hemocytoblast constantly get formed into so many blood cells and yet remains there in the bone marrow throughout the lifetime?
2
How can you stabilize enzymes in pellets made from microcrystalline cellulose?
7
How does a glucose molecule enter the cell from blood vessel?