Is there a definition of species where Lions and Tigers are the same species?

According to Species concepts

There are at least 26 recognized species concepts

And according to Why are lions and tigers considered different species (not sure how reliable this source is though, but I've seen exactly the same answer in another website)

The reason tigers and lions are different species is because of different behaviours, different habitats, different social hierarchies, and they each have their own subset of genes that they share within their species (like the genes for stripped fur or for manes).

Now, I'm not sure about "social hierarchies" (which I'm sure it's a fuzzy concept) , but there are different breeds of dogs with different behaviors, living in different habitats, and there has to be differences in genes in different breeds, since even in humans populations there are 1% of differences in genes and according to other sources more. Then my question is, since Tigers and Lions are closed to each other to the point they can produce offsprings, is there any of those 26 definitions of species where lions and tigers are the same species?

The concept this would fit under would be the "Biological Species Concept."

Concerning this concept, the Evolution site for Berkeley says "members of populations that actually or potentially interbreed in nature..." constitute a species. By this definition, since lions and tigers can (and do) interbreed, they would be considered the same species under this concept.

EDIT: As Bryan pointed out, though, lions and tigers do not breed outside of captivity. NatGeo and Britannica both second this. With this, then, the Biological Species Concept would not be viable.

EDIT2: With the above in mind, there don’t seem to be many options.

Mate-Recognition: This idea posits that organisms who “recognize one another as potential mates” (Wikipedia, “Species”) make up a species. By this, it could be argued lions and tigers are the same species, but I would be hesitant for this to be the concept, for the same reasons against the Biological Species Concept (not occurring in nature).

Ecological: Using this definition, a species is made up “of organisms adapted to a particular... niche, in the environment” (Wikipedia). Again, this is very fuzzy, as I wouldn’t define them in the same niche (though this might depend on how specific you get).

Conclusion: These seem to be the most likely, though that’s a very loose term. I couldn’t find any others that would fit nearly as well. I would say the answer is “no”, but I don’t think I found all of the concepts.

...is not entirely correct: lions (Panthera leo) and tigers (Panthera tigris) overlaped geographically in the past, since Panthera leo was common from western Europe to southeastern Asia. On top of that, if you consider that Panthera atrox is actually Panthera leo (which is the view of some paleonthologists), you can even add America to the list.

Until today there are (very few) lions in India (photo: Wikipedia): 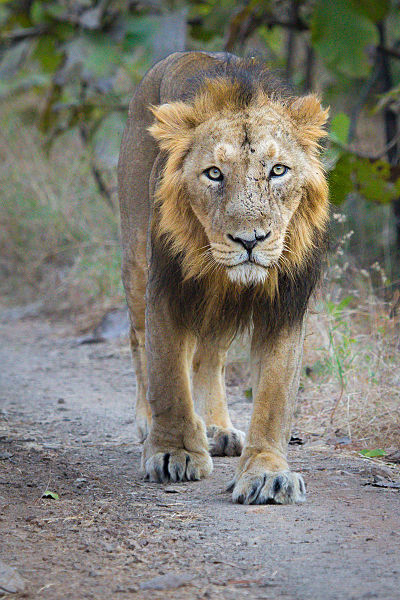 And, despite that geographic overlapping, lions and tigers do not breed, so we can clearly rule out Mayr's BSC.

Not the answer you're looking for? Browse other questions tagged species or ask your own question.

10
Why can't we call dog breeds different species?
4
Are there examples of now-living species where one is descended from the other?
4
Which requirements are needed for 2 different species to be able to have offsprings?
3
Practical Question about Evolution, Population Genetics and Speciation
0
what is “a group of living things that can interbreed and produce full interfertile offspring”?
0
Defining "species" (Are species an emergent property or an ensemble of quantitative differences?)