In lotka voltera predator prey model, why do we get a straight isocline with variable prey/predator population for single value of corresponding predator/prey?

I understand that we get the prey isocline by the equation 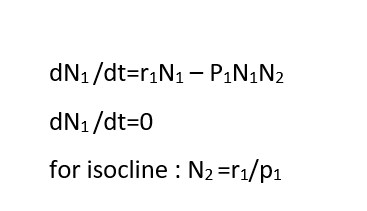 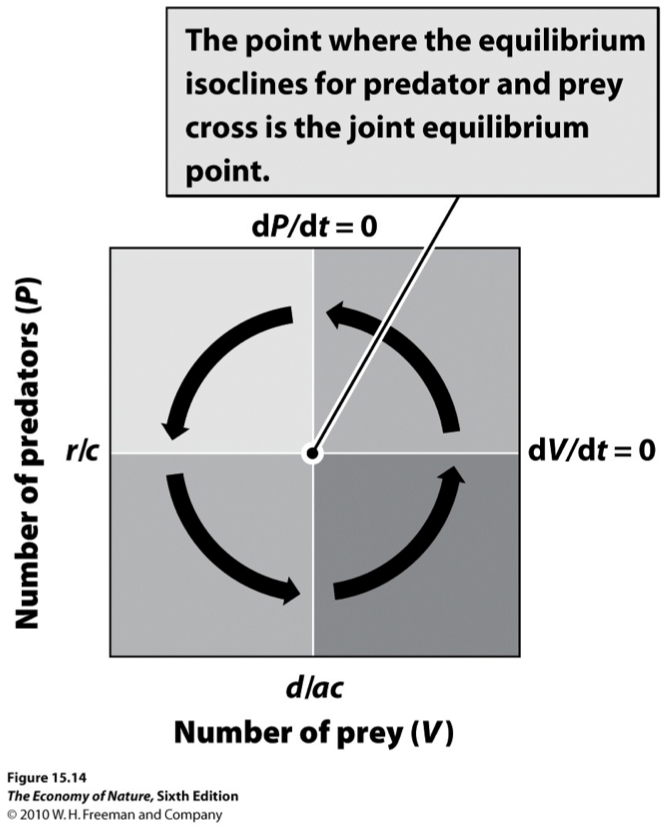 PS: I picked the graph image from the internet so the symbols are different. Sorry.

I think your issue is mainly with the interpretation of the isoclines.

If you assume this standard predator-prey model:

A graphical view of only the prey isocline (with some color coding) can be: 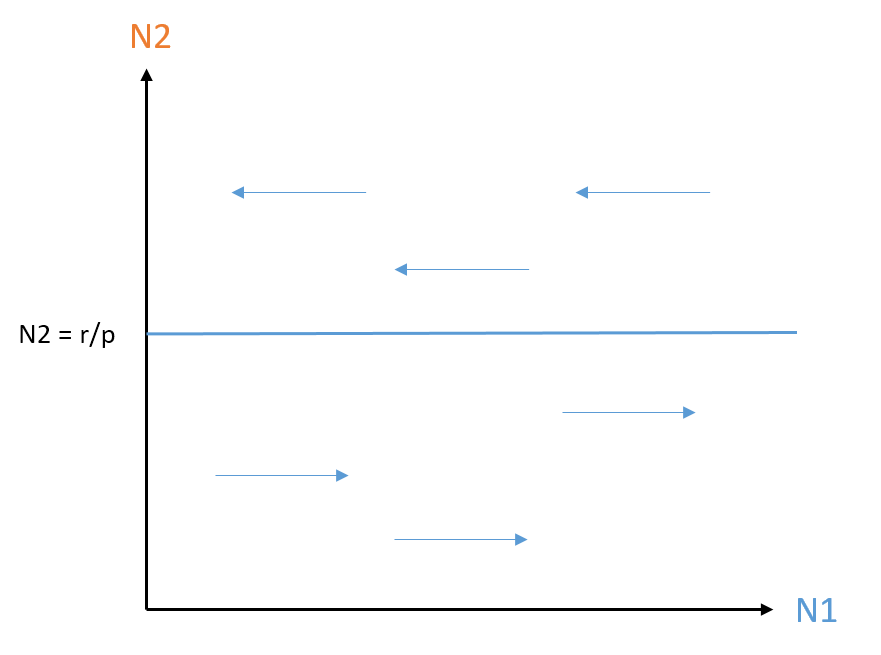 The same picture for the predator population is: 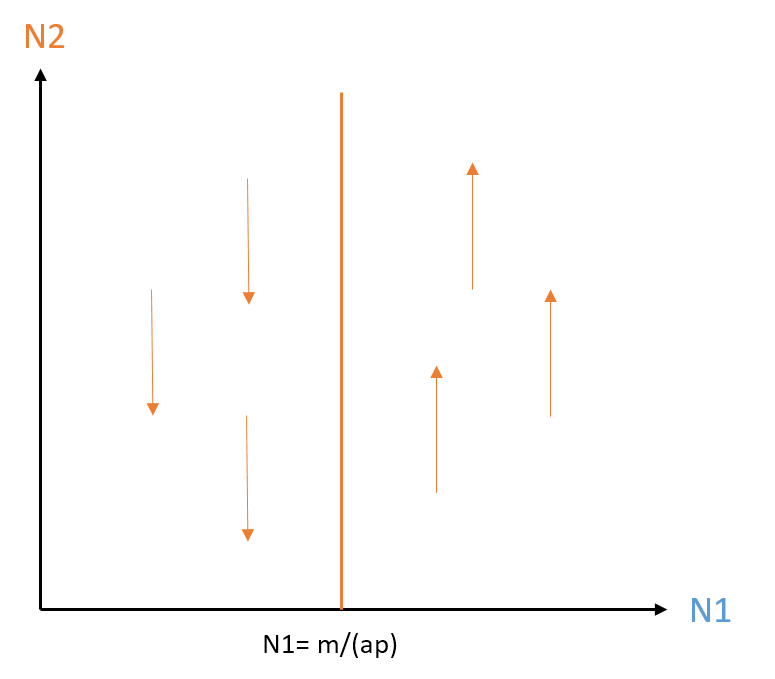 If you combine these you get this, with the black arrows showing the overall direction of the combined population trajectories: 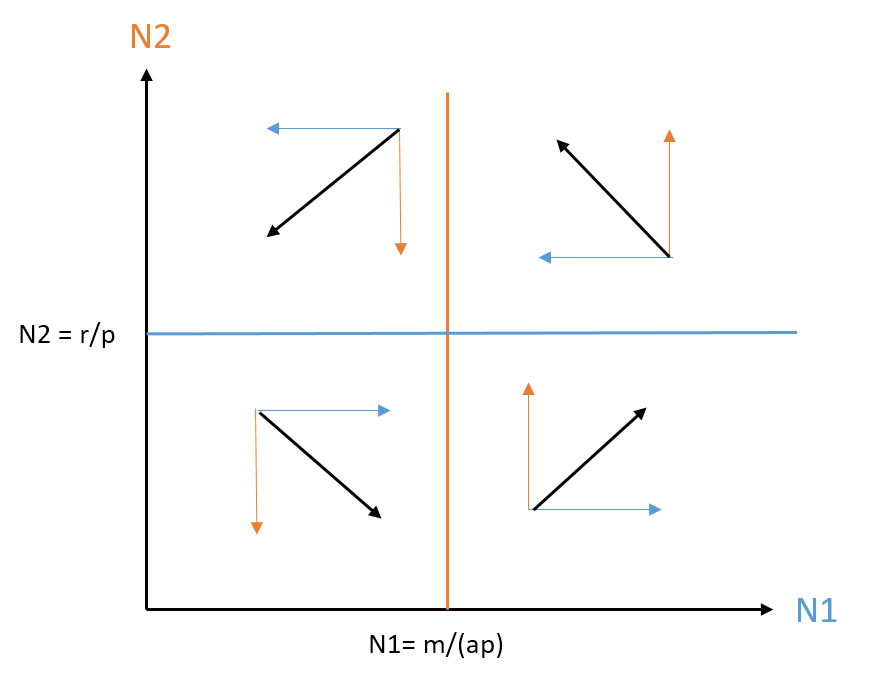 I hope this clarifies the issue a bit. Otherwise, please comment and hightlight what parts you find unclear.

Also, the dynamics of this Lotka-Volterra model also means that populations that start exactly at the intersection of the isoclines (i.e. both N1 and N2 will lie at that point) will stay there, since that is an (unstable) equilibrium point. Populations that are started anywhere else in this plane (except for cases where N1 and/or N2 is zero), will follow an oscillating population trajectory, that will not change if there isn't any external pertubations (environmental changes, input/output through immigration/emmigration etc). Therefore, the combined trajectories of N1 and N2 will form an ellipse in the plane, until they are perturbed (by something outside the current model), when they will then settle at a new ellipsis. For examples of the ellipses, see this phase-plane graph from Wikipedia, with initial values as points: 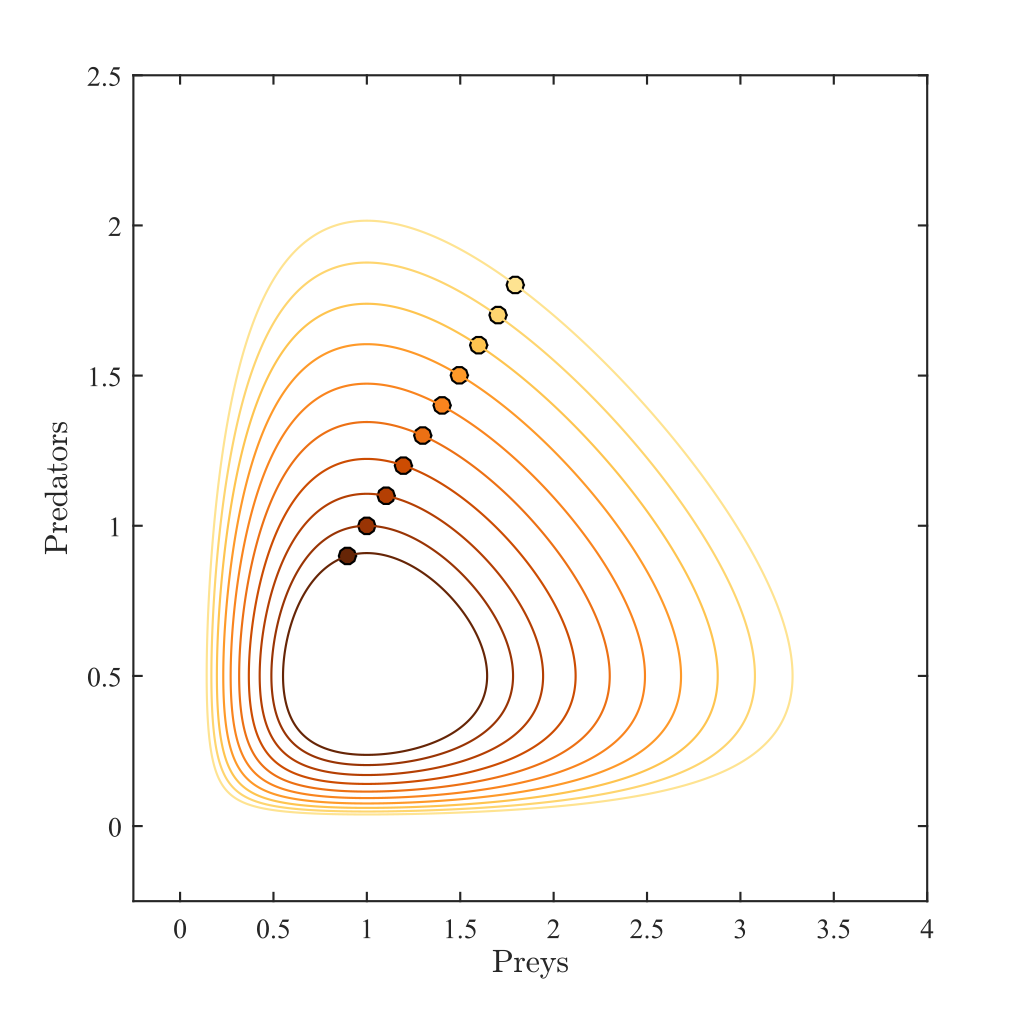 However, also note that changing the model, i.e. to include a logistic component to the prey population, will completely change the population dynamics.

I am going to try and cover the math with a few more words, to show that your intuition is in fact, correct (which with math, is not always given).

Hence, intuitively, as the predators become more efficient, by increasing $p_1$, the prey population cannot grow exponentially grow to infinity any more. It must now level off (as the solution of (1) will show you, if you keep $N_2$ constant, see also the logistic function "In ecology: modeling population growth").
And the stable value towards which it is leveling off, is given by the requirement $\frac{d N_1}{dt} =0$, which leads us to the isocline $0=r_1-p_1N_2$.

Now, coming back to your question, it is important to notice that by requiring $\frac{d N_1}{dt} =0$, we have already set $N_1=const.$, we just have no means yet to compute this value.
So the prey population is in fact constant! And the predator population that can live off this unknown value is given by the ratio of prey multiplication vs. hunting efficiency, which is the isocline.

As a last comment, it is strange that an equation for $N_1$ turns out to give us the most information about $N_2$, but that's how it often is with coupled differential equations.

6
Premise of life cycle synchronization between predator and prey
10
Why are the fertility rates of large predators kept low?
8
Can we use differential equations for population that is discrete?
4
Modeling population growth - Variance
3
How do I determine this logistic growth model formula?
2
What is a partial regulator?
1
Confusion about Lotka_Volterra model for two competing species
5
On stochastic Lotka-Volterra predator-prey model
4
Interpreting replicator dynamic for simplest population model