What is the role of the pyrrolidine/piperidine moieties in fagopyrins?

Fagopyrins are phototoxic compounds that cause fagopyrism. They are chemical compounds related to hypericin and pseudohypericin. Some variations lack one or both methyl groups, which I think is to streamline the molecule so it better fits in membranes and so increase damage. The main difference from (pseudo)hypericin though is the presence of pyrrolidine or piperidine (or both) moieties, which may come from L-proline and L-piperidine-1-carboxylate (in turn from L-lysine) respectively. So, what is the function of those moieties in the fagopyrin molecules? Does it render fagopyrins more toxic than (pseudo)hypericin?

Looking at the molecules they are highly conjugated —must be dark red or similar! And the disease is photosensitivity. Aromatics + UV? That is a standard UV radical reaction. It may be enough as a catalyst, but you'll get more will a cyclic amine, such as pyrrolidine or piperidine. If you want to go technical confer: Hofmann–Löffler reaction.

The radical will be passed on to other molecules, such as oxygen (generating peroxide), which will damage DNA and will raise an alarm biologically ultimately attracting neutrophils, which are expecting some attack (not poisoning), thus causing local inflammation, which manifests as skin irritation.

With the caveat that secondary metabolism is highly promiscuous and that some modifications are more accidental that anything else, let's look at the methylation and membrane permeability.

This figure I found has the methylation patterns. A first glance I have assumed it was the usual C-methyltransferase action adding methyl groups, but instead it is a removal twice in the case of fagopyrin B and once in C and D. Specifically, fagopyrin is clearly two condensed anthraquinones molecules (emodin?) —which is a rather interesting non-standard change, I have not looked but so hope that someone has found the enzyme responsible! As you point out an anthraquinone is made by polyketide synthesis: the last acetyl-CoA results in a methyl group on the aromatic structure, which is occassionally oxidised to a carboxyl group (e.g. rhein) and in this case decarboxylated —I do not think a C-methyltransferase can remove groups even with pushed stoichiometries nor do I believe I have heard of one. But anyway. The anthraquinone condensing enzyme may not be able to tell apart the standard and the demethylated metabolites, which is otherwise meant for another pathway, i.e. it could just be promiscuous.

Wikipedia has the SMILES string for the main fagopyrin and it's easy to spot the methyl groups. 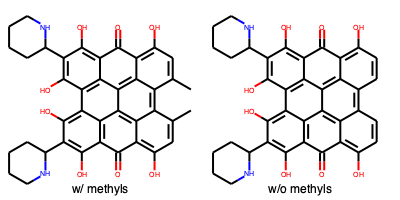 They are really soluble in octanol and insoluble in water. The unmethylated version is less hydrophobic.

Let's look at what is causing the difference by looking at the Crippen contributions to logP. Using the BluePurple colormap (suggestions welcome for best colormap for this descriptor), so that purple is hydrophobic while light blue is hydrophilic. Note that this is not partial charge (Gasteiger). 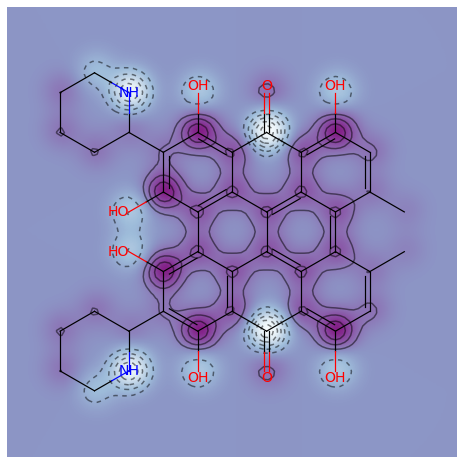 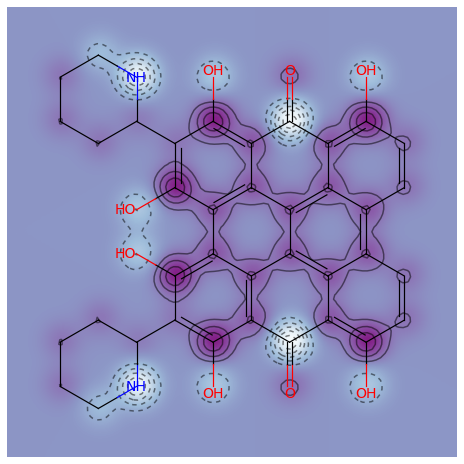 The difference is a result of the methyl groups, being slightly more electron withdrawing than hydrogens making the carbon between it and the hydroxyl/ketone more hydrophobic. But overall does not change the polar sides, so is in effect unlikely to have an effect on its high membrane permeability.

Not the answer you're looking for? Browse other questions tagged biochemistry botany toxicology or ask your own question.

10
What role does a protein's size have on protein-protein interactions?
2
What are the biochemical interactions between human body and Polyethylene?
7
Why doesn't the herbicide 2,4-D damage lawn grass?
34
Ripening bananas artificially: What is the biological theory behind?
14
Do electromagnetic waves outside the visible spectrum have any role in photosynthesis?
3
What are the mechanistics of stinging nettles?
3
What is the role of glycine in the running buffer for SDS-polyacrylamide gel electrophoresis
3
What's the role of bromelain in pineapple?