A theory about the possible connection between protists and first animalia

I learnt that organisms within Kingdom Animalia can be either microanimals or (nonmicro)animals.

I also learnt that the difference between a protist to a microanimal, is that the latter does have specialized cells, so that its body isn't seemingly just a cluster of cells in a given shape and can possibly do any other function that a protist can't do besides perhaps surviving by morphogensis (if either one isn't a function by itself).

Due to the similarity in shape and size of protists and microanimals, I ask if there is a theory and if it reflects a consensus, that microanimals were the first Animalia and were indeed evolved out of protists?

Probably the most widely accepted (though certainly not fully accepted) theory of animal evolution is called the Colonial theory.

According to the Colonial theory of animal origins, the earliest animals (i.e., sponges) seem to have arisen from colonial protists called choanoflagellates forming an invaginated hollow, spherical colony.

However, other theories do exist: Syncytial Theory and the Synzoospore Theory (proposed by Mikhailov et al. (2009)1)

Regardless of these theories, no reasonable theory about the evolution of animals from protists would link such evolution to "microanimals" given that microanimals (as defined by the OP) is not a phylogenetic group but rather a term to describe microscopic animals from various taxonomic groups.

There seems to be strong morphological evidence that choanoflagellates are the closest protist relative to currently living animals -- specifically to the simplest group of animals: the sponges (phylum Porifera).

Specifically, we can see very similar characteristics between a choanoflagellate and a choanocyte (or "collar cell") of a sponge. 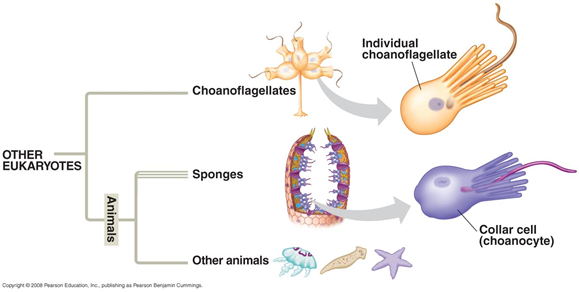 The choanoflagellates often form colonies consisting of numerous protists adhering to one another using adhesion proteins.

Due to the morphological similarities between choanoflagellates and choanocytes of sponges (along with similarities in adhesion proteins and signaling proteins shared between both), and the regular colony-forming tendencies of choanoflaggelates, it has been long suspected that the evolution of multicellular animals arose from these protists.

Ernst Haeckel (1874) was the first to propose that colony-forming chonaoflaggelates were the precursor to modern animals in a theory he called the Gastraea theory and which is now called the Colonial Theory of animal evolution. This thoery is summarized simply by Mikhailov et al. (2009)1:

According to Ernst Haeckel, the transition from unicellularity to multicellularity proceeded through two consecutive stages (Fig. 1A). First, unicellular flagellates aggregated to form a hollow ballshaped floating colony of identical cells. This hypothetical stage was named the Blastaea to reflect its similarity with the blastula, an early stage in animal embryogenesis....

Haeckel named this hypothetical ancestral form the Gastraea, again to indicate its similarity with the gastrula stage in animal embryogenesis. According to Haeckel, extant cnidarians and sponges are the first direct descendants of the ancestral Gastraea,(11) because their body plans derive from two embryonic layers.

Below is an illustration of the Colonial Theory of animal origins:

I've cited two additional theories at the start of this answer (i.e., the Syncytial Theory and the Synzoospore Theory proposed by Mikhailov et al. (2009)1). For the sake of breviy, I will exclude further discussion of either theory here. Please feel free to visit my links/citations to learn more. I certaily encourage other users to provide answers describing such theories in more detail if they find doing so necessary and insightful for this post.

The term "microanimals" is simply referring to the size of the organism (i.e., that they need magnification for viewing) and not to any phylogenetic or evolutionary connection between these microscopic animals. Put differently, microscopic animals actually belong to a broad range of animal phyla -- in other words, they are not immediately related.

Given this information, I strongly doubt you will find a theory suggesting that "microanimals" (as defined) played a role in the transition from protists to Animals.

6
Are there known examples where an evolved mechanism "echoes" one originally provided by the environment?
10
Why is it thought that silicon based lifeforms never flourished on Earth?
4
Can a novel protein domain arise de novo in nature or did all protein domains evolve from a single ancestor?
3
How is Elysia chlorotica classified as an animal capable of photosynthesis?