I have searched the internet for the reaction mechanism of G6PD but couldn't find it, so I am asking whether anyone here knows its mechanism and whether they could recommend some sources that give detailed info about enzyme mechanisms generally.

I would be grateful for this because it seems difficult to find enzyme mechanisms on the internet.

I am not an enzymologist and this answer is based on work published in 1998, and the latest paper I consulted was 2000. Hence I cannot exclude the possibility that more recent work has modified the model shown here.

The general approach to elucidating the mechanism of action of enzymes has been as follows.

Historically, and before a structure is (or was) available:

The structure of glucose 6-phosphate dehydrogenase (G6PD) was published in 1994 by Rowland et al. in Structure 2:1073-1087. To test their hypothesis of the mechanism, Cosgrove and coworkers constructed performed site-directed mutagenesis on G6PD and determined the structure of the mutated protein. On the basis of this they published a paper in Biochemistry 1998 37:2759–67 in which they proposed the reaction mechanism shown below. 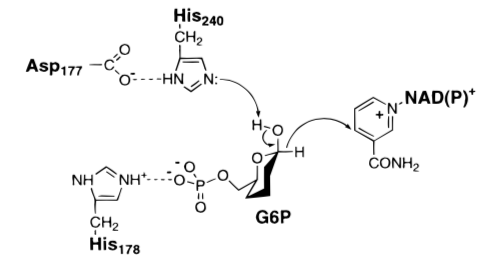 The Nδ1 atom of His-240 is hydrogen bonded to the Oδ1 atom of Asp-177, forming a catalytic dyad. The Nε2 of His-240 is poised to act as a general base by abstracting a proton from the C1-OH of G6P, allowing transfer of the C1-hydride to the C4 position of the nicotinamide ring of NAD(P)+.

They summarize this as follows:

“The results support a mechanism in which His-240 acts as the general base that abstracts the proton from the C1-hydroxyl group of glucose 6-phosphate, and the carboxylate group of Asp-177 stabilizes the positive charge that forms on His-240 in the transition state. The results also confirm the postulated role of His-178 in binding the phosphate moiety of glucose 6-phosphate.”

The classic text on enzyme mechanism is Alan Fersht’s Enzyme Structure and Mechanism published in 1984. This is clearly based on a limited range of enzymes, so its importance is not in finding the mechanism for a particular enzyme, but for understanding the principles involved. (You can pick up a second-hand copy very cheaply). Fersht has a more recent (2017) book in the same area — Structure and Mechanism in Protein Science but this is much more expensive. You can view the contents on Amazon.

Other suggestions are welcomed as comments.

My approach to searching for an answer here is worth mentioning as the question indicates the poster failed in his attempt. First I just did a Google search “reaction mechanism, glucose 6-phosphate dehydrogenase”. This wasn’t very useful, but alerted me to the fact that Google was prioritizing pages related to G6PD deficiency, a clinical condition on which much had been written. To avoid this I decided to focus specifically on structure, assuming that some of the papers would be proposing mechanisms. I tried three of the following four approaches (while idly waiting for a computer program to run).