what is the princlple of using DMS (Dimethylsulphate) for structural analysis of rRNA?

I am using DMS treated RNA with primer extension. I don't understand the basic principle of DMS reacting on RNA. can you please explain me.

I used this article for reference:

Here is a good explanation of the theory and chemistry behind DMS footprinting, from chapter 11 of Probing RNA structure within living cells :

In vivo chemical probing assay using dimethyl sulfate (DMS). (A) DMS methylates the N1 atom of adenosines and the N3 atom of cytosines. Both of these positions are located on the Watson–Crick face of the respective nucleotides. (B) Scheme of a structured RNA interacting with a protein ligand to exemplify residues accessible to DMS modification. (C) Mapping the modified positions by reverse transcription. The enzyme terminates the extension due to steric hindrance by the bulky methyl group at the Watson–Crick face of A and Cs. (D) The pool of cDNAs is separated on a standard denaturing gel. A and C denote the sequencing lanes, which are essential to map the modified positions. In addition, an RT control, which is prepared from RNA extracted from untreated cells, is essential to determine any natural stops of the RT (lane -). Comparison of the RT control lane with the cDNA pool created from DMS-modified RNA (lane +) reveals sites of modification. Note that the band resulting from a DMS modification migrates one nucleotide faster than the corresponding band in the sequencing lane, because the ddNTP is incorporated into the nascent cDNA, while the methyl group results in a stop one residue prior to the modification.

My take -- DMS adds a methyl group at the hydrogen-bonding face of exposed A and C bases. As and Cs protected by either proteins or base-pairing interactions are not methylated. Methylated bases inhibit reverse transcriptase, resulting in a truncated DNA product that can be visualized on a gel. Comparison to an untreated control allows for inference of which As and Cs of the RNA sequence are exposed and which are protected, from which the native RNA conformation can be inferred (or the possibilities greatly constrained). 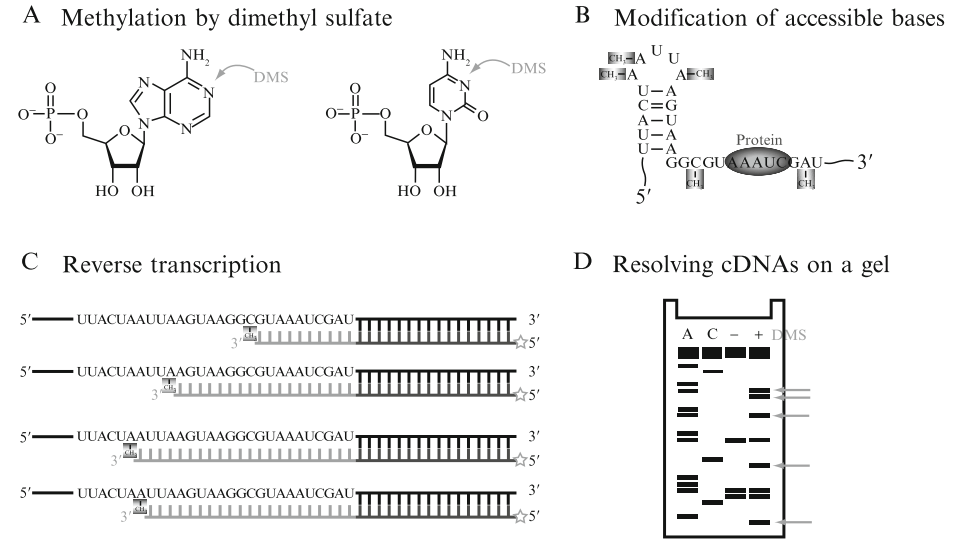 Not the answer you're looking for? Browse other questions tagged biochemistry molecular-biology rrna or ask your own question.

1
A question related to qPCR analysis
1
What are the problems in using an ssDNA or an mRNA for expression instead of using a plasmid?
1
What causes the variable/conserved structure in the 16S rRNA gene?
1
What are the structural factors affect enzyme's Km?
2
What is the structural difference between beta and gamma globin chains of Hb?
1
What are the uses of Helical Wheel Projections in Structural Biology?