Has anyone extracted a class of neurons (or a connected set of neurons) and stimulated them electrically to get an understanding of their behavior?

If so, could someone point me to papers along these lines? If not, do people have an idea of why this is not been technically feasible yet? As I would imagine this would be tremendously useful in building neuron models.

Short answer
Although outside my direct area of expertise, there is quite a lot of literature on the topic. The trick often is to use the correct keywords. Key in "recording + stimulating + ensemble + neurons", or "Utah + neuron + implant".

Background
There is quite some literature on this topic. For instance, a much used device in this arena is the Utah implant (Fig. 1), which can be used to record and also stimulate neurons (e.g., Nordhausen et al. (1994)). It has 100 penetrating electrodes and is even used in humans. There are also other approaches, e.g. by implanting a bunch of microwires (e.g., Nocolelis et al (1997)). In scientific jargon, the recording of multiple neurons simultaneously is often referred to as 'ensemble recording' (Nicolelis, 2008). 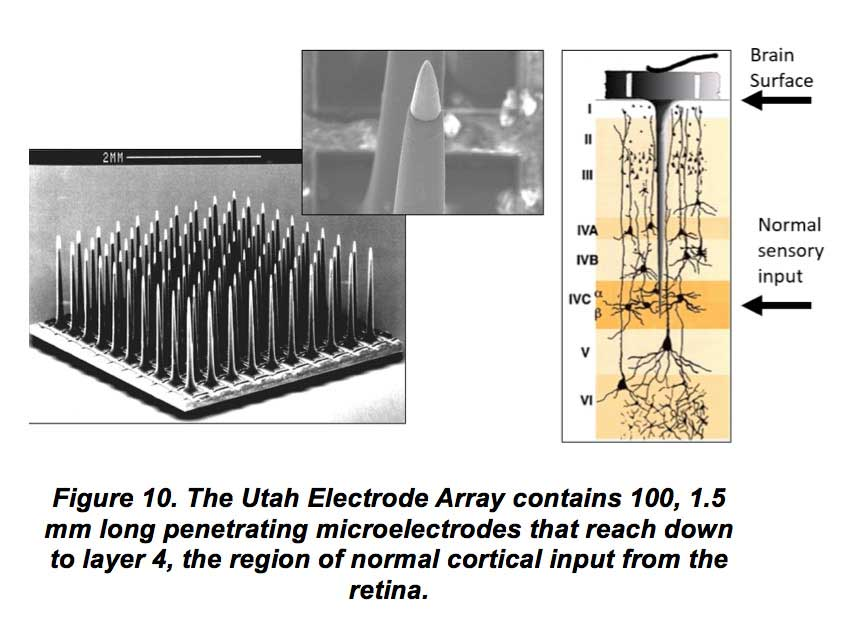 Not the answer you're looking for? Browse other questions tagged neuroscience neurophysiology electrical-stimulation or ask your own question.

3
Safe parameters for external nerve stimulation using electrical impulses
2
Why is stimulation of nerve tissue with a negative pulse called “cathodic” stimulation?
2
How does bath application of KCl depolarize a neuron?
1
Hopfield-like neuron assemblies
3
Can anyone explain the idea of anodic nerve stimulation?
1
loops in neuron synapses