Regulation of the TCA cycle and glycolysis by adenine nucleotides

Why is the tricarboxylic acid cycle regulated by the ADP/ATP ratio as stated in the following quote :

Isocitrate dehydrogenase is allosterically stimulated by ADP, which enhances the enzyme's affinity for substrates.1

while glycolysis is regulated by AMP/ATP ratio as in the following quote from the same book :

Why is AMP and not ADP the positive regulator of phosphofructokinase? When ATP is being utilized rapidly, the enzyme adenylate kinase (Section 9.4) can form ATP from ADP by the following reaction: 2

Glycolysis and the tricarboxylic acid cycle (TCA cycle) are distinct processes which are not necessarily linked sequentially. It is therefore not surprising that their modes of regulation are not identical and, in fact, involve far more complex regulation than mentioned in the question. The use of AMP rather than ADP as sensor of energy deficit depends on the action of adenylate kinase, which may differ between cytoplasm and mitochondria.

Relationship Between glycolysis and the TCA cycle

The expectation evident in the question that glycolysis and the TCA cycle should be controlled in exactly the same way assumes that either the two processes are inextricably linked or at least that the functioning of the TCA cycle is dependent on that of glycolysis. This is not the case, although the student can be excused this misimpression from the (perhaps unavoidable) way the topics are generally treated sequentially in text books of biochemistry.

The primary function of glycolysis is to produce ATP directly from ADP. The end-product of the pathway, pyruvate, is in some circumstances converted to acetyl CoA for the TCA cycle, and the NADH generated used for production of ATP generation via the electron transport chain (etc) and oxidative phosphorylation. However pyruvate has a variety of other possible fates depending on the type of organism or — in higher organisms — the tissue, and their overall metabolic requirements. For example in anaerobic metabolism — including exercising muscle tissue mentioned by the poster — the pyruvate may be reduced by reactions that regenerate NAD+ from NADH, e.g. conversion to lactate. It can serve as a precursor of the amino acids, alanine, valine and leucine. It can also be converted in the reaction catalysed by pyruvic carboxylase to oxaloacetate, the key intermediate that allows acetyl CoA to enter the TCA cycle. The importance of direct synthesis of oxaloacetate in this way is that it allows continuation of the cycle when intermediates are used for synthetic purposes (discussed below), in which circumstances oxaloacetate becomes depleted.

As regards the TCA cycle, there are sources of acetyl CoA other than pyruvate produced by glycolysis, and it has functions other than energy generation. Acetyl CoA can arise from the breakdown of fatty acids and of certain amino acids. In multicellular organisms, pyruvate can also be produced from lactate taken up from the blood, although in liver cells it is likely to be used for gluconeogenesis. And certain bacteria — acetic acid bacteria such as Acetobacter — can utilize the ethanol produced by fermentation in the TCA cycle. In addition to its function in energy generation some of its intermediates (α-ketoglutarate, succinyl CoA and oxaloacetate) are precursors of biosynthetic pathways, and the production of citrate from acetyl CoA is a means of transferring the latter out of the mitochondrion, where it is reconverted to acetyl CoA by the citrate cleavage enzyme (ATP citrate lyase).

The prime function of glycolysis is the direct generation of ATP (“at the substrate level”), and flux of glucose through it is controlled by the regulatory effects of both ATP (–ve) and AMP (+ve) on phosphofructokinase, which was established and rationalized by D. E. Atkinson (Biochemistry 1968, 7, 11, 4030-4034) in terms of a response to the overall energy charge of the system.

This arises from the ability of adenylate kinase to reconvert ADP to ATP: 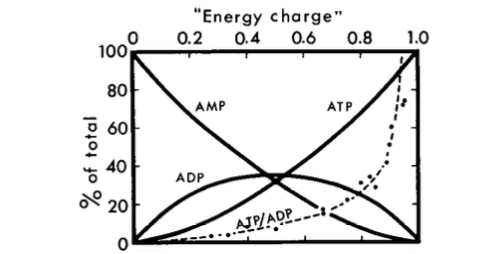 It can be seen that AMP is a much better indicator of low energy charge than ADP in the circumstances represented by the graph above.

Citrate is also a negative effector of the enzyme, providing co-ordination between glycolysis and the TCA cycle. (Hormonal regulation via protein phosphorylation occurs in the tissues of higher eukaryotes.)

Regulation of the conversion of pyruvate to acetyl CoA

In order to enter the TCA cycle, pyruvate needs to be converted to acetyl CoA by the pyruvate dehydrogenase complex. The regulation of this enzyme determines the extent to which this occurs, and, hence, the extent to which pyruvate is metabolized by other processes. Negative regulators here are high concentrations of the reaction products, acetyl CoA and NADH, although in higher eukaryotes hormonally induced protein phosphorylation is important.

Regulation of the TCA cycle

Then first regulatory enzyme of the TCA cycle, isocitrate dehydrogenase, responds to the concentration of the key molecules involved oxidative phosphorylation: it is stimulated by ADP and +, and inhibited by ATP and NADH. It is worth reflecting on the consequences of inhibition. If a build-up of citrate occurs, this can feed back and inhibit phosphofructokinase in glycolysis. However the citrate can move to the cytoplasm of eukaryotes and be converted to acetyl CoA (for fatty acid synthesis) by the citrate cleavage enzyme, which is stimulated by ATP and inhibited by ADP.

A later regulatory stage is α-ketoglutarate dehydrogenase, which is inhibited by ATP, NADH and its product, succinyl CoA. Inhibition of this enzyme would allow a build-up of α-ketoglutarate, which is a precursor of several amino acids.

This the existence of several regulatory steps in pyruvate oxidation and the TCA cycle allows the use of the cycle for both energy generation and as a source of synthetic precursors. Hence it should be evident why its control is similar to that of glycolysis in some respects, but exhibits key differences. 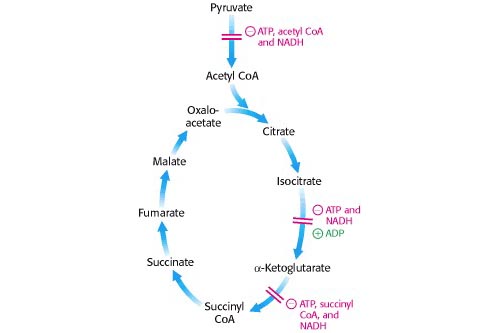 But why isn’t AMP a regulatory molecule in the TCA cycle?

Glycolysis and the TCA cycle do not need to march in step, although when they are both responding to the need for ATP their key enzymes are regulated by adenine nucleotides, among other molecules. The original question (or a modification of it) remains as to why is AMP a positive effector of phosphofructokinase, but not of isocitrate dehydrogenase, which responds to ADP. It is interesting that in the section of Berg et al. discussing the concept of energy charge, a rather lame rider is added without further explanation to the effect that the ATP/ADP ratio can also act as an index of energy status.

I don’t know for certain, but suspect that the conditions under which Atkinson’s equation for energy charge is valid do not hold in the mitochondrion. This is supported by Sobol et al. (1978) Eur J. Biochem. 87 377–390 who found concentrations of AMP in rat liver mitochondria to be much lower than would be expected from equilibration with ATP and ADP through the adenylate kinase reaction. They suggested additional reaction of AMP with GTP in the mitochondrion might be responsible and also cited reports that adenylate kinase was absent from the matrix of rat liver mitochondria. At least in rat liver, this would explain AMP would not be a useful regulatory molecule, whereas the ATP/ADP ratio would be indicative of the requirement for oxidative phosphorylation.

Not the answer you're looking for? Browse other questions tagged biochemistry metabolism enzymes homeostasis or ask your own question.