Why does absorption (at 260nm) of ssDNA increase with temperature?

In the graph below, I understand why A260 of double stranded DNA would increase with temperature increase, as more of the DNA becomes single stranded (and A260 of ssDNA is higher than that of dsDNA because the aromatic bases are more exposed, which absorb the light).

However, I do not understand why the absorbance of ssDNA also increases... I know that individual nucleotides also absorb more than ssDNA (as shown in "inequality" below), but I doubt that the covalent bonds holding the nucleotides are breaking at 80 degrees centigrade. Would this maybe be the effect of an increase in temperature increasing absorption? (I have read that increase in temperature increases collision of photons hence increases absorbance, but I am not quite sure). Thank you.

"inequality" showing which has higher A260: 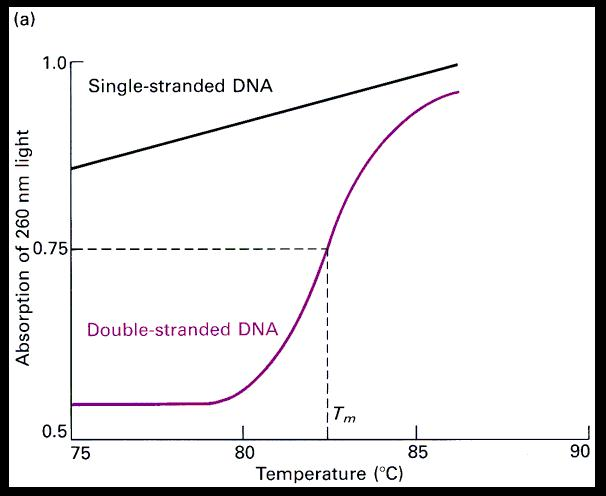 It seems canadianer's intuition is correct --

Base stacking still occurs in ssDNA, so I suspect that is why you see a temperature dependence

UV absorption-based measurement of DNA melting temperature is reliant on the assumption that the DNA duplex dissociates into the same single-stranded DNA (ssDNA) random coil conformations at all temperatures. However, calorimetry studies (citations 2 and 3 quoted below) have suggested that temperature-dependent conformational changes occur in ssDNA, too.

Early results from calorimetric studies on the dissociation of a 13-mer DNA duplex have shown, however, that the conformation of the single complementary ssDNA does depend on temperature (2). This was evident in the absolute difference between the heat of dissociation of a 13-mer DNA duplex of 490 kJ mol−1 determined at 74°C determined from differential scanning calorimeter (DSC) measurements and the heat of association of the duplex of −236 kJ mol−1 directly determined at 25°C from batch calorimetry measurements (2). This difference was attributed to the additional thermodynamic contributions from conformational changes in the complementary single strands implied from UV absorption changes upon heating solutions of each of the complementary strands from 25°C to 74°C.

Taken together, the SANS and calorimetry data suggest that the change in shape of the ssDNA with increasing temperature is due to unstacking of bases, corresponding to an endothermic transition.

These conformational changes correspond to the unstacking of the A and G purines as well as the T and C pyrimidines in 5′-ATGCTGATGC-3′ as the temperature is increased. The unstacking is manifested in molecular motion of the nucleotides in and out of the cylindrical axis (an increase in diameter) and in the stretching of the helix or cylinder (increase in pitch). The increase in the optical density upon melting of the single-strand substantiates the SANS results since the optical density changes indicate exposure of the purine and pyrimidine bases to a more polar (water) environment.

And, as with liliae's figure, the results of the ultraviolet absorbance scan show density increasing with increasing temperature. 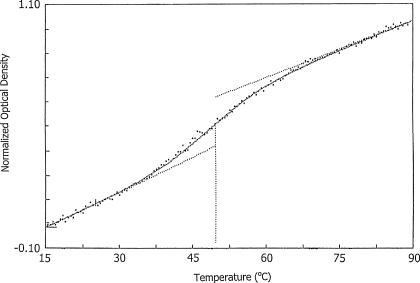 Figure 6. Normalized UVM scan of a 2-μM ssDNA solution. The solid line is the least-squares fit of a two-state, A↔B transition model to the data points. The broken horizontal lines are the extrapolated pre- and post-transitional base lines and the broken vertical line indicates the temperature at the midpoint of the transition.

Not the answer you're looking for? Browse other questions tagged biochemistry dna spectroscopy or ask your own question.

3
Does caffeine increase the speed at which sperm travels?
2
Why does the stability of YAC increase with size?
2
Single stranded DNA in gel electrophoresis
11
Why does A pair with T and G with C?
4
DNA sequencing problem
4
Why would mutation rates increase in a tumour?
11
Does the cell internal temperature changes in response to a change in external temperature?
0
How does dsDNA become ssDNA when binding to a nitrocellulose membrane?
7
Why does DNA mutate?
0
Why does Diphenylamine only react with the deoxyribose of purines?