What does it mean to share similarities among living organisms “both horizontally and vertically”?

I came across the following lines in a textbook (NCERT biology for class 11).

Systematic and monumental description of life forms, brought in, out of necessity, detailed systems of identification, nomenclature and classification. The biggest spin off of such studies was the recognition of the sharing of similarities among living organisms both horizontally and vertically

What does "both horizontally and vertically" mean?

Ben Bolker's comment is correct; the next sentence in the passage helps to clarify (bold added):

The biggest spin off of such studies was the recognition of the sharing of similarities among living organisms both horizontally and vertically. That all present day living organisms are related to each other and also to all organisms that ever lived on this earth, was a revelation which humbled man and led to cultural movements for conservation of biodiversity.

The relationship between species today and species that have existed in the past are the vertical relationships. For example, you could look at the skull of a modern horse and compare it to the skull of Mesohippus.

I've included a couple sources below that use this distinction, though I'm not sure where it originates.

I'd say the "horizontal" terminology comes up more frequently and may be more familiar, for example in reference to horizontal gene transfer one is talking about genetic material moving between species living at the same time. "Vertical gene transfer" can also be defined as the transmission of genetic information from parent to offspring, but more typically you would just call it inheritance.

share|improve this answer
answered Jan 9 at 21:57

Vertically means into the past and presumably future. How both fossils and genetics show relationships between ancestors and descendants. 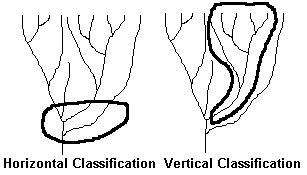 Basically the sentence is saying When you study biology and how organisms relate to one another, you see massive amounts of organized similarities in organisms both backwards through time and in extant animals inherited from common ancestors. these similarities form a predictable pattern best explained as a complex web of relatedness stretching backwards in time.

When you realize these and a lot of taxonomic terms originated from paleontology and thus ultimately geology, in which organism relationships were discussed before genetics were even discovered, it makes more sense. phylogenetic trees would have been overlaid on geologic sections. Horizontal groups were organisms in the same horizontal layer of rock thus presumably alive at the same time, vertical meant vertical depth in the rock which was of course different time periods, the deeper you go the further back in time you went. It is a poor choice of wording for a textbook, the less jargon the better, but completely normal in the scientific literature.

here is an example of one of those early combined geologic, taxonomic "trees" 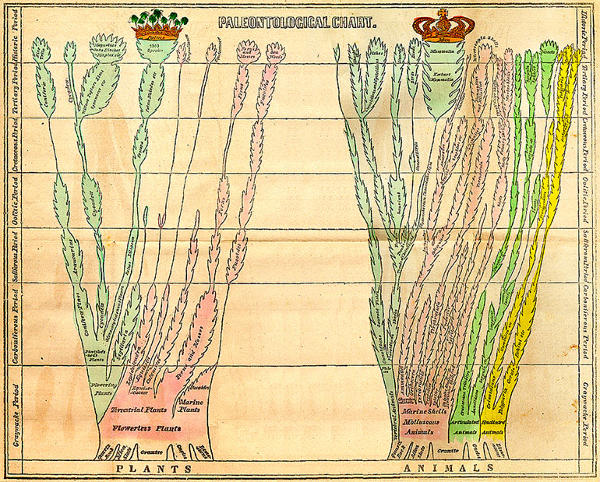 0
What does the species name 'fistula' mean?
5
In the NCBI Taxonomy tree what does “no rank” mean?
6
What does it mean to have square brackets around a genus name?