In vivo, does it take energy to move double bonds from cis to trans in long chain unsaturated fatty acids

In vivo, I understood that because all polyunsaturated fatty acids bonds are -cis they are crowded, kinking the molecule, and because of that, the oxidative enzymes cannot initially access them. They first have to be moved to the -trans side to allow the enzymes to act on the double bonds. So my first question: is ATP needed to move double bonds from -cis to -trans? And also, when the long-chain FA like EPA & DHA are oxidized, because of this energy expenditure to move them, wouldn't they yield less total bond energy when oxidized than if they were just oxidized in vitro, e.g. by heating?

If this is true, then how much ATP is used to first get those double bond groups into the -trans position so the oxidation enzymes can reach them? And … thus could I state that in vivo breaking of long chain polyunsaturated fatty acids would not yield as much energy as would in vitro breaking of these bonds?

As I understand it the question refers to mammalian oxidative degradation of dietary polyunsaturated fatty acids, as the diet is the major source of such fatty acids. Its concern is with two different aspects of this process neither of which involve the use of ATP. The proposition in the final paragraph is therefore incorrect.

The first aspect is not explicitly stated, but seems evident in the mention of the crowding of fatty acids with cis double bonds and the repetition of “in vivo”. I would rephrase it as:

How is the agglomeration of lipids disrupted so as to be available to the enzymes that degrade it?

This is as much physiology (not my field) as biochemistry, but there are many accounts available (e.g. this I found at random) regarding the emulsification of lipids by bile salts in the small intestine and their conversion to chylomicrons in the lymph and blood. The latter are either processed and stored in the adipose tissue and later oxidized when needed, or oxidized directly, in the mitochondria, especially of the liver.

The disruption of fatty acid aggregates is purely a physical process facilitated by the chemical environment in which they find themselves. This alone allows oxidative enzymes access. (In passing, I would say that it is difficult to conceive of a mechanism by which ATP could be used to disrupt a hydrophobic aggregate — see Appendix.)

The only stage at which ATP is required is the conversion of free fatty acids to fatty-acyl CoA by fatty acid thiokinase before reaction with carnitine and entry into the mitochondria in the form of acyl carnitine. In relation to the handling of hydrophobic molecules in a hydrophilic environment (or vice versa for membrane transport) it may be worth mentioning in passing that carnitine is a zwitterion.

This is described in standard biochemistry texts such as Berg et al., from which the diagram below is taken. 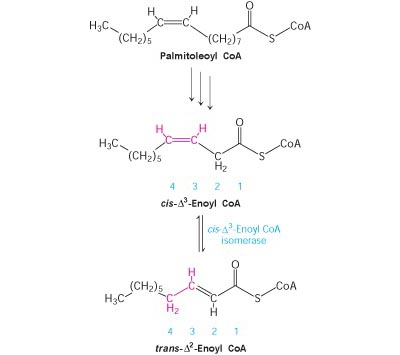 No ATP is involved.

Of course a reductase is required to catalyse the reduction of double bonds using NADPH as a reducing agent, regardless of whether they are cis or trans. As the related NADH can be oxidised in the electron transport chain to produce ATP by oxidative phosphorylation, this could be regarded as equivalent to using ATP. However this has nothing to do with the isomerisation.

Although this question includes some chemically correct references (the need for cis-trans isomerisation for unsaturated fatty acids to act as a substrate for acyl CoA dehydrogenase), it does raises some suspicions of an incomplete grasp of the factors affecting the viability of biochemical reactions and the role of ATP. If this is correct — and shared by others — I suggest reading an account of how the concept that the Gibbs free energy change of a chemical reaction determines whether or not it proceeds, and how the negative free energy change in the hydrolysis of ATP can be coupled to reactions that have an (otherwise unfavourable) positive free energy change.

Two points relevant to the question are worth mentioning in this regard. Although ATP can be used to cause motion, this involves motor proteins like myosin, kinesin and dynein interacting with large molecular structures. Thermal vibration and thermodynamics are the normal drivers of motion in a cell. The second is that many biochemical isomerisation reactions have standard free energy changes close to zero as, in isolation, the alternative structures have similar energies. What normally prevents the reaction proceeding is the activation energy barrier for the interconversion reaction of one isomer to the other, which is where enzymatic catalysis is comes in. The actual free energy change depends on the concentration of reactants and products, so if the cis isomer builds up and the trans product is removed by reaction then the reaction will proceed in the cis-to-trans direction.