What do oxpeckers eat from thick-skinned hippopotamuses and rhinoceroses?

Noted for their thick skin are both rhinoceroses (1.5 to 5 cm) and hippopotamuses (6 cm). They are further noted for their symbiotic relationship with bird called an oxpecker:

Both the English and scientific names arise from their habit of perching on large mammals (both wild and domesticated) such as cattle, zebras, impalas, hippopotamuses, or rhinoceroses, and giraffes, eating ticks, small insects, botfly larvae, and other parasites.
Oxpecker, Wikipedia

I feel like the thick skins of rhinoceroses and hippopotamuses would make them invulnerable to many parasites (such as those listed above), so I'm interested in finding out more specifically what oxpeckers eat from the skin of these two mammals.

Question: What do oxpeckers eat from thick-skinned hippopotamuses and rhinoceroses?

In the case of hippopotamuses, I feel like their semi-aquatic lifestyle would further impact many parasites. 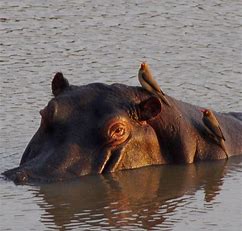 Browse other questions tagged zoology ecology diet symbiosis or ask your own question.

3
Can galls be formed from mutualistic relationships?
5
Why do blue jays eat my cat food?
16
Why Crocodiles don't eat Hippos?
8
Phoresis and mechanical vectors
34
What do butterflies eat?
1
Why do mountain gorilla eat just 1.7% fruit, while lowland gorillas eat 25%?
2
Why do people eat meat?
6
What benefits do sloths and manatees gain from algae growth on their fur/skin?