Is molecular oxygen (O₂) consumed in any process (in humans) other than acting as an electron acceptor for the ETC? [duplicate]

I know that molecular oxygen (O2) serves as the electron acceptor in Complex IV of the electron transport chain, which maintains the proton gradient that produces ATP for, as far as I know, every cell in the human body.

For clarification, there are probably well over a million oxygen-containing compounds, from water all the way up to the largest proteins, which perform repeatable roles in basically every system of the body. But in cases where oxygen is exhausted, specifically consumed requiring a continuous supply of new oxygen, what roles does oxygen serve with the exception of serving as electron acceptor in Complex IV of the electron transport chain?

Figure 1 from2 gives an overview of these reactions: 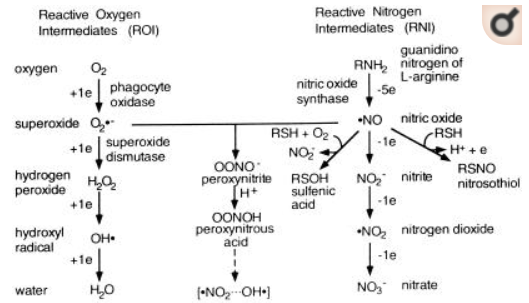 ROI and RNI production in mammalian cells via phox and NOS: parallel but connecting paths. Nitroxyl anion (NO−), a one-electron reduction product of nitric oxide (•NO), is unlikely to arise from •NO under physiologic conditions, but is considered by some investigators to be a primary and more toxic product of NOS. Reaction of RNI with cysteine sulfhydryls can lead either to S-nitrosylation or to oxidation to the sulfenic acid, as well as to disulfide bond formation (not shown), all of which are potentially reversible. Peroxynitrite anion (OONO−) and peroxynitrous acid (OONOH) have distinct patterns of reactivity, but for simplicity, the text refers to both as peroxynitrite. OONOH spontaneously decomposes via species resembling the reactive radicals, hydroxyl (OH•) and/or nitrogen dioxide (•NO2). When L-arginine is limiting, NOS can produce superoxide (O2⨪) along with •NO, favoring the formation of peroxynitrite.

2: Nathan, C., & Shiloh, M. U. (2000). Reactive oxygen and nitrogen intermediates in the relationship between mammalian hosts and microbial pathogens. Proceedings of the National Academy of Sciences, 97(16), 8841-8848.

Not the answer you're looking for? Browse other questions tagged human-biology mitochondria energy-metabolism or ask your own question.

40
What does the human body use oxygen for besides the final electron acceptor in the electron transport chain?

8
Why is oxygen needed for the electron transfer phosphorylation?
3
Can any gas other than nitrogen cause decompression sickness (the bends)?