Normal surplus of neurotransmitters and the need for retrograde signaling 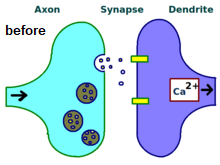 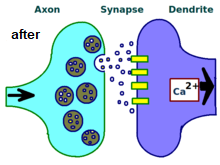 Only if there is evidence for presynaptic potentiation there would be a need to look for mechanisms of retrograde signaling (which still seem to be unknown, as well if they exist at all as what their specifics would be).

But before looking for evidence of presynaptic potentiation one question may be asked: How big is the surplus of neurotransmitters in a normal "juvenile non-potentiated" synapse? Being aware that an answer will depend heavily on what is meant with the words "normal", "juvenile", and "non-potentiated", I hope that it nevertheless may make sense to ask:

Instead of "(juvenile) non-potentiated" synapses one might consider "(adult) balanced synapses" with a "normal" surplus. Or even more generally "synapses before an LTP event starts"