Tryptophan side-chain structure, how should it be orientated?

I would like some clarification on whether it matters where the NH and double bond are placed in these two structures of tryptophan (W) that I drew. I marked the right side as correct and the left side as the incorrect one, but suddenly I am thinking that where you place the double bond and NH don't matter as long its placed in either orientation of the structure it should be tryptophan right?

Simply put, I took my chemistry classes a few years ago and don't remember if this changes the structure if I changed the position of the NH and double bonds, that is all, and would some clarification on it.

I noticed a mistake and re-drew the structure, but am still not clear about the so called "trivial" rotation mentioned. Does the new picture reflect whether or orientation not mattering? I am still confused if I drew it correct. 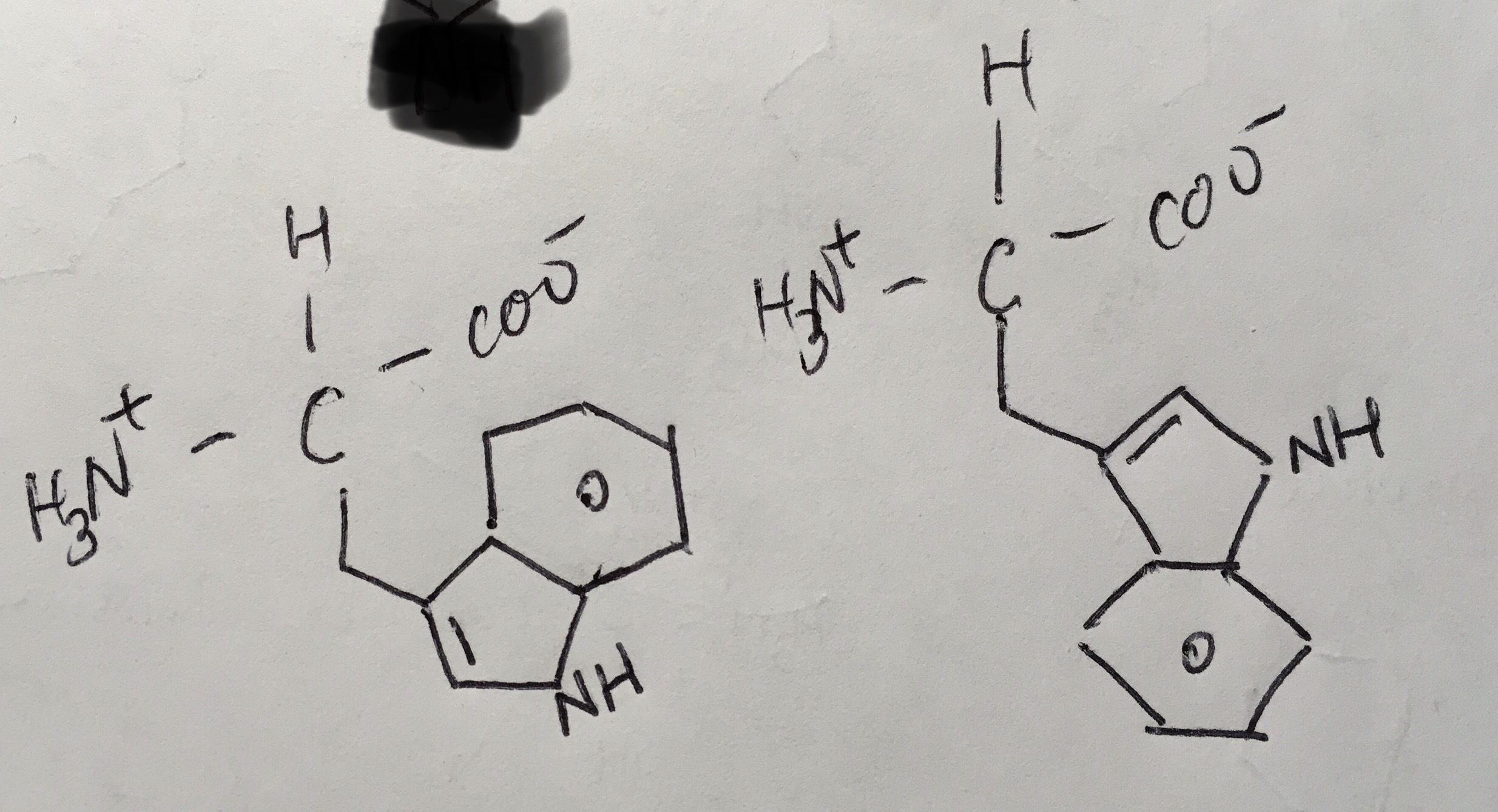 Basically, the side chain of amino acids can rotate as shown in the figure below for glutamate (Glu; E). The various option for side-chain rotation is called rotamers! Some amino-acids side chains have the potential of many rotamers (such as glutamate) while some can only adopt a few (such as tryptophan) due to steric restraints. You can read about it here on FolditWiki or in the article 'Rotamers: To be or not to be?: An Analysis of Amino Acid Side-chain Conformations in Globular Proteins'.

The set of amino acid side-chain conformations in globular proteins cannot be considered as normally distributed around some rotamer points. Outliers occur systematically. The rotamericity of an amino acid depends essentially on the different environments the amino acid meets in real protein structures. Factors such as the backbone torsion angles of the residue itself, the secondary structure and tertiary contacts influence the rotamericity. (...) 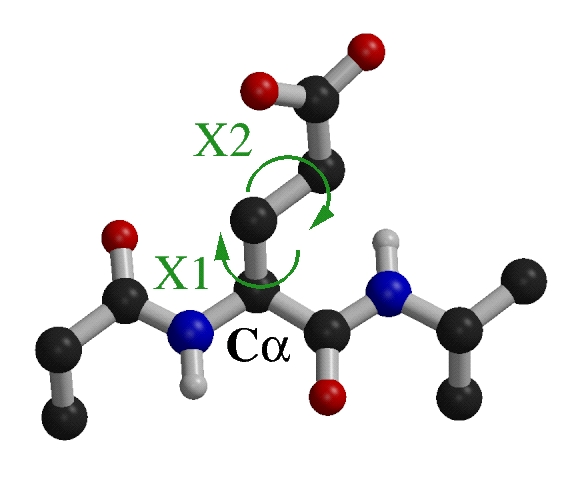 When solving a protein structure, scientists spend a lot of time on placing the amino-acid side chains into their correct rotamer position. Which rotamer a particular side chain should adapt, depend on the surrounding environments. Some amino acids side-chain are also very flexible and will move around the various rotamer position that they can adopt. In the example of glutamate (figure above), it would most likely adapt a rotamer position pointing either out towards solvents (if the the side chain is on the surface of the protein), or perhaps towards a positively charged amino acids side chain such as Arginine (R) or Lysine (K) to form salt-bridges or H-bonds.

In the case of Tryptophan (W), it is often involved in pi-stacking and would therefore be found in a rotamer position that stacks with other aromatic amino acids side chains. It is also a very bulky amino acid, and might therefore only have space in one particular conformation. Note that tryptophan (W) only has two rotamers, which are similar to the two that you drew in the updated figure, and again shown below. Note that both of these are correct, and that my hand-drawn bond angles are a bit off. These two rotamer options for tryptophan are even found in enzymes catalytic site, where the 'flipping' from one confirmation to the other is the key-mechanisms the allows substrates into or out of the active site! 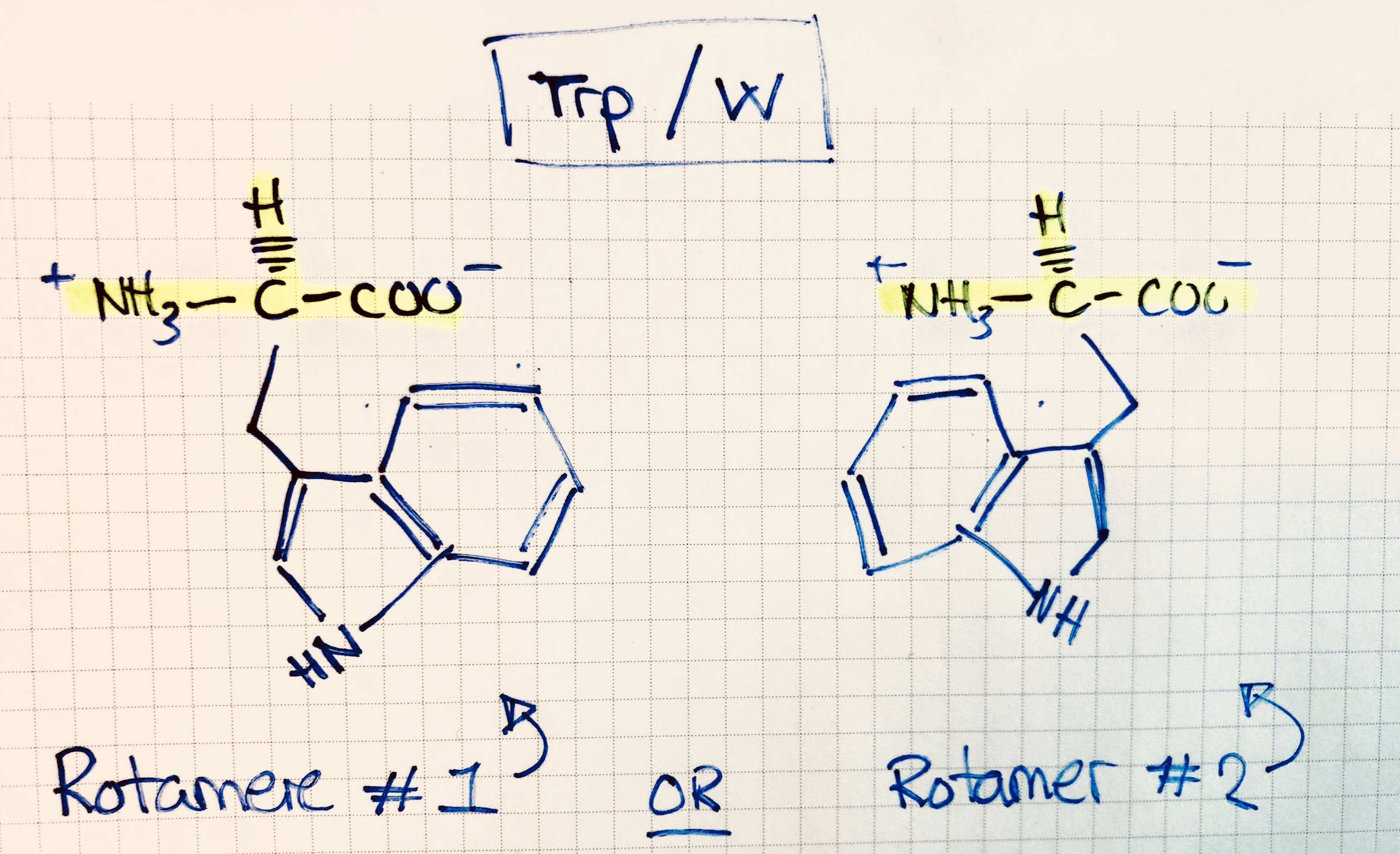 These structural arrangements are a lot easier to understand in three-dimensions, if you are still struggling then it could be a good idea to use a visualisation program (e.g. PyMol or Coot) and take a look at tryptophane's and other amino acids side chains by downloading some protein structure from the PDB database.

Here are also some related questions

Not the answer you're looking for? Browse other questions tagged biochemistry amino-acids structural-biology organic-chemistry or ask your own question.

14
How many human proteins have a solved 3D structure?
8
How does one calculate the resolution of a crystal structure?
3
Structure of RAP Antibodies (Specifically RAP-5)
7
Why is leucine amino acid used the most in proteins and tryptophan the least?
2
How do I know which molecular structure is glycine's "base state"?
2
Can two proteins have equal primary structure but different secondary structure?
1
It there any experimental approach to determine the electronic structure of a given aminoacid inside a protein?