Watching Netflix's "Night on Earth", I discovered that Hippos, or at least some Hippos, have quite a weird appearance in infrared. They seem to be covered by IR bright spots all over their body, possibly excluding their heads.

Something similar can be seen in this video on YT starting around 0:12. The following picture is a screenshot from that video: 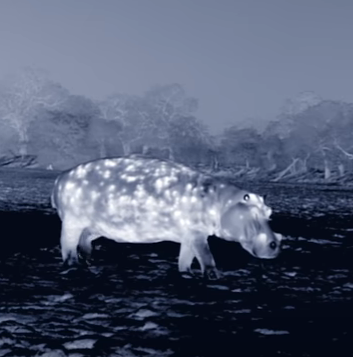 What's the reason for this weird pattern? Why are some spots on a hippo's skin warmer than the rest?

As far as I can tell, these images were taken without the use of IR illumination. The crew in the video linked above were apparently using a repurposed military thermal imager by Selex. As far as I know, these operate without any additional illumination.

@Harun suggested that this might be related to hippo sweat, which looks a bit like blood. But the images I could find (the one below is from here) do not seem to suggest that it forms spots comparable to those in the IR image. But maybe the secretion spreads around the glands it comes from and looks quite different in the IR. It also looks like they sweat on the head, which has a much more uniform appearance in the IR than the body. Of course these are all just single images, maybe not representative. 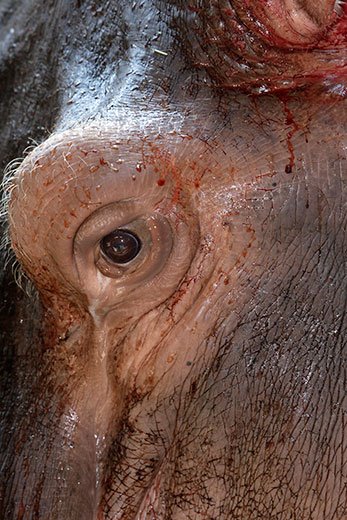 As the researchers found using a thermal camera and imaging software, there are distinct spots that can be observed in the hippo. the authors of the above mentioned paper infer that these higher temperature areas coincide with areas of rich blood flow and high nerve innervation, used to regulate blood flow and thus body temperature.

The authors also note that similar mechanisms are present in marine animals, such as seals.

Our findings demonstrate for the first time that the hippopotamus is able to open thermal windows. They appear in all body surfaces and vary in number, size and shape. Earlier histological examinations of hippopotamuses revealed a network of blood vessels deep within the dermis, and a thin epidermis, richly applied with nerve endings [3], suggesting an underlying thermoregulatory mechanism through nerval vasomotor control of the skin through connected arteriovenous anastomoses. These are referred to as specialized cutaneous vascular structures, densely innervated by sympathetic nerve fibres which permit local regulation of blood flow [4]. Arteriovenous anastomoses have been identified as thermoregulatory structures in the skin of seals [5] and presumably represent the underlying structures for thermal windows in the hippopotamus. Elephant, rhinoceros and hippopotamus are large herbivores, live in the same climatic region, and have almost hairless skin. Elephants show a great capacity for heat loss in the ears [6]. Contrary to the rhinoceros, the hippopotamus lack sweat glands but exhibits large sub dermal glands distributed over the body which release a red secret.

Following from Matthew Martin's citations, we can infer what kind of temperature management the "biological thermal windows" are for, as they travel through 4-5 inches of fat and leather:

If the hippos dwell in 25'C to 30'C water for much of the day and night, they can waste energy warming up, energy which can be spent on growing, rearing young, defending territory.

As changes in vascular perfusion are not energetically demanding, thermal windows broaden the temperature range in which endothermic organisms can regulate body temperature with minimum costs (the thermoneutral zone), particularly by extending its upper limit. https://www.ncbi.nlm.nih.gov/pmc/articles/PMC4843926/

Hippo's have spent millions of years as a water dwelling clade, their closest living relatives being dolphines, whales and porpoises. So the hippos are equipped with radiator-valves can let them stay warm in water for many hours and stay cool on on the riverbank.

16
Why Crocodiles don't eat Hippos?
8
Are there animal species that sense infrared light with their eyes?
1
Identify an animal (Japan, urban area)
34
Why didn't Escobar's hippos introduced in a single event die out due to inbreeding