How exactly can a drug affecting squalene epoxidase affect the methylation cycle, necessitating the use of 5-MTHF?

I found a case report in which the authors say that Terbinafine might have possibly affected the methylation cycle in a patient, necessitating the prescription of 5-methylfolate to correct the imbalance. I tried googling to find some description that would include the interaction of ergosterol synthesis and methylation cycle, and found nothing.

Maybe I was not googling the right words.

I can't seem to find how exactly we can affect the methylation cycle by affecting squalene epoxidase (the target of terbinafine, the drug used by the patient in the case report).

The article quoted is titled Antifolates and MTHFR (Trachtman and Pagano, 2015) 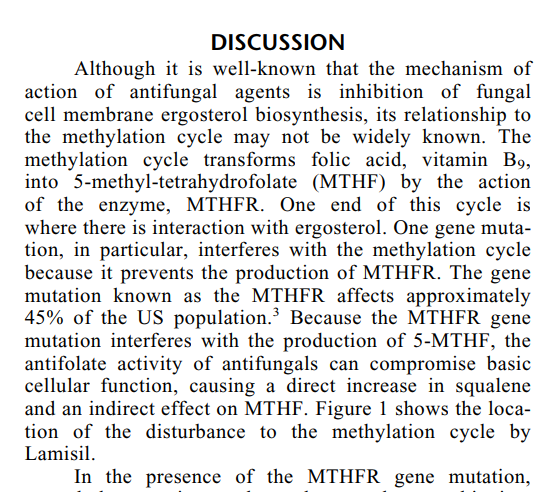 I have tried to follow the logic of the rationalization of the clinical case described in the report of Trachtman and Pagano, but have failed. I suspect from the quality of their biochemical illustration (arrows leading from compounds to enzymes, and talk about ends of cycles) that they do not have a clear idea themselves. However, having done the literature search, let me set out the picture as I see it, in the hope that this may enable someone else to see a connection I may have missed.

As the poster states, anti-fungals such as terbinafine do act by inhibiting the synthesis of ergosterol, which is a cell-membrane steroid, unique to yeast. Of relevance to this analysis, there is a methylation reaction in this pathway, that lies after the target of terbinafine, squalene epoxidase:

Inhibition of ergosterol synthesis can affect S-adenosyl methionine in yeast

What is the relevance of this to methylation in humans?

Although the situation described above confirms a connection between the methylation cycle and ergosterol intermediates in yeast, as mentioned in the original clinical report, it is difficult to see how it relates to human metabolism. This is because, although squalene epoxidase does exist in man, the ergosterol synthesis pathway and the methylation step catalysed by the methyltransferase (the erg6 gene product) do not. In any case, inhibition of a methylation step would result in an increase in SAM, whereas just the opposite appears to be the case in the patient.

The clinical report is of one patient with a mutation (MTHFR) in the methylene tetrahydrofolate reductase gene, which would reduce his ability to regenerate the methionine and S-adenosyl methionine needed for methylation. L-methylfolate greatly reduced his symptoms. Nevertheless, this report is for a single patient, whereas “The gene mutation known as the MTHFR affects approximately 45% of the US population”. If MTHFR were the only factor involved in this case one would expect other reports of adverse reaction to terbinafine. In the apparent absence of such reports one suspects that in this patient the affect of terbinafine — whatever it may be — involves some other, yet undiscovered metabolic interaction.

Not the answer you're looking for? Browse other questions tagged biochemistry human-genetics pharmacology or ask your own question.

11
Does current evidence support the use of resveratrol as an anti-ageing drug?
13
How do you design a drug to be delivered to the CNS?
1
How does salinity affect the bonds of an enzyme?
2
How to define drug-resistant or -sensitive cell line when knowing the IC50 values?
4
How exactly is glyceraldehyde 3-Phosphate reverted to ribulose 1,5-bisphosphate for the continuation of the calvin cycle?
0
Does the use of RNA as a primer affect the accuracy of DNA replication in E.coli?
7
How many molecules NADH are produced in the Krebs Cycle?
1
How could this molecule affect the body? (Lysergic acid derivative)