Is there any disease in common between human and insects?

I am not asking about disease transferred by insects.

I am wondering is there any disease that commonly make both human and insects sick?

It is always difficult to prove that something does not happen, so I will restrict myself to saying that I know of no examples and think it unlikely that there will be a common viral or bacterial disease of human and insects.

Viruses are not limited to a single host, but the typical host range of mammalian viruses would not appear to extend to insects, as far as one can tell from the literature — see e.g. the Wikipedia entry on Virus.

Viruses are by far the most abundant biological entities on Earth and they outnumber all the others put together.[134] They infect all types of cellular life including animals, plants, bacteria and fungi.[3] Different types of viruses can infect only a limited range of hosts and many are species-specific. Some, such as smallpox virus for example, can infect only one species—in this case humans,[135] and are said to have a narrow host range. Other viruses, such as rabies virus, can infect different species of mammals and are said to have a broad range.[136] The viruses that infect plants are harmless to animals, and most viruses that infect other animals are harmless to humans.[137]

Likewise for the host range of bacterial pathogens, judging from articles such as an article by Baümler and Fang in the Cold Spring Harbor Perspective on Medicine.

One general molecular reason for expecting a limited host range that would exclude insect/human pathogens relates to the means by which the pathogens enter the host cells. Quoting, for example, from the abstract of an article by JM Casasnova:

To initiate the infective cycle, the viral genome must therefore translocate from the viral particle to the cytoplasm. Via distinct proteins or motifs in their outermost shell, the particles attach initially to specific molecules on the host cell surface. These virus receptors thus mediate penetration of the viral genome inside the cell, where the intracellular infective cycle starts. The presence of these receptors on the cell surface is a principal determinant of virus host tropism.

The membrane proteins that act as receptors generally differ between related members of a species, but mutations can allow the viruses to cross species barriers. However the extreme difference in cellular structure and biochemistry between insects and humans make it unlikely that this could happen, even if the cell type and protein still exist in common. Consider, for example viruses such as Hepatitis A, B and C which infect the human liver. My own favourite insect — Drosophila melanogaster — does not have a liver as such, its functions being served by the insect fat body.

I am less familiar with other aspects of the viral life cycle that relate to physiology (my background is chemical) but these clearly differ and would affect modes of transmission, for example respiratory and sexual.

These latter considerations will also apply to pathogenic bacteria. As an anecdotal conclusion to an imperfect answer, I would mention the bacterial diseases of silkworms that affected the French silk industry in the 18th century. There are several accounts of Louis Pasteur being called in to eradicate the disease but these contain no suggestion that the workers breeding the worms contacted the disease. 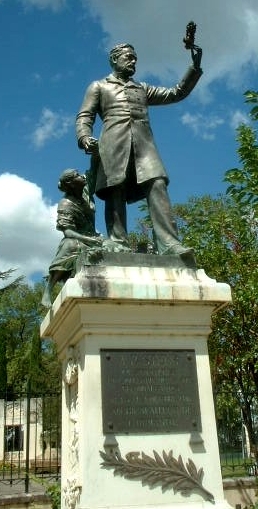 Tribute to Pasteur for ‘saving’ the silk industry at Ales, nr. Nîmes, France

Flaviviruses are an important group of virus, including yellow fever, dengue, zika, west nile, japanese encephalitis, tick-borne encephalitis. These viruses spread through the human population via arthropod vectors. The vectors have separate tubes for pulling blood in and injecting saliva; so in order to infect a vertebrate, the virus has to get from the blood meal in the arthropod vector's gut to its salivary glands where it can be injected into the next vertebrate host. This can only be done by infecting and reproducing in the tissues of the 'vector'. They can perhaps be more accurately thought of as a class of arthropod viruses which use a vertebrate vector in some cases:

the wide diversity of flavi-like viruses found in invertebrates, as well as their deep phylogenetic positions, suggests that they may represent the ancestral forms from which the vertebrate-infecting viruses evolved.

For west nile and Japanese encephalitis, humans are a dead-end host, that is, an infected human doesn't produce enough virus for a mosquito to get infected from feeding on them. As for how sick the arthropods themselves get from these infections, I wasn't able to find much information. West nile gets into the brains of infected mosquitoes, so I would expect significant pathology. However, if the mosquito is incapacitated it cannot bite a second host so there is evolutionary pressure for milder disease.

Few bacteria infect both humans and insects - though not many people care about keeping insects healthy.

Yersinia pestis causes plague in humans (and some other mammals) and in the Oriental rat flea can block the foregut. I don't know how bad that is for the flea, or whether this counts as a disease of insects.

There are some similar genera (groups) of bacteria living in and on both hosts; Clostridium, Lactobacillus, Enterococcus, Staphylococcus, Pseudomonas. The last has species on plants as well.

Not the answer you're looking for? Browse other questions tagged human-biology entomology pathology or ask your own question.

6
Can an infectious diseases come from a plant?
2
How do plants prevent infection from retroviruses?
-2
Are there any diseases that can harm and kill flies and mosquitoes?

6
Is there any reason the common housefly continues to return to an area?
12
Are there echolocating insects?
4
Is there a Lyme disease vaccine?
4
Is there any disease in adult human, other-than cancer, which-is resulted from mutation?
1
Is there a correlation between B12 deficiency and cardiovascular disease?
0
Are there any proteins not found in the brain that are affected by prions?