The anatomy textbook1 I use for my students states that the prefix meta- means "between:"

The metaphyses (me-TAF-i-sez; meta = between; singular is metaphysis) are the regions between the diaphysis and the epiphysis. [my emphasis added]

This sounds reasonable given the explanation. However, I have never seen meta- applied in this manner; more generally, the suffix meta- usually seems to refer to "after."

In fact, Dr. Toby Arnold's Glossary of Anatomy provides the following etymology of the word metaphysis:

metaphysis: Greek meta = after, and physis = growth; hence, the end of the shaft of a bone alongside the epiphysial or growth cartilage [again, my emphasis added]

The latter explanation is somewhat underwhelming, but the etymological usage fits more with my prior experience with meta-.

Can someone find a reputable source definitively indicating a clear anatomical/physiological explanation for why meta- was used in the case of "metaphysis"?

word-forming element of Greek origin meaning 1. "after, behind; among, between," 2. "changed, altered," 3. "higher, beyond;" from Greek meta (prep.) "in the midst of; in common with; by means of; between; in pursuit or quest of; after, next after, behind," in compounds most often meaning "change" of place, condition, etc. This is from PIE *me- "in the middle" (source also of German mit, Gothic miþ, Old English mið "with, together with, among"). Notion of "changing places with" probably led to senses "change of place, order, or nature," which was a principal meaning of the Greek word when used as a prefix (but also denoting "community, participation; in common with; pursuing"). (Etymonline)

The growth plate, or physis, is the translucent, cartilaginous disc separating the epiphysis from the metaphysis and is responsible for longitudinal growth of long bones. (The Royal's Children Hospital Melbourne)

Anatomically and physiologically, meta- in metaphysis means next after physis (growth plate or epiphyseal plate) and refers to the changing (growing) part, which is in between the non-growing parts of a long bone (diaphysis and epiphysis):

The metaphysis is the wider portion of a long bone adjacent to the epiphyseal plate. It is this part of the bone that grows during childhood; as it grows, it ossifies near the diaphysis and the epiphyses. (Orthopaedicsone) 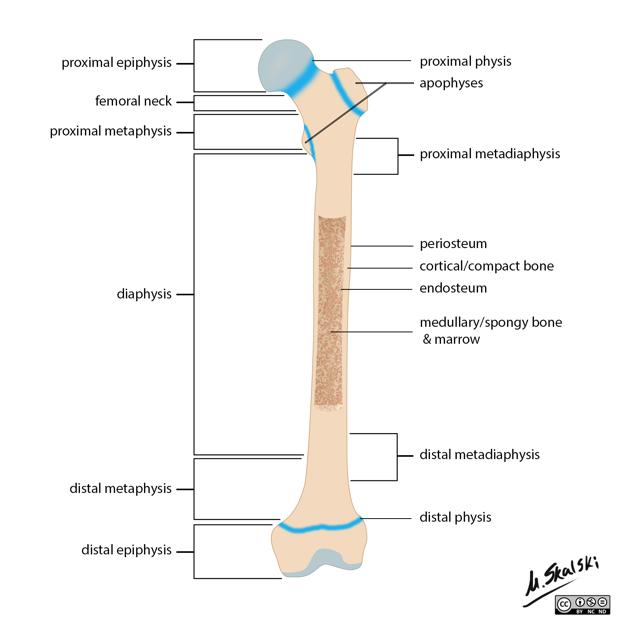 Not the answer you're looking for? Browse other questions tagged human-anatomy terminology anatomy etymology or ask your own question.

2
Etymology of the term monilophyte
2
Surgical vs anatomical neck
13
Using anatomical terms for human organs and parts of plants
3
Etymology of PAX proteins
4
Coracoid vs. Coronoid - Etymology/Naming Choice?
6
Are there any anatomy books focusing on etymology?
1
What does 'proper' mean in the anatomical context?
2
What is the etymology for Pinus halepensis?
2
Are "sympathetic nerves" the same as "cardiopulmonary splanchnic" nerves?