Why do patients with type 2 diabetes not show the body wasting seen in type 1 diabetics?

Type 1 diabetes results from the destruction of the cells in the pancreas that produce insulin, while type 2 diabetes is characterized by so-called "insulin resistance", presumably a reduced responsiveness of the body's tissues to the effect of insulin. More succinctly, in type 1 diabetes, insulin is not produced at all, while in type 2 diabetes, insulin is produced, but it is ineffective.

Based on this description, one would expect that type 1 and type 2 diabetes would look similar, with maybe type 2 diabetes being a milder form of the condition. This is not the case, however. The diseases are markedly different, at least when it comes to their effect on body weight. 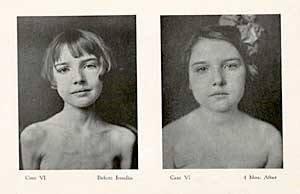 The images show a type 1 diabetes patient before and after insulin treatment.

In contrast, type 2 diabetes is associated with obesity, exactly the opposite scenario.

If the body does not respond to insulin in type 2 diabetes, why don't those afflicted waste away, in the way that (untreated) type 1 diabetes patients do?

The following is based on a conversation I had with a senior biochemist in my university who conducts grant-funded research on the relationship between diabetes and heart disease. It can be criticized for the paucity of external sources from which its veracity can be checked. However, although the question is based on a misconception I thought it should be addressed. Perhaps others could help improve the answer by supplying references etc.

The following points about Type 2 diabetes mellitus are relevant.

In the case of type2 diabetes the insulin production is not affected and cells cannot transport sugar fast enough, because they don't sense insulin properly. This results high insulin and high blood sugar levels. As the disease progresses, the insulin producing cells can die off and we can end up with a similar condition as we have in type1 diabetes.

Both have connections to weight. Insulin is a hormon that facilitates fat storage and fat conversion from sugar and it inhibits fat breakdown. So when insulin is low in type1 diabetes, then people have a hard time to gain weight. On the other hand insulin resistance is associated with obesity. So typically obese people suffer from type2 diabetes and they can lose weight as the disease progresses.

Not the answer you're looking for? Browse other questions tagged physiology metabolism human-physiology endocrinology or ask your own question.

5
Why our body does not produce polyunsaturated fatty acids?
2
Detailed mechanism of the cause of diabetes mellitus type 1?
8
Why antipyretics do not bring the body-temperature below normal?
3
Why is insulin given in type 2 diabetes?
0
What is (are) the medium of conduction for an electrical current with an external source in the human body?
1
Why do our bodies maintain blood pressure but not the flow rate?
4
Why is urea not converted to ammonia in the body?
2
What happens to glucose taken up by the liver in type 1 diabetes?