In the PR segment of an ECG, how come there's no current flowing?

I don't really know how to phrase the question, but to put it as clearly as I can, I don't get why it is the P wave "flattens down" when the atria have completely depolarized. I get that the charge is uniform across the atria, but the ventricles are still polarized (and therefore of a different charge compared to the now completely depolarized atria), wouldn't this create a difference in charge and therefore a voltage to produce a current? I think this GIF can help explain my question better: 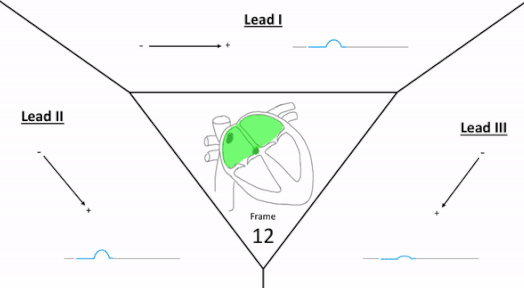 I don't understand why there's no current flow and no deflection on the ECG leads despite the charge difference. Rather, why does the GIF deal with the current and charge difference in the atria and ventricles separately? I thought this all might be because of the fibrous cardiac skeleton, which acts as an electrical insulator, but that doesn't make complete sense either; sure it prevent current flow within the heart, but it wouldn't influence current flow outside of it, right?

I'd suggest reading the rest of the Wikipedia article on EKG rather than focusing on the particular cartoon you are using right now, because that cartoon does not depict the dipoles that are measured.

The key interpretation that you are missing is that the signals measured are not voltage differences between intracellular compartments of the heart (like between the atria and ventricles, or between the depolarized and polarized part of one compartment), but a moving dipole created during polarization changes.

As the atria depolarize, there is a wave of negative extracellular charge as positive ions enter cells, creating a dipole: there is more negative charge at the most recently depolarized point than ahead of the wave where cells haven't yet depolarized. This is the signal you measure. If you were to pause this process at any moment, those extracellular charges are free to move and the potential dissipates quickly.

There is too much conductivity in the extracellular space for the dipole to be maintained without the rapid polarization changes that occur when ion channels open. You can think of this as a high-pass filter; the amplitude of the dipole measured would approach zero as the speed is reduced regardless of static differences in intracellular voltage measured against some reference.

This is what happens during the brief "pause" between atrial and ventricular contraction: there is still a dipole, but it is much smaller as it travels through the AV node than in the muscle and would only be measurable from local electrodes. You begin to see the signal again once the ventricles contract.

http://umdberg.pbworks.com/f/Hobbie-EKG-1.pdf may also be useful.

Not the answer you're looking for? Browse other questions tagged cardiology electrophysiology electrocardiography or ask your own question.

5
How does strength of a pulse related to EKG(ECG)?
4
How long do the periods of systole and diastole last?
8
How to analyse an ECG?
4
Explanation of ECG in MI using an electrostatic model
2
What are the highest and lowest amplitude values in ECG for humans?
1
Why is the current flow shown to be flowing from the negative area towards the positive area?