The Wikipedia page for rDNA says "Ribosomal DNA (rDNA) is a DNA sequence that codes for ribosomal RNA" Also, the figure next to it says "The gene segment of eukaryotic rDNA contains 18S, 5.8S, and 28S tracts and forms a tandem repetitive cluster". So, it gave me the impression that rDNA codes for both rRNA and the structural proteins of ribosome. Is that right?

As well as messenger RNA (mRNA) that encodes protein, there are a variety of RNAs that have structural or regulatory roles and do not code for protein. Ribosomal RNAs (rRNA) are one such structural RNA. Like mRNA, rRNA (and other stable RNAs) are specified by genes in the chromosomal DNA, although the details of their transcription (the RNA polymerase employed and the nature of the promotors) may vary.

The mature eukaryotic ribosome contains three species of rRNA that are analogous to those in prokaryotes — 18S (cf. 16S), 28S (cf. 23S) and 5S (sizes for mammals). However there is an additional 5.8S species in eukaryotes. The questions addressed in the article are: 1. What genes and what transcripts give rise to these mature RNA species? and 2. Is there a single gene for each species or multiple repeated genes? A third, implicit, question is whether the situation in eukaryotes is similar to that in eukaryotes.

The answer to question 2 is given in the phrase “forms a tandem repetitive cluster” — there are multiple copies of the genes for 18S, 28S and 5.8S rRNA, clustered together one after another. These genes are separated (‘spaced apart’) by regions of the genome that are not transcribed, and are termed non-transcribed spacers (NTS).

(There are also multiple copies of the 5S rRNA gene, although these are only clustered in some species.)

The situation in prokaryotes differs from eukaryotes in so far as the 5S rRNA gene is part of the gene/transcript containing the 16S and 23S rRNAs, lying at the 3′ end of this. This is mentioned in the Wikipedia entry for Ribosomal RNA, rather than that for ribosomal DNA, quoted in the question, and illustrated in the figure below taken from the teaching web pages of Ross Hardison at Penn State University. Notice the transfer RNA gene in the transcript between the portions resulting in the mature 16S and 23S rRNAs. 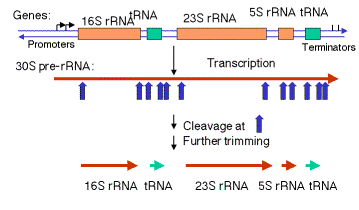 Not the answer you're looking for? Browse other questions tagged molecular-biology molecular-genetics rna or ask your own question.

44
Why do eukaryotic organisms have introns in their DNA?
5
Will eukaryotic RNA fold in the same way in prokaryotes?
4
Ribosomal RNA amount in a Drosophila cell
3
Ribosomal Turing Machines, DNA/RNA computation
0
What is meant by “Expression” of Non-Coding RNA?
1
Transcription Factor expression level
2
Differential Gene Expression
0
does small different between 16s ribosomal DNA leads to diffrence into protein products?
4
Microsatellites and Minisatellites: Which of these form the basis of DNA fingerprinting?