Which proteins are part of the most different protein complexes?

Let n be the number of different protein complexes (as defined here) that a protein may be a stable part of for a considerable amount of time (and not only transiently). Which proteins have the largest n?

An answer should include the number of different protein complexes the protein is part of.

Or where should I start doing my own research? I have no clue.

This answer does not address the number of complexes that a protein participates in, but rather a related question -- With how many proteins does a protein interact? I acknowledge this is a fundamentally different question, though I think it's a good starting point on which other people can build a better answer.

Since an organism isn't specified in the question or tags, this answer focuses on a simple and extensively studied model: E. coli. Taking the data from STRING v11 1 for all protein-protein interactions (PPIs) in Escherichia coli str. K-12 substr. MG1655, we can subset these PPIs to include only those of action type "binding". This database provides PPI scores between 0 and 1 based upon experiments (co-purification, co-crystallization, Y2H), textmining, co-occurence, co-expression, and co-localization of coding genes across genomes.

If we set no cutoff for the confidence in these binding interactions, we see that 2585 proteins have ≥1 binding partner, and one protein has an astonishing 273 binding partners (pfo, a putative pyruvate-flavodoxin oxidoreductase). Also, this database states this E. coli strain has 4127 distinct protein-coding genes, so approximately 63% (2585/4127) of genes encode a protein that interacts with at least one other distinct protein.

If we limit the interactions to those with a "high confidence" score (≥0.900), only 656 proteins (~16%) are seen to have ≥1 binding partner, with a maximum of 55 binding partners seen for 4 proteins. Unsurprisingly, and consistent with the comment from Maximilian Press, these proteins are all associated with the ribosome (sra, rpsP, rpsI, and rpsR). The spike in the graph below at 54 interacting partners for the high-confidence PPIs is a group of of ribosomal proteins, most of which are annotated as co-interactors. 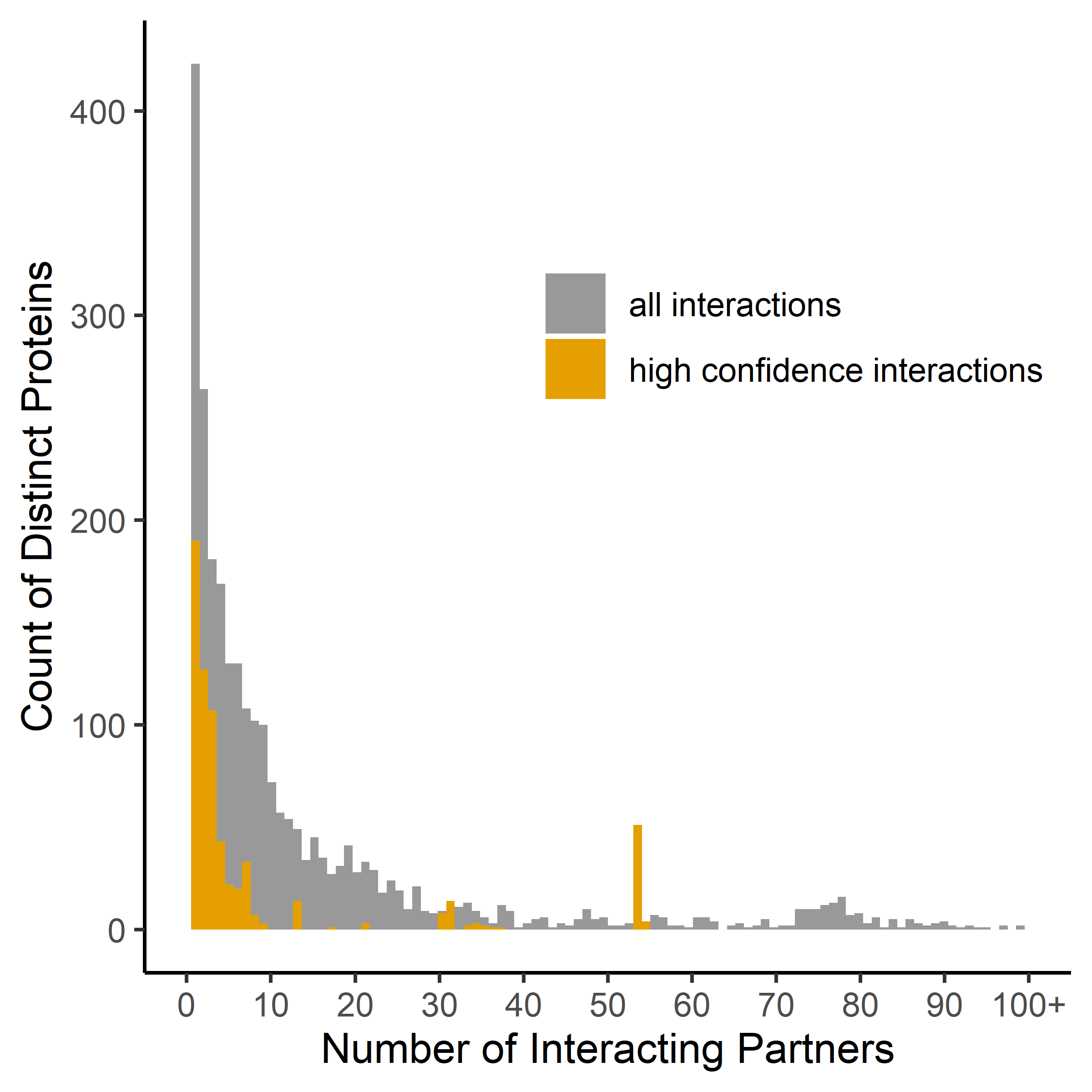 Two important notes on interpretation of interactions in this database:

Not the answer you're looking for? Browse other questions tagged proteins statistics protein-binding or ask your own question.

8
How many human proteins are very well characterized?
1
More proteins from diet when common cold and flu?
5
Which of Perutz et al's protein structures other than 3₁₀ helix were correct?
3
Are peanut proteins similar to chicken meat proteins?
0
When analysing phosphoproteins via Western blot, why is total protein level of the target protein recommended as an internal loading control?