If I put a cup over a spider, and leave it there for a day, will the spider survive?

Will it travel more slowly since it hasn't had food for a day?

What if I left the cup there for longer?

Just solely in terms of not having food (ignoring the importance of O2 that Ramkryp has pointed out), spiders don't necessarily have to feed on a daily basis anyway. It's not the same species of spider as you ask about in your question, but consider:

The metabolic and water evaporation strategies in spiders may be part of a set of physiological adaptations to tolerate low or unpredictable food availability, buffering spiders against environmental fluctuations such as those of the high mountains of the central Andes. The aim of this study is to analyze experimentally the variations in metabolic rate and the rate of evaporative water with food and/or water restriction in a high mountain mygalomorph spider population (Paraphysa sp.). We found that the low metabolism of this spider was not affected by water restriction, but its metabolism was depressed after 3 weeks of food deprivation.

from Canals M, Figueroa D, et al (2011). Effects of diet and water supply on energy intake and water loss in a mygalomorph spider in a fluctuating environment of the central Andes. J. Insect Physiol, 57(11), 1489-94.

The biochemical makeup of the spider may be radically different than most other animals, and breaking down energy stores must take place over a longer timecourse.

To answer the first part of your question: it is extremely unlikely that the spider will die or be weakened after just one day.

Wolf spiders (Lycosids) are all predators. Due to variations in prey populations, and low efficiency of consumption at higher trophic levels, they are subject to inconsistent and unpredictable food supply (Greenstone and Bennett, 1980). They are very well adapted to this lifestyle and consequently, long periods of starvation often yield no behavioural changes (Persons, 1999). It is highly unlikely that the spider will die after just one day: Anderson, (1974) observed no changes in activity after starving Lycosa lenta (a species of wolf spider) for 30 days; and Tanaka and Ito, (1982) observed Pardosa astrigera (another species of wolf spider) living for up to 54 days of starvation. Age and sex of the spider are more likely to affect its behaviour and performance than food or oxygen availability (Persons, 1999).

As for oxygen consumption, Greenstone and Bennett, (1980) measure an oxygen consumption of 100µL/hr for wolf spiders. Assuming that your cup is of the size of the unit of volume of the same name, the cup (~0.237L), a small calculation (see figure) shows that there will be enough oxygen for the spider to survive for over 98 days. The oxygen concentration within the cup may decrease as it is used by the spider, however this is likely to have a minimal effect as a cup placed on a surface is unlikely to be hermetically sealed. 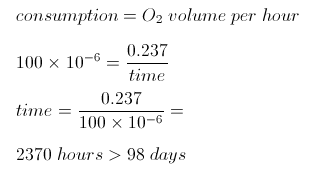 In short, oxygen availability is unlikely to have an effect on the spider before other limitations (such as food) are reached. However neither of these effects are likely to cause behavioural changes during the first month.

11
Will the "frog in boiling water not jumping out" work on warm blooded animals
4
Why do insectivorous birds migrate?
6
Why does temperature shock kill fish?
6
Do ants use something similar to the honey bee "waggle dance" to instruct the rest of the colony where to find a food source?
7
What are these shrimp-like insects in my cat's water bowl that appear overnight
1
What's the technical terminology for call-and-respond type behaviour?