What is happening at the electrode interface when the electrical field is modified due to the change of ion concentration after an AP?

I have been working for quite a while now on electrophysiology and electrode fabrication.

I studied what is happening at the neuron level during an action potential (polarization/depolarization, change in ion concentration inside/outside the cell membrane) as well as the interface electrode/electrolyte (double layer, electrical model of an electrode, etc...), but I am still struggling to tie all of those principle together. My question is, what is actually happening when an electrode is recording an AP (extracellular recording). To my knowledge, this is what is happening:

Thank you in advance

There is an art to expressing the nature of any kind of uncertainty in writing, and especially in experimental literature, to stating no more than has been empirically shown. An electrode interface only measures a one dimensional trace of what actually happens during an action potential cycle or spike, and it could be that in most of the literature, the precise mechanism by which the spike is measurable takes lower priority than the existence (or non-existence) of a particular signal.

According to Hodgkin-Huxley theory, the action potential is controlled through changes to the ionic permeability of certain membranes. The precise mechanisms by which this happens depend on the molecular structure of channels through which sodium and potassium ions flow. However, it is not hard to explain how a change in the permeability of a membrane can cause changes to an electric potential gradient (over 'large' length scales); the "deep concept" at work here is the second law of thermodynamics.

Let's suppose that you have two ions, one positive and one negative, confined to one side of a box as shown: 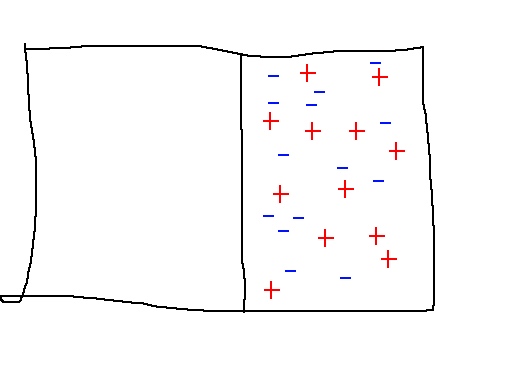 You might notice that there are more negative ions than there are positive ions, so there would be a nonzero electric potential gradient between the left and right hand sides of the container.

Now let's suppose that the confining membrane is replaced with one that allows only negative ions to pass (through the purple or tapered channels.) You might expect a fraction of the negative charge to flow over to the other side of container where the potential is slightly higher (as shown): 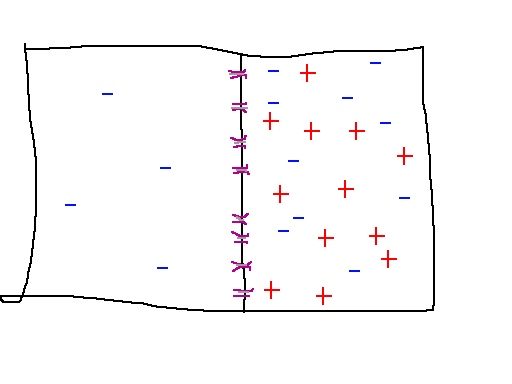 The result is that the original potential gradient (from left to right) is dampened slightly.

The OP is probably aware of this, but it turns out that replacing the membrane with one that allows positive charge to pass through results in a fraction of the total positive ions moving to the left side of the chamber (even though it would be attracted to the right hand side by the net negative charge)*. The reason for this is that the entropy gained by the first positive charge to move into the (log-macroscopically large) empty chamber vastly outweighs the (microscopic) entropy cost of leaving the occupied chamber with fewer positive ions to offset the negative ones. 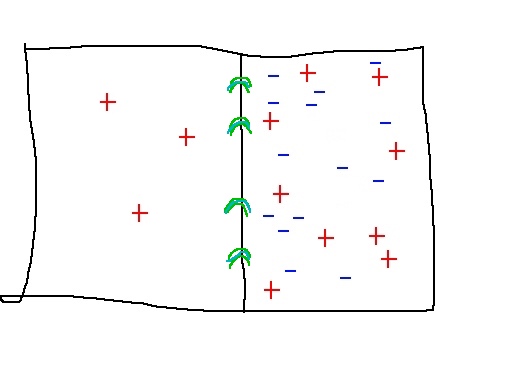 This results in a slightly larger potential gradient than in the first (impermeable) case, as there are now positive charges in the region of higher electric potential.

The electrode can pick up on changes to the potential gradient by "grounding" the circuit at several points. In particular, this requires a circuit that is soft or sensitive enough that it does not disturb the ambient potential significantly (a tape measure or height rod adapts to your height, not vice versa.) That is, whatever current flows between the electrodes should be weak enough that it does not completely drain or equilibrate whatever local potential difference might exist, and other circuit elements should be weak enough that they do not cause flooding or, in a sense, drought of the natural electrodynamic state. Beyond this, the complex and densely packed environment of neurons would make it a challenge to place electrodes to isolate a single action potential, or even a potentially useful signal across several action potentials. Also, there is inevitably a certain amount of excessive unnatural current flow below a certain length scale (the scale at which the electrode starts to look like a bulk conductor.) Because of this, neuroscientists probably care more about the presence or absence of noise at this point than about the precise physiological origin of the signal, except insofar as the disturbance from the electrode is correctable and within tolerance.

*If the experiment is performed at nonzero temperature, which seems to be unavoidable.

Not the answer you're looking for? Browse other questions tagged electrophysiology action-potential or ask your own question.

0
How is it that ionic diffusion is independent of other ions?
4
Mechanisms of extracellular stimulation of neurons
4
Are Gram negative bacteria classified as such because of their negative membrane potential?
4
Sodium concentration during action potential generation
2
Why is the resting membrane potential of excitable tissue not affected by the extracellular sodium concentration?
3
Neuronal membrane resting potential for large cells
2
Help me understand voltage patch clamping