How does species diversity vs Earth total biomass relate?

Are there any laws/theoretical foundations about how diversity of species relate with total biomass on Earth?

While there is a lot of esoteric sort of talk "humanity dis-balances the live on the Earth", I thought, there are formally seen the following hard facts (correct me if I am wrong):

So it looks like some sort of global system change (correct me if I am wrong), but how does biology science discuss them (in case my inquiry can be anyhow scientifically formulated)?

I don't work in ecology, but my first thought is that I would not expect any relationship whatsoever between diversity and biomass. Biomass simply means the combined mass of all life on the planet. If that mass consists of one extremely fat goat the size of the moon, or several trillion different organisms doesn't make a difference, mass is mass.

Now, it is undoubtedly true that loss of diversity is a huge issue. However, the way this works is usually that we replace the local ecosystem with its several, varied species with a monoculture. For example, grasses like wheat and barley are taking over the world. Destroying a forest to plant wheat might easily result in no net change in biomass or even a net positive, but it will certainly be a significant loss in the diversity of the local ecosystem.

Finally, humans are a teeny tiny part of the world's biomass, most of which consists of unicellular life, plants and insects: 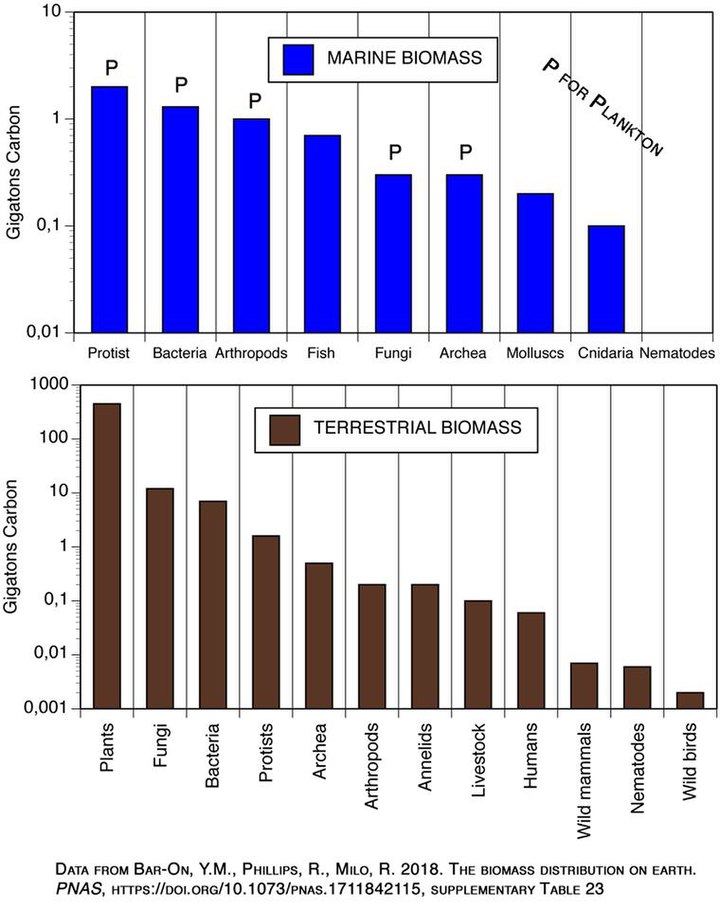 Note that the axes in the image above are logarithmic. You can get a clearer image, perhaps, from this:

See how all animals, let alone humans, are just a tiny part of the image on the right? That gives you a pretty clear indication of just how irrelevant we are in terms of global biomass. So yes, diversity is indeed decreasing, but there is no reason to think that the accumulated mass of living organisms will decrease, only the diversity of said mass will decrease.

Not the answer you're looking for? Browse other questions tagged ecology terminology literature systems-biology or ask your own question.

8
Does the entire surface of the earth contain organisms?
2
How usable is the Human Metabolic Model to predict biomass?
6
How far in can non-extremophiles live, in Earth?
3
How does ecology differ from biology?
14
Which biological kingdom comprises the greatest biomass on Earth?
29
Earth overshoot day: is it a sound concept?
2
Does gross production (P) and biomass (B) mean the same?
5
How do communities relate to food webs?
1
Measure of diversity, accounting for known species