How lungs can inhale and exhale? [closed]

I know that lungs are extended and compacted by muscles to create partial vacuum to breath in, or to create elevated pressure to breath out. But one thing seems not right to me...

As far as I know, air comes through bronchi airways (like pipes) then branch like twigs and end up in tiny berry-like alveoli where gas actually exchanged... That's all clear, but I can't connect this 2 things together. 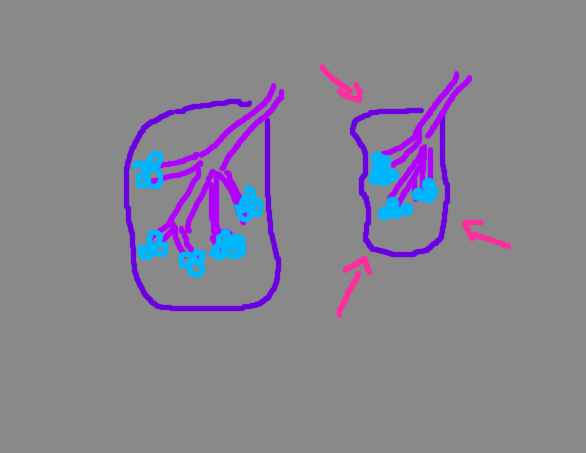 I hope this image will make it a little bit clearer... So does bronchi have some kind of openings in them to let pressure inside "bags" connect to outside world or does alveoli walls are so thin, that it actually allows gas to flow freely? What am I missing here?

(Note: Since the question language isnt clear; it just seems to me the
1. The purple-blue "Wall" (technically the plurae; containing plural space not shown) is being refered as the bag.
2. The ruptures are drawing artefacts. There arenot such ruptures.
3. I assume you know that the lumen of the broncheoles is continuous with the lumen of the alveoli ("grapes" in your analogy). I would request you to clarify the language of the question.)

The "bag" you mentioned (Purple-blue mark?) isnt like an empty bag; it can transfer the pressure to alveolar wall. Because the "bag" is filled with compact alveolar wall (imagine your "bag" (blue) as a ruber balloon and remaining lung tissue as a mass of sponge tightly filled in that baloon) and there are some tissue fluids too. so an improvised analogy would be like this: 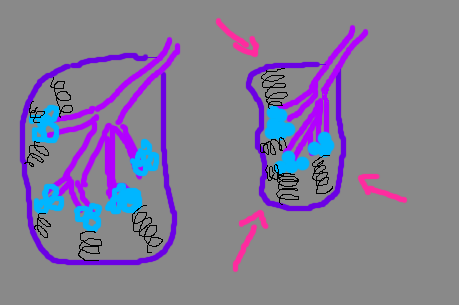 Note the springs i have drawn are not real spring. I hypothetically drawn to mean the wall is able to rtansfer the push and pull to alveoli.

The realistic histological section will help to clear some confusion I hope. 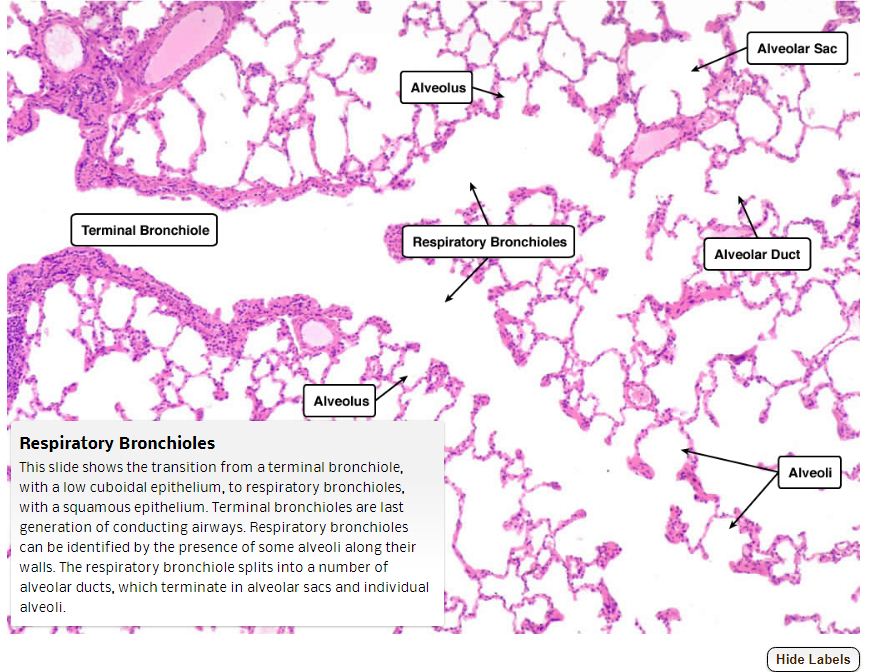 If there were rupture in bronchi or alveoli; then opposite is expected. it should leak the air to freely move to the "bag" you said, and would destroy the way to develop pressure difference and will cover up the alveoli and will crumble them (imagine the video that user @John has shared; if the red balloon is ruptured, you will be no more be able to inflate the baloon the way they are inflating.

3
How the lungs clear themselves?
2
Exhaled air and lung capacity
5
Are there land animals that use gill-like organs instead of lungs?
2
Why shouldn't there be any air between lungs and ribcage?
2
Why does water damage the lungs but amniotic fluid doesn't?