Identification of an Insect (Hemiptera)

I found a a few of these guys on my composter, so they could have easily been eating bugs or decaying organics (or both): 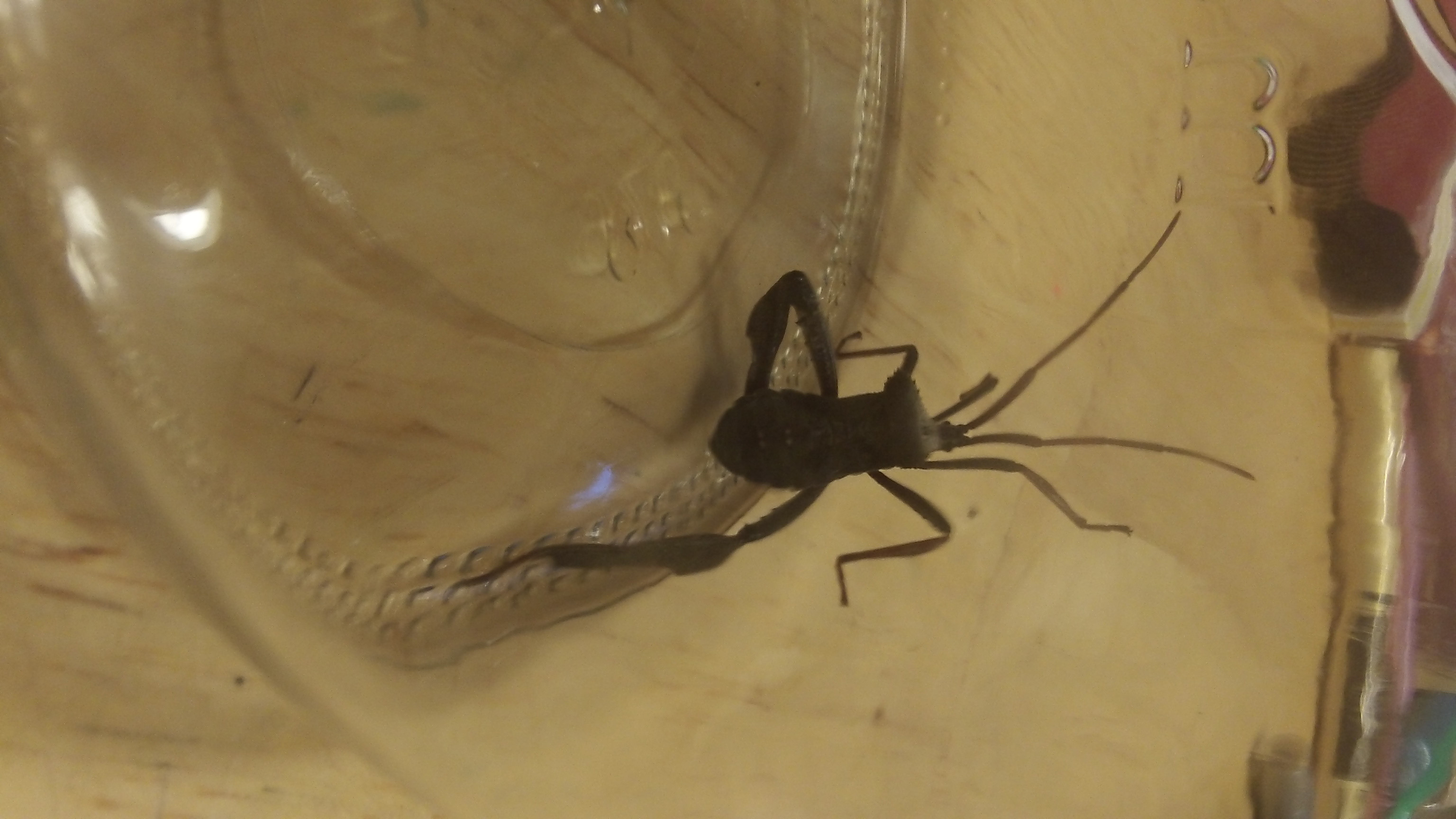 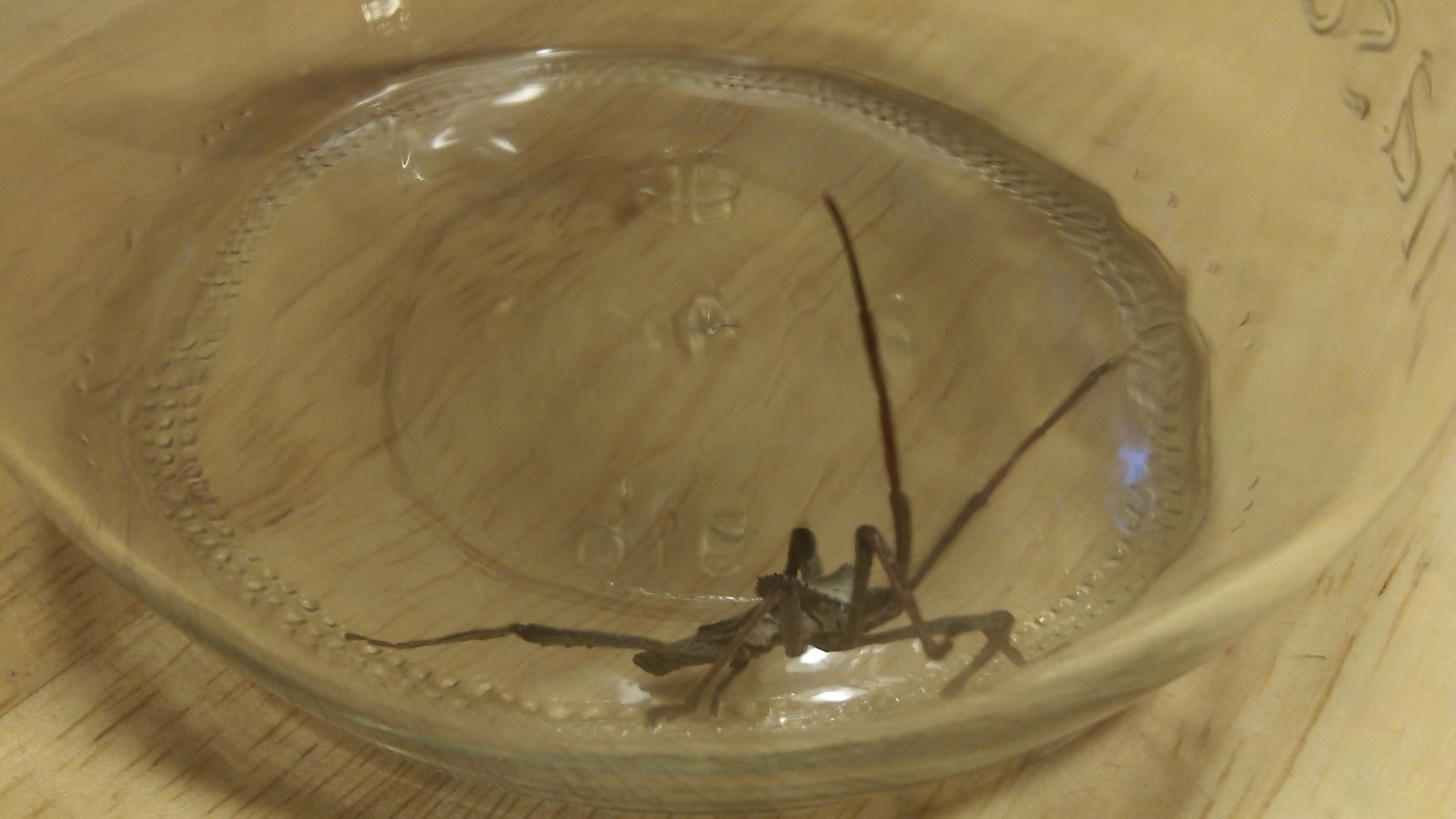 To me it looks like a stink bug with oversized legs, not like the ones I'm used to seeing. His body measures just under 3cm, and I haven't pulled on his legs to get a measurement (I haven't pulled on it at all). The legs seem to be at least 1.5 times the body length as do the antenna. The body is grayish brown and the antenna and parts of the leg seem reddish brown.

I'm a microbiologist, so things big enough to see in a jar are not really my specialty. That said, here's info that I've been trying to use ID it:

In the middle of South East US

Have had (unusually) heavy rains

Underside of the limbs and antenna seem red, but to seems gray

I've never seen it before! (and I usually notice such things).

Update: Despite my 4 year old putting other bugs and some leaves in with it, the bug died. I took the opportunity to get some much better photos, and low and behold when I started manipulating it I was able to pull out a substantial rostrum that I missed! These guys are good at hiding those. So going back to assassin bugs, can anyone id which assassin bug it is?

More photos: [I would add more but I think this should be plenty] 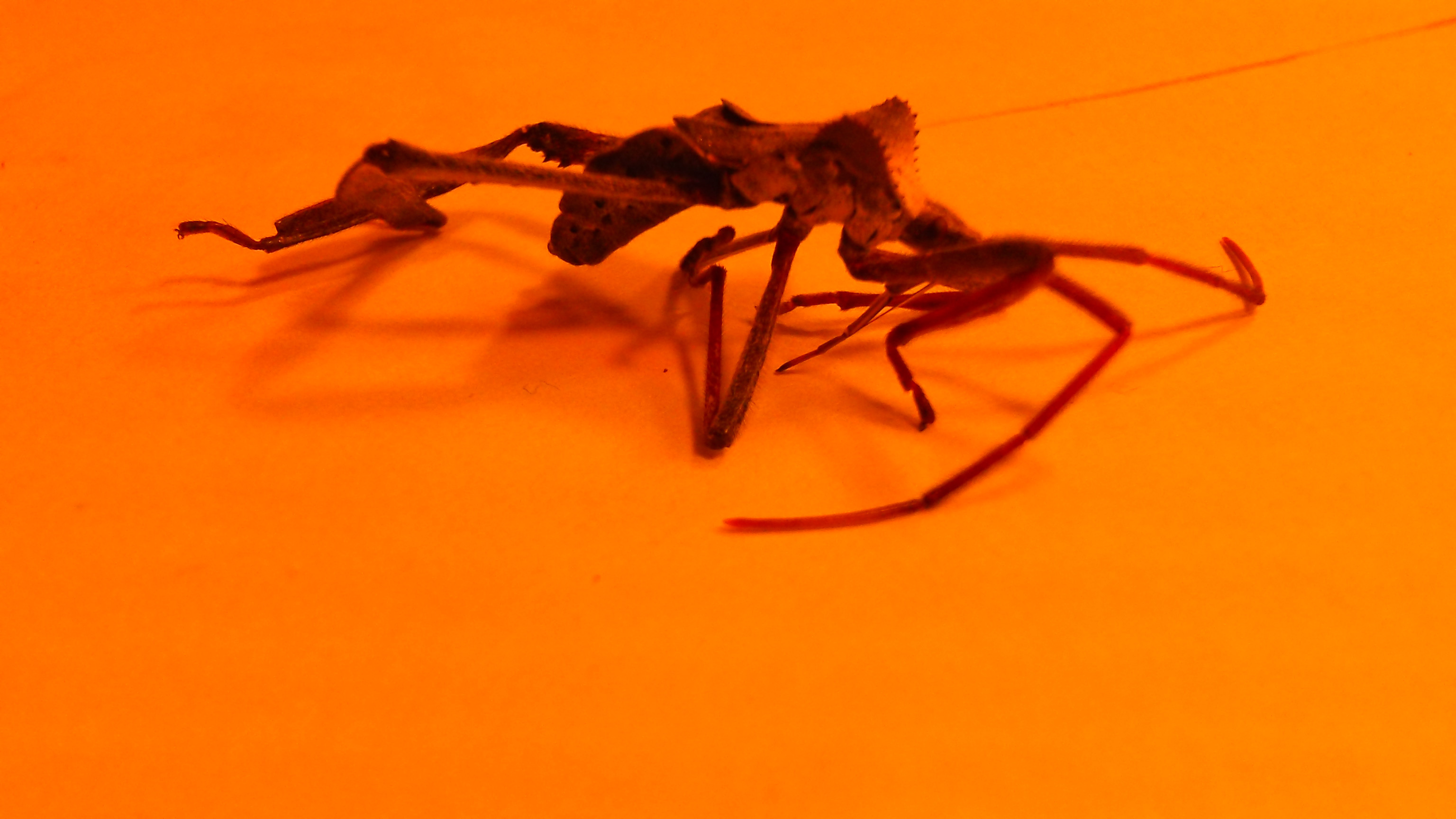 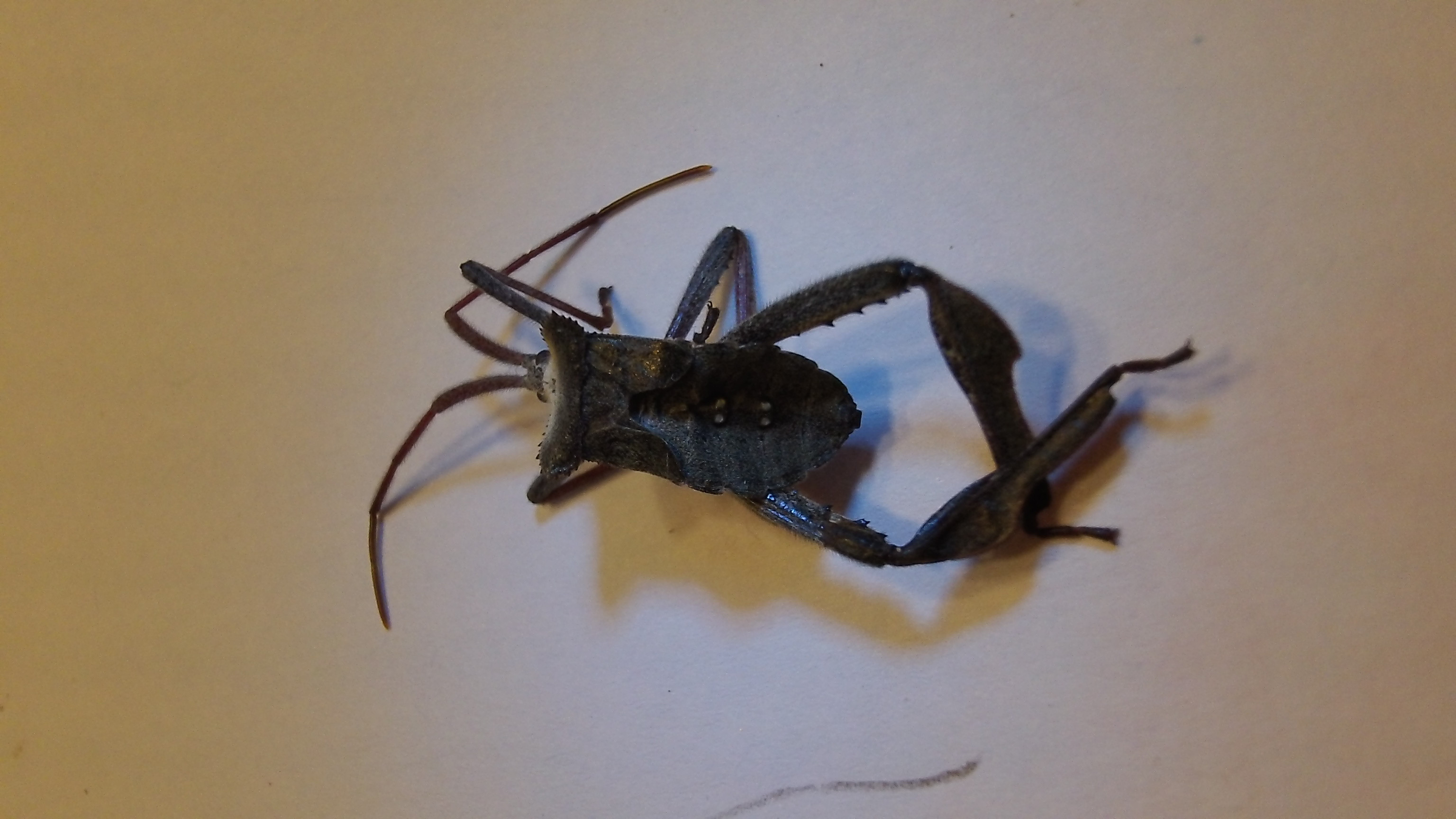 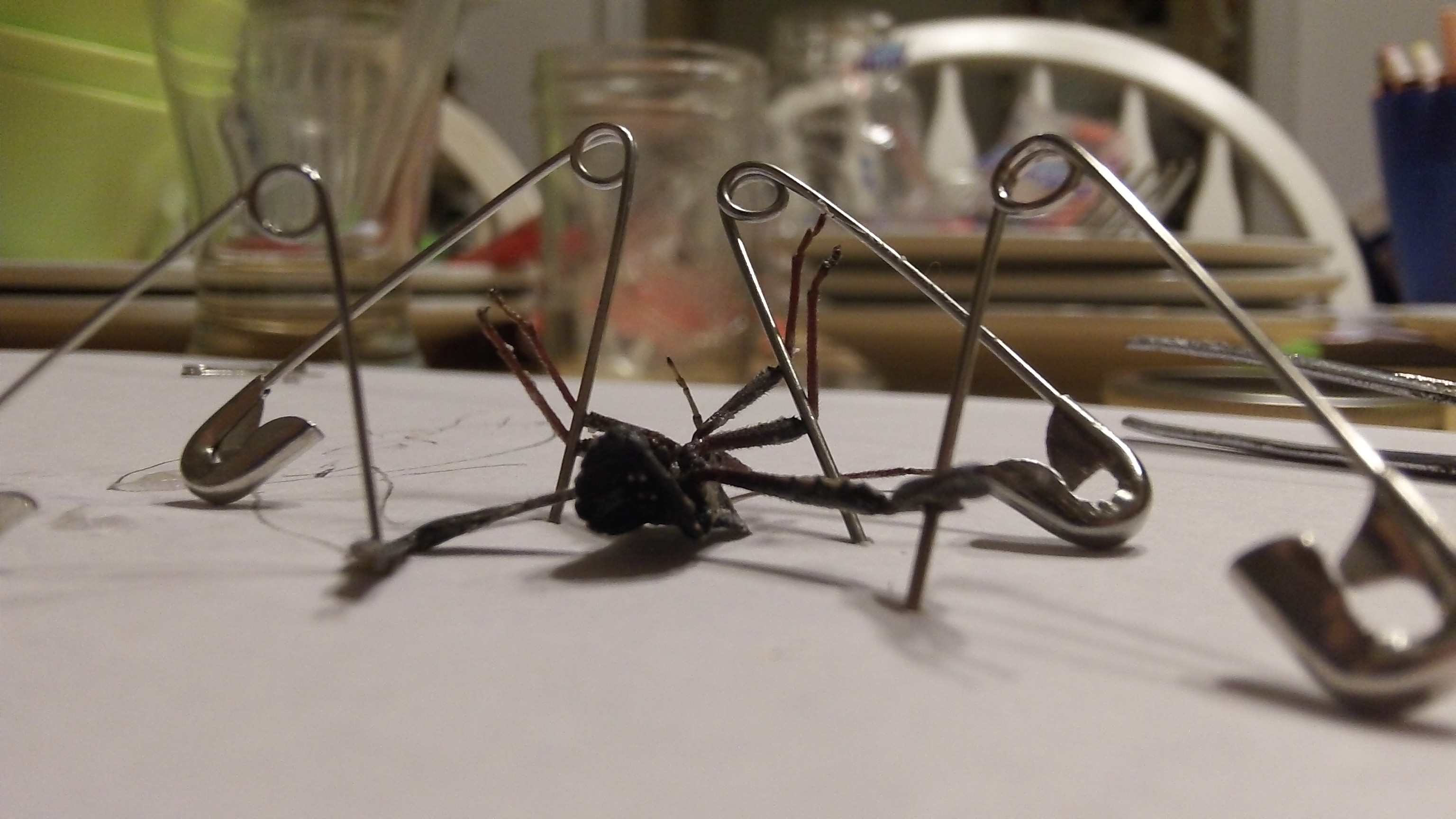 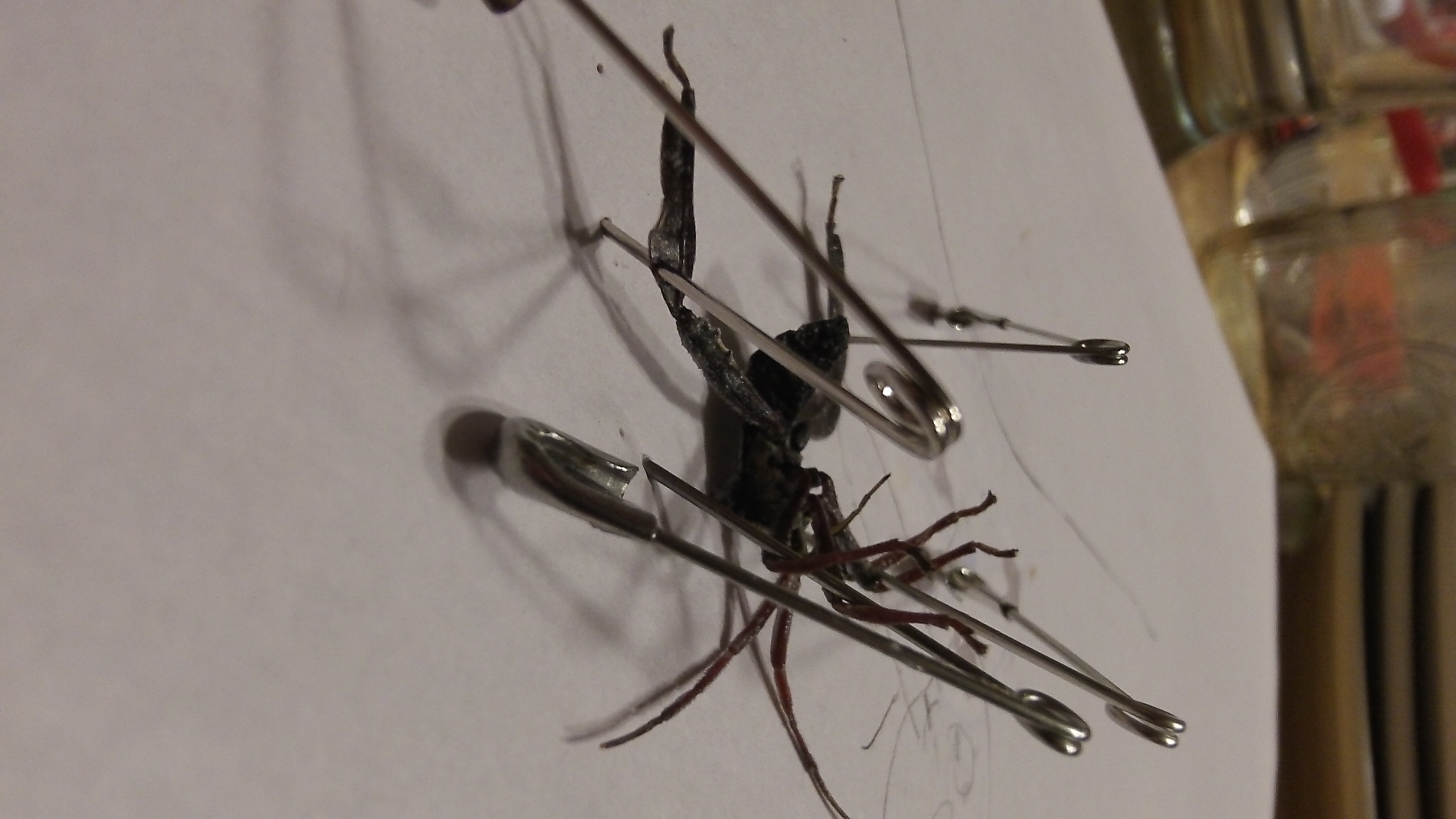 I at least think it's quite a pretty specimen (to betray my mammalian aversion to bugs).

Compare your pictures with those on bugguide of a similarly-aged individual, or the bugguide ID page. Also see the key here; which gives three characters for declivis

If you look at your pictures, you'll see that you're three for three here: the broad 'shoulders' (pronotum), the right-angle in the leg flange (dilated tibia) just above the the 'ankle', and the two rounded bumps on the pronotum (visible in photos 1 and 3).

original answer / working towards the ID

You're right on track, it definitely looks like a true bug (Hemiptera/Heteroptera). Possibly immature if it looks wingless. Maybe some kind of Assassin Bug (Reduviidae)? They don't all have burly forelimbs. You might also want to consider Coreidae, for instance the genus Leptoglossus (pdf on Leptoglossus in Georgia).

You could try this key to Florida bug families, it looks pretty user-friendly.

It looks very much like a squash bug, which look close too assassin bugs but don't eat insects, probably explaining what it was doing in your mulch. I have the same thing.

Maybe this is a late answer, but the difference between an assasing bug (Reduviidae) and a squash bug (or leaf-footed bug, Coreidae) is the structure of the beak. Reduviidae, being predaceous, have relative short, bended beaks, made of three segments and do not go beyond the first pair of legs. Coreidae, herbivores, have a long beak made of four segments. This can be see it clearly in the third and fifth picture, it is a Coreidae.

2
Identification of a mysterious lifeform, what is this?