Can an infectious diseases come from a plant?

Coronavirus, HIV, 1918 Flu, etc. They all come from animals. Do any infectious diseases (in humans) come from plants? More specifically, are there viruses that infect plants that can mutate to infect humans?

“Are there viruses that infect plants that can mutate to infect humans?”

None appear to have been reported so far. It is difficult to provide supporting evidence for an assertion that they do not exist, but a recent review on the relationship between plant and animal viromes does not include any examples, and our general understanding of the mechanisms by which viruses infect organisms and cells suggest that this is unlikely. There are, however, examples of plant viruses replicating in the insect vectors that transmit them.

In 2011 Dolja and Koonin of the NIH published a review in Current Opinion in Virology 1 322-331 entitled Common origins and host-dependent diversity of plant and animal viromes. In this they considered:

“…three distinct scenarios for the origin of related viruses of plants and animals: i) evolution from a common ancestral virus predating the divergence of plants and animals; ii) horizontal transfer of viruses, for example, through insect vectors; iii) parallel origin from related genetic elements.”

The very fact that there was a need to argue for a relationship indicates the assumed distinction between animal and plant viruses, and indeed they write:

“…plants are not known to support reproduction of dsDNA viruses and retroviruses.”

The only reference in the whole article to an actual biological relationship between animal and plant viruses is the following:

“Strikingly, viruses of the order Mononegavirales and the family Bunyaviridae… can also reproduce in their arthropod vectors.”

The paper referenced in support of this statement is by Hogenhout et al. and was published in the Annual Review of Phytophathology (2008) 46 327–359, and is entitled Insect Vector Interactions with Persistently Transmitted Viruses. From this it emerges that there is a class of plant viruses called persistent propogative viruses which replicate in the circulation of their insect vectors, in contrast to most types of circulative viruses. The insects involved include the leafhopper (illustrated below in Fig 1 from that review) and the thrip. 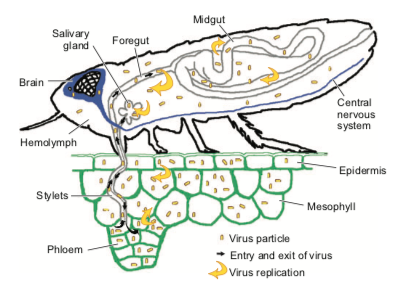 Schematic representation of persistent virus transmission by a leafhopper. Viruses that are transmitted in a circulative persistent manner do not replicate in the insect and usually enter the salivary glands from the hemolymph. In plants, replication of circulative viruses is frequently restricted to the phloem tissues. In contrast, most propagative viruses replicate in several plant tissues and in different organs of the insect vectors ( yellow arrows) and may enter the salivary glands either from the hemolymph or from other connecting tissues, e.g., the nervous system or trachea.

It is not clear to me whether the virus is in any way detremental to the insect vector — certainly it is not the primary target of the virus, and replication can be regarded as allowing it to survive longer before the insect transmits it to the plant.

The very fact that persistent propogative insect viruses can replicate in their animal vectors raises the question whether the insects could somehow transmit them to human beings. In an answer to a different question on whether insect pathogens can infect humans I have argued that the absence of examples in situations where people come into close contact with insects and the difference in anatomy and molecular structure of cell membranes makes this unlikely. In the present case we are not even talking about an insect pathogen, but a plant pathogen.

This is a great biological question! I'm glad we encourage such questions from curious people who want to learn more about modern biology.

You may occasionally read news stories of disease-causing strains of Escherichia coli which contaminate vegetables and force product recalls. There is currently a CDC advisory to not eat clover sprouts, as an example, because of contamination with E. coli O103, a strain which can cause a variety of health problems (including kidney damage, in severe cases).

This kind of contamination is becoming more common, largely as a consequence of how we produce food:

Fresh fruits and vegetables once were thought to be relatively free of disease-producing pathogens. In recent years, however, outbreaks of foodborne illness linked to fruits and vegetables have become more common. These outbreaks come from produce grown both in the United States and in other countries. Outbreaks have been linked to Escherichia coli O157:H7 and Salmonella on apples, lettuce, cantaloupe and sprouts; Listeria monocytogenes on cabbage and cantaloupe; Shigella on parsley and lettuce; and Cyclospora on imported raspberries.

Changes in microorganisms have undoubtedly contributed to this increase, as have changes in growing, harvesting, distribution, processing and consumption practices. Listeria monocytogenes, Clostridium botulinum and Bacillus cereus are naturally present in some soils. Their presence on fresh produce is not uncommon. Salmonella, E. coli O157:H7, Campylobacter jejuni, Vibrio cholerae, parasites and viruses can contaminate produce through raw or improperly composted manure, irrigation water containing untreated sewage or manure, and contaminated wash water. Contact with mammals, reptiles, fowl, insects and unpasteurized animal products are other sources of contamination.

Wash your fruits and veggies!

Not the answer you're looking for? Browse other questions tagged infectious-diseases or ask your own question.

2
How do plants prevent infection from retroviruses?
2
Is there any disease in common between human and insects?

9
Risks of latent viruses that reside in ancient genomes under research?
5
Are there any documented instances of coronaviruses being directly transmitted from bats to humans?
0
Why are diseases generally specific to a particular species