Why is glycerol the backbone of fat?

Fats are fatty acids joined onto the backbone of a glyercol (propane-1,2,3-triol).

Why was glycerol seemingly chosen by nature to be the backbone of fats? Why can't it have been a butane -1,2,3,4- tetraol or pentane with 5 alcohol groups or almost any other molecule?

So my question boils down to, is it just pure chance that glycerol is the backbone of fats or is there a deeper underlying reason?

Chance should always be high on our list of explanations of why the history of life turned out in some specific way. As James A. Coffman has described, there are a couple of different notions of chance. Evolutionary biochemistry is quite difficult because today's diversity of biochemical genotypes and phenotypes are a biased representation of the ancient past.

However, I think a case can be made that it was not 'pure' chance.

As your question itself suggests, the chemistry requires alcohols for the esterification with fatty acids to form acyl glycerols. I think that is 'sufficient' to say it is not 'pure' chance that among molecules that it was glycerol, but since you're also questioning "why glycerol?" over other alcohols, let's look at what glycerol has going for it compared to other alcohols.

Hopefully that convinces you that glycerol was not completely random with respect to all other molecules or even all other alcohols. That is, not all the possibilities in those sets are equally good for the biochemical role that we now see glycerol fulfilling, and glycerol is defintely not the worst. However, there may have been other subsets of alcohols/molecules in existence at that time for which we don't have specific reasons for glycerol being better.

In conclusion, no, not 'purely' random.

Reading my answer above, I can see why someone reading my list of glycerol traits may think I am making a just so story on why it is specifically glycerol that we have today fulfilling a biochemical role of joining together fatty acids via acylation. To be clear, I am not addressing 'why' glycerol is the molecule fulfilling this role but rather whether it is purely random that glycerol is the molecule fulfilling this role. In my vernacular, 'purely random' implies a uniform probability distribution, which is to say that in this context each molecule was as likely as any other to fulfill the role that we see glycerol fulfilling in biochemical systems today. By citing reasons why some molecules are better suited in their properties, we show that the distribution cannot be uniform. We don't need to even place where glycerol sits on this distribution to determine that it is not purely random. We only need non-uniformity. The fact that glycerol has traits that make it more likely than others is an additional suggestion that among the molecules under consideration, glycerol was not the least likely.

Summary
To attempt to explain why organisms evolved with a particular molecule performing a particular function it is not sufficient to consider the suitability of the molecule for that function and to compare it in abstract with other possible molecules. It is also necessary to consider the metabolism in existence at the time the function arose, and hence the molecules available as precursors. It is argued that membrane phospholipids, which use the same precursor (phosphatidate) as triglycerides, arose early in evolution, so that the ‘choice’ of phospholipid backbone probably determined that of triglyceride. One ancient pathway that is known to have existed at the time of the emergence of membrane phospholipids is anaerobic glycolysis, which includes only hexoses and trioses. It is argued that a three-carbon compound could provide a simple backbone that a six-carbon ring could not, and emphasized that the glycerol phosphate precursor is formed in a single step from the dihydroxyacetone phosphate intermediate of glycolysis. The separate evolution of a glycerol-phosphate backbone for membrane phospholipids on two occasions in the form of the different stereo-isomers glycerol-3 phosphate and glycerol-1 phosphate in bacteria and archaea is consistent with the view that the availability of a glycolytic intermediate influenced the “choice by Nature” of the backbone of phospholipids and triglyceride fats.

Molecular Evolution: Problems and Pitfalls
Before addressing this question I would once again emphasize some of the difficulties with questions on molecular evolution, often seen on posts to this site.
One type of question asks why something that the poster believes would be advantageous has not evolved. As I have discussed in an answer to a question of this sort, the poster often only thinks of this in abstract, rather in terms of the actual selective pressures that drive evolution.
The second and more frequent type, typified by this question, asks “Why did such and such evolve in this way?”. The common pitfall here is to assume that because it evolution did produce this result, the molecule in question must be the best suited to this function, and hence answers tend to list the way the structure of the molecule allows it to fulfil that function. The answers tend, in fact, to be to a different question “Why is this molecule suited to this biological function?” — a perfectly good question, but one of structural chemistry rather than evolutionary biology.
To even approach an answer such questions I think one needs also to consider the evolution of metabolism, and hope Nature may have left some clues to help. I shall adopt this approach to the present question. Another example related to nucleic acid bases can be found here.

Glycolysis as the source of precursors to the backbone
My premise is that the glycerol backbone of triglycerides arose early in evolution because it was first used for the membrane phospholipids. As shown in the schema below (adapted from Berg et al.), both fatty acids and triglycerides are formed from a common precursor, phosphatidate, a monoglyceride built upon L-glycerol 3-phosphate (G3P). (In addition, the conversion to triacylglycerol utilizes the same type of acyl-CoA derivatives used in the formation of phosphatidate.) 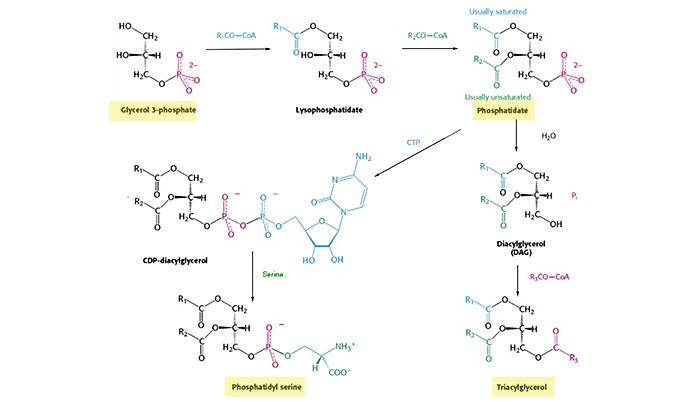 Even if one does not accept that argument that what holds for phospholipids holds for triglycerides, the evolution of the glycerol backbone of phospholipids illustrates the general approach that I think should be employed.
The synthesis of the phospholipid backbone requires an abundant source of a carbohydrate precursor. Clearly membrane phospholipids evolved at early stage and before oxidative metabolism that uses membranes for the chemiosmotic synthesis of ATP. Comparison of pathways in many different bacteria and archaea suggests that the enzymes for glycolysis and gluconeogenesis (which latter may have arisen first) were present in the last universal common ancestor (LUCA), so it is not unreasonable to look there for the precursor.

Examination of my schematic of glycolysis, above, reveals that the pathway includes only hexoses and trioses. These, therefore, represent the initial choice of precursors to the backbone. The particular hexose rings contain hydroxyl groups (to which a fatty acid might be attached) with different orientations, making them unsuitable for a membrane component without further metabolism. The triose, dihydroxyacetone phosphate (DHAP), can be converted to G3P in a single step, and this provides a suitable backbone for phospholipids and triglycerides. (Of course hexoses are used for carbohydrate storage, but as polymers such as glycogen and amylose.)
Perhaps, in theory, there is a better backbone than a triose, but as trioses ‘work’ (as explained in the answer from @Galen), once membranes had developed it would require a very strong selective pressure for a change to occur even if metabolism had expanded and other precursors had become available. That is my postulate.

The ether phospholipids are thought to be more suitable for extreme environments, but their existence raises difficult evolutionary questions regarding the relative time of appearance of the two types and how eukaryote membranes could have evolved from an archaeal cell, as is thought by many. These are discussed in several reviews listed in the bibliography, but what is more relevant to this question is the fact that the backbone differs stereochemically between the two. In the bacterial (and eukaryotic) case it is D-glycerol, derived from sn-glycerol 3-phospate, whereas in the archaeal case it is L-glycerol, derived from sn-glycerol 1-phospate. However in both cases these are derived from dihydroxyacetone phosphate in a single step, as shown in this diagram from Pereto ́ et al.:

There are two conclusions to be drawn from this. The first is that the phospholipid backbone arose on two different occasions, but in both cases from the same glycolytic/glucogenic precursor — it was not chance. However “chance” would seem to have played a part in the stereochemical conformation of the backbone glycerol, which has no influence on the structural properties of the molecule.

Not the answer you're looking for? Browse other questions tagged molecular-evolution fat-metabolism lipids or ask your own question.

13
Why is uracil, rather than thymine, used in RNA?
10
Why do organisms excrete nitrogenous wastes?
4
Why is fructolysis independent of glycolysis?

3
Why is brown fat brown?
2
Are fatty acids and glycerol lipids?
9
If eating 100% fat 2 times more worth the energy I spend during the day, will I store body fat?
5
Why is glycerol kinase absent from adipocytes but present in the liver?
3
After fat is burned from one part of the body, is fat moved around the body?
11
What animal has fat with the highest energy density?
1
How much fat can the body absorb? Implications for daily fat distribution
0
How much energy is used to construct a pound of fat tissue?