Identification of this humpbacked, brown, clawed insect climbing up my wall?

I noticed several of these guys outside, all in a vertical position clinging to a wall. I didn't come to them too closely, but my immediate reaction was that they are scorpions. 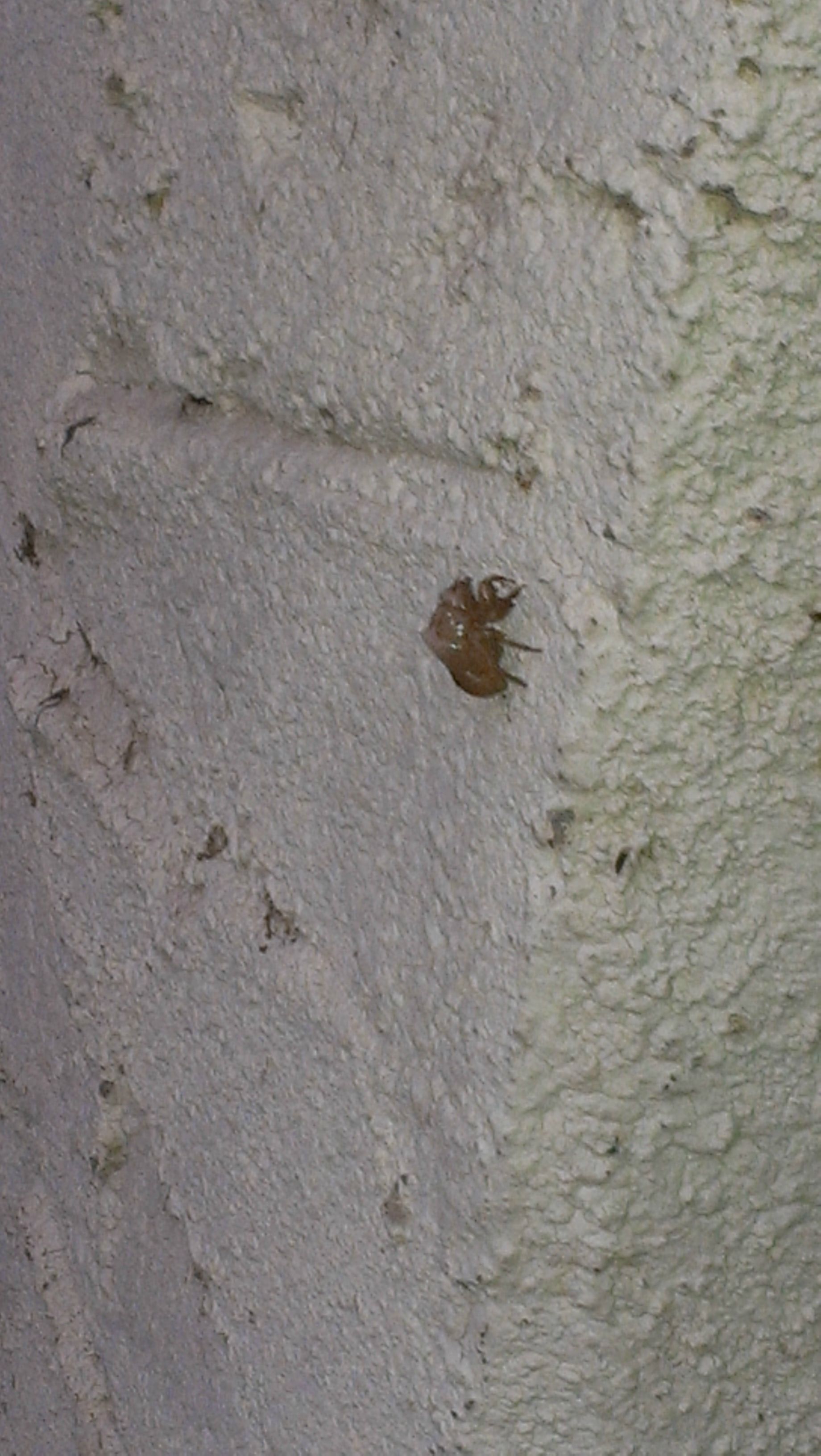 I thought that maybe it's a curled-up scorpion, or maybe there's some kind of particular scorpion that is this circular in shape? These are probably silly conclusions, but I'm not an expert in this field. I would really appreciate the insight of a professional!

species-identification zoology entomology
Share
Improve this question
edited May 14 '21 at 4:53

That's the exoskeleton (shed outer shell) of a young cicada, left behind when it emerged as an adult and (we can imagine) flew off somewhere to sing, and find a mate.

This article on EarthSky has a nice description of the big cicada hatch this summer (2013), and also a great picture of an adult cicada emerging from the exoskeleton. However, this article and other recent news about cicadas mostly deals with the Eastern US genus Magicicada, and it's likely that in Arizona you're seeing a different genus (that is, a different type of cicada).

You'd probably have to find an adult in order to identify exactly what genus and species of cicada you've got. Alternatively, you could listen for their songs – this site has examples of calls from many Western US species, including the Apache Cicada Diceroprocta apache, which seems to be a common cicada in your area.

I Wanted to add a more thorough answer to this post (with some pictures) since they are bound to get a lot of press (and questions) this summer (2021) -- more on that later....

This is the abandoned exoskeleton (called an "exuviae") of a molted cicada nymph. 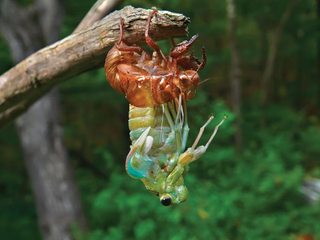 Here is a time-lapse of one molting:

Cicadas are a superfamily of insects of the true bug (Hemiptera) order; most species are in the family Cicadidae.

Cicadas actually live most of their lives underground as immature nymphs. They feed by sucking out xylem from plant roots. Their enlarged claw-like forelimbs are used for digging in the soil in which they live and for excavating chambers near food sources [source]. After 2-17 years (see below) underground, the nymphs emerge, crawl up a vertical structure, and molt for the 5th time into their final adult stage. Their exuviae are often left clinging to the plant (or wall) after molting due to the relatively sharp tarsal claws they use for anchoring and climbing. Adults often live for multiple weeks: sucking on xylem from aboveground plant structures, mating, and depositing eggs in branches. After eggs hatch, nymphs drop to the soil below, and begin their multi-year subterranean life. 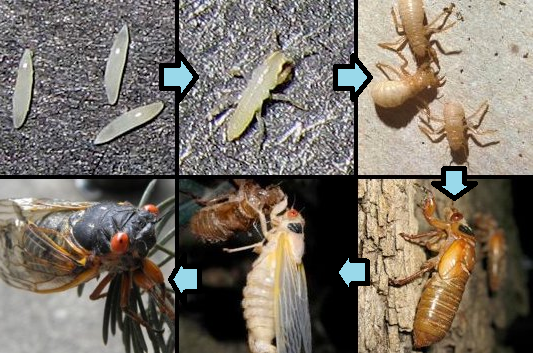 In North America, there is a need to distinguish between "annual" and "periodic" species of cicadas. Annual cicada species can be found essentially every single summer (although their life cycle is 2-5 years, there are enough overlapping broods that one can see them annually).

Periodic cicadas (genus Magicada), on the other hand, spend most of their lives living underground and synchronously arise only every 13 or 17 years depending on species and brood (13-year species more common in SE US and 17-year species more common in NE and midwestern US). They survive by sucking on xylem from deciduous tree roots.2. These periodic cicadas are unique to the Eastern US, and such long life cycles aren't found in insects anywhere else in the world.

These two subgroups of cicadas are easy to tell apart as a number of species of annual cicadas tend to be larger and green-hued whereas the periodic species are smaller, black-bodied, and have very conspicuous red eyes and tinted wings. Even the few darker annual species (e.g., Diceroprocta apache and various Okanagana species) lack the bright red eyes and red/orange-tinted wings seen in the periodic species. 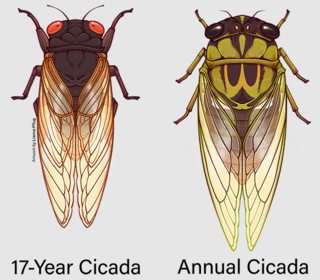 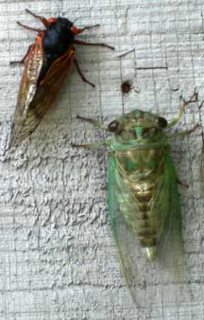 The swarm is coming back!!

Periodic cicadas have the longest life-cycles of any insect, and their almost magical synchronous emergence every 13 or 17 years always captures the attention of many media sources and social circles/media. However, some of you may wonder: "wait, has it really been 17 years since we last saw these insects?..."

Well, the answer could be yes if you live in the right place, haven't moved, and haven't turned on your TV/computer lately. However, in certain areas, it's possible to see these insects more frequently! You see, there are actually multiple broods of these insects -- essentially separate populations -- that arise at different times. 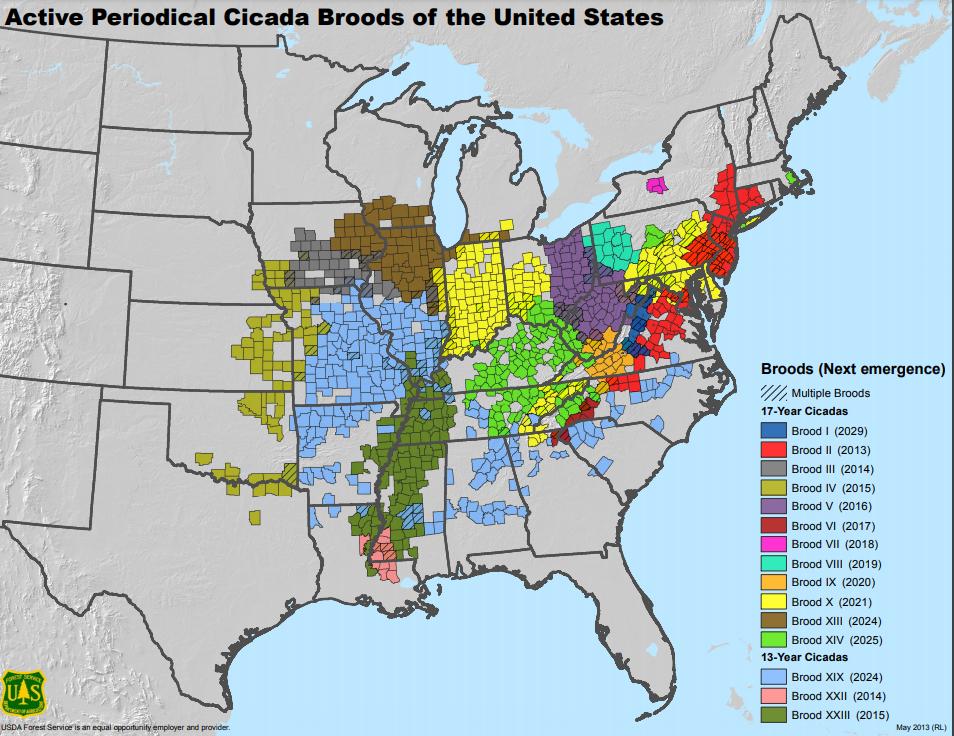 As you can see, Brood X can be found in 10-11 states ranging from New Jersey to Illinois.

You can read more about periodic cicada broods on Wikipedia, and you can see range maps of both 13- and 17-year species here (from here).