How do we formulate the mutational load for "junk DNA"?

Based on Joe Felsenstein's textbook, I was trying to formulate the mutational load for the majority of eukaryotic genomes that are junk DNA ($L_{most\_of\_genome}$). (See background section for more details and relevant quotes.)

Extrapolating from what Joe writes about non-junk loci and removing one simplifying assumption (Muller-Haldane), I believe that this should be equal to the allele frequency of each locus (simplifying here to the average across these loci, $q_e$) multiplied by whatever infinitesimal selection coefficient each locus has ($s$, on average), summed across all loci ($N_{positions}$):

(Ideally we would sum this across individual estimates of $q_e$ and $s$ for each locus, but that's obviously impractical here so we use the mean across loci.)

here are some closely related questions:

1) Is the above a reasonable formulation for $L_{most\_of\_genome}$? If not, what would be? (I can readily imagine that a lot of assumptions start breaking with hundreds of millions of positions etc.)

2) If it is a reasonable formulation, what are "reasonable" parameter ranges for $s$ and $q_{e}$ of "deleterious" nearly-neutral mutants for this majority of the genome? (For example, we might say that $s$ can take values less than the inverse of the population size.)

Possible problems with this

This is a subset of the overall mutational load. For these parameter values that seems plausible, but if we take seriously Joe's argument (see below) that many of these loci will fix deleterious variants, e.g. $q_e \approxeq 1.0$, then this value could get quite high.

For example, here's a different calculation assuming that $q_e \approxeq 0.1$:

In fact, asymptotically we expect that every locus will fix slightly deleterious variants. In this case of universally fixed slightly deleterious variants, this load is closer to $10^{-1}$ for the above example. For conifers and axolotls with >10Gbp genomes, we would then expect the load just from junk DNA to be greater than 1 for these parameter values, e.g. dead. Joe has a section "Why aren't we all dead?" but it doesn't directly address this, and it uses principally verbal arguments.

I am refreshing my knowledge of the mutational load by reading the section of Joe Felsenstein's book on the subject (pp. 152-158), and I am now remembering something I struggled with while taking the class he taught on the subject.

Joe writes in the section "Weak selection and mutational load":

As the mutational load is said to be a function of the mutation rate, but not the selection coefficient, it is natural to wonder how a very weak selection could impose a load. Surely the Haldane-Muller principle cannot hold all the way to $s = 0$. Of course, it does not. In the haploid case, the mutational equilibrium gene frequency $q_{e} = \frac{u}{s}$ is only correct if $u < s$, otherwise the only equilibrium of the system (III-21) is $q_{e} = 1$. If $u \geq s$, so that $q_{e} = 1$, the load is $L = q_{e}s = s$, so that as we consider cases with progressively smaller values of $s$, the load will remain $u$ until $s = u$, then below that point the load will smoothly decline to zero as s declines.

Joe then talks about some other stuff and concludes:

The load will be a simple function of $u$ unless $s$ is so small that it is not substantially greater than $u$. Below that point the load will decline to zero as $s$ does.

This last sentence (my emphasis) is not obvious to me based on what I've read.

I am having trouble following this logic. Here is what I understand of it:

1) Muller-Haldane asserts that $s$ has very little impact on $L$, such that to a close approximation $L \approxeq u$ (for a haploid; shown on p.153 and elsewhere), in other words the load is mostly unrelated to $s$ because $s$ only has an effect if $q_{e}$ is not close to zero, which is rarely true for new mutants.

2) At very low $s$ there is a higher chance that the mutant will go to fixation (e.g. reach the $q_{e} = 1$ equilibrium) due to the lesser action of selection.

5) Joe also uses the C value paradox/junk DNA/onion principle to argue that the mutational load isn't affected by most of the genome for large genomes e.g. human. But that argument seems to say that we just shouldn't worry about these regions of the genome because their selection coefficients are in the region of negligibility close to zero.

But these are not formally worked out here in the book. Can anyone formulate an expression or approximation for exactly how we can treat the load associated with very small selection coefficients that are found in most of a large eukaryotic genome?

I ended up writing directly to Joe after not getting an outside answer here. I won't directly quote him without his permission, but to sum up, he wrote the following: 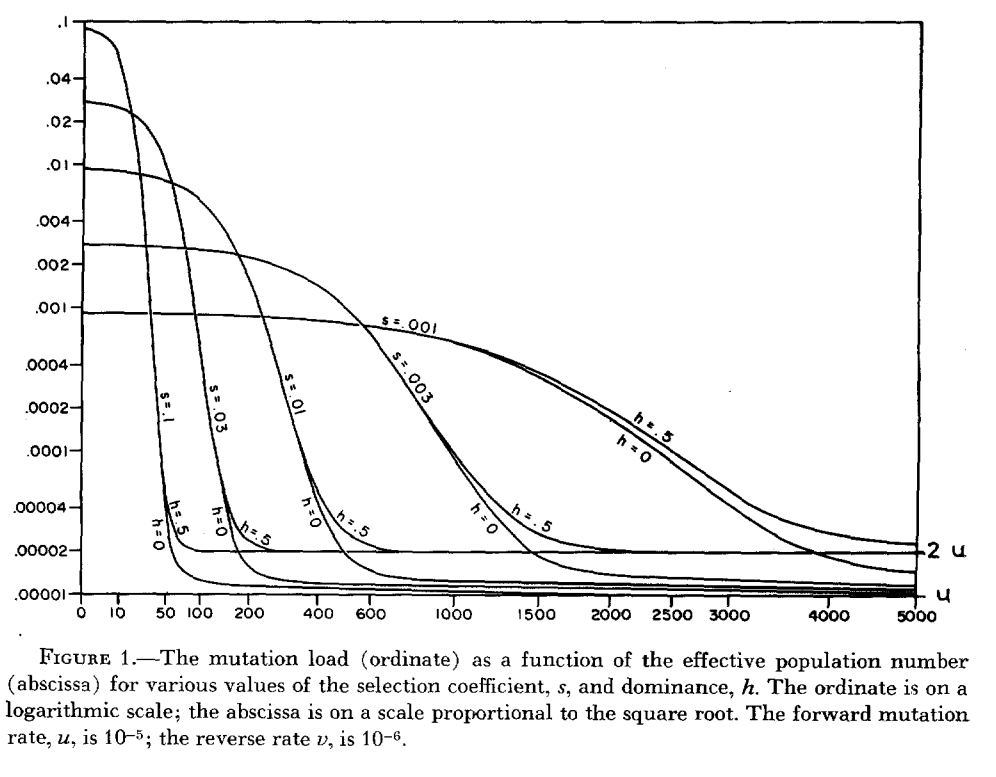 Not the answer you're looking for? Browse other questions tagged population-genetics theoretical-biology molecular-evolution or ask your own question.

-2
Could a mutation on neutral part of genome become deleterious?

2
Lineage selection in plasmid evolution
6
How much DNA of mitochondrial origin is incorporated in main cell's DNA?
3
Defining dominance and selection in these formulae
7
Within and Between Allelic Class Diversity
1
The total numbers of mutations on different branches of gene tree are independent or not?
2
What are the considerations for studying population genetics of bacterial pan-genomes?