My professor's lecture notes say that " The basal rate of firing is called “sympathetic tone” and 'parasympathetic tone" , but a table I found on the internet says that the parasympthetic system has no tonic activity.

Does saying the ANS has tonic activity mean that it sends impulses continuously and at a low rate to effectors? How is the ANS considered rapid then?

On Euroform Healthcare It is written that without the sympathetic and parasympathetic tones, we would not be able to regulate the activity of organs or bring it up and down, I don't understand why that's the case ?

I'm very new to this whole topic (ANS) so please go lightly on me.

Background
Nice question! I think part of the confusion stems from terminology. Let's start with some definitions first.

[P]hasic neurons in guinea pig bronchial parasympathetic ganglia respond to a prolonged suprathreshold stimulation with a high‐frequency burst of action potentials ..., whereas tonic neurons are nonaccommodating and will respond with relatively lower frequency action potentials... 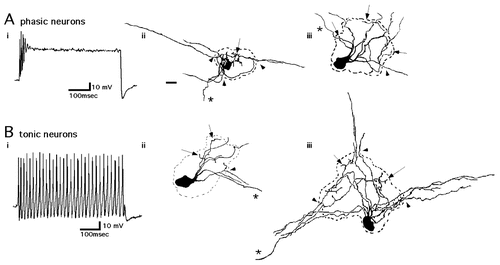 Not the answer you're looking for? Browse other questions tagged neuroscience physiology neurophysiology autonomic-nervous-system or ask your own question.