Can single-cell organisms have through-holes? (Are donut-cells a thing?)

I've watched a YouTube video about microorganisms, which featured a shot (below) of a single-cell organism, that looked like it had several through-holes in its body. Somehow I have a pretty steady mental image of a single-cell organisms being basically blobs: a sphere, an ellipse, a branching tree-like structure, all seem like plausible single-cell creature shapes to me, but something like a donut just doesn't. Is my intuition wrong and this is just a normal thing cells do? If so, how do those holes form? And if not, why does this shot look like a cell with holes?

I thought that those holes might be just me wrongly interpreting the image. One idea was that this might be a result of the cell's complex 3D structure being projected on a 2D screen, but the movement of particles inside of the cell (which you can see in the video) seems to support the "cell with holes" interpretation. The other one, that was suggested in YouTube comments, is that those "holes" might be vacuoles inside of the cell. It seems that for that to be true, the image would have to be more like an MRI scan, revealing only a "slice" of the cell. But you can see some of 3D structure there, so it doesn't seem right either. 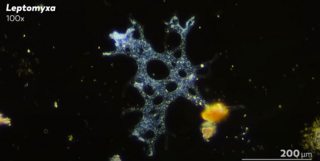 L[eptomyxa] reticulata is an edaphic protozoan and a predator of bacteria and amoebae. [...] The plasmodium is very polymorphic; its size varies between 50 .mu.m and 1 cm. It generally spreads in the form of a very thin transparent protoplasmic layer. It may have the shape of a full blade, sometimes perforated with holes, or of a network; the pseudopodial zones with active locomotion present a typical fan-shaped contour. 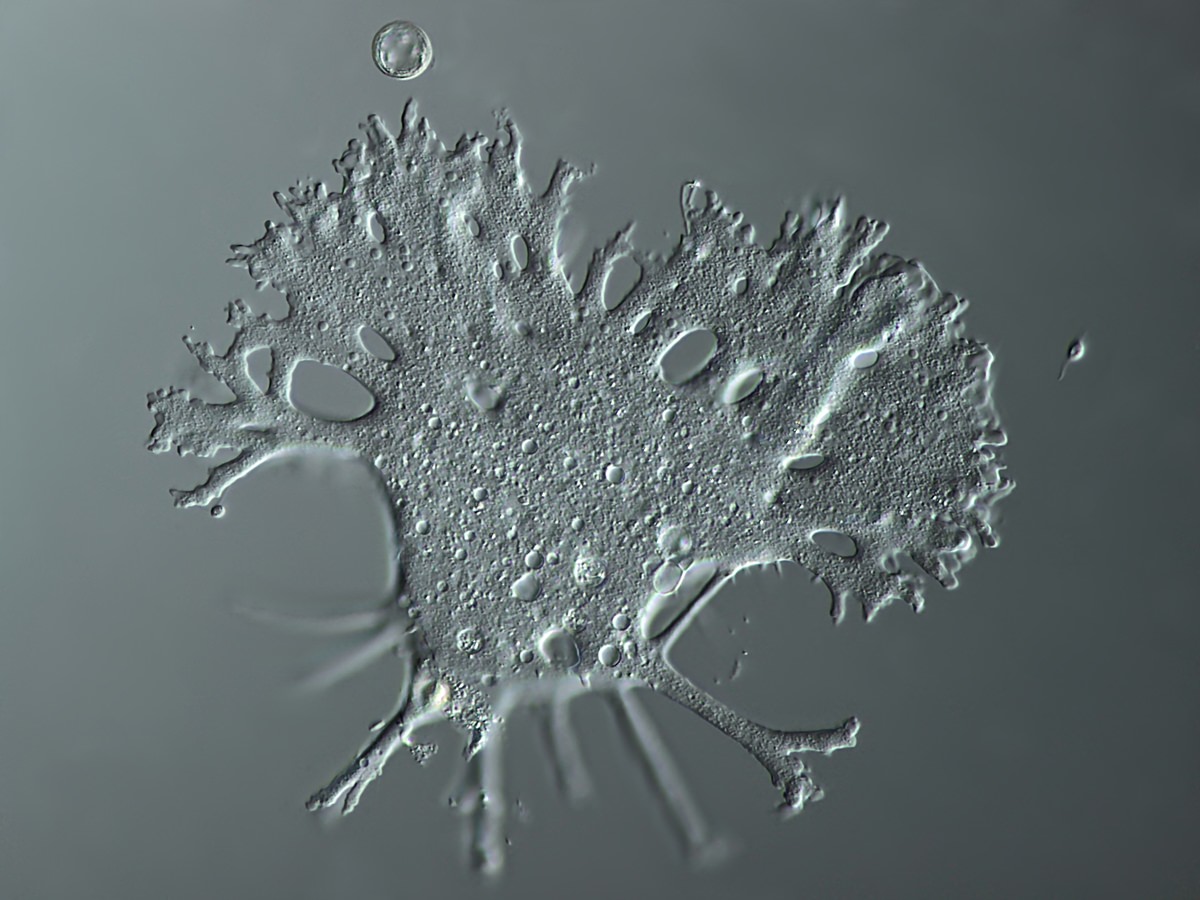 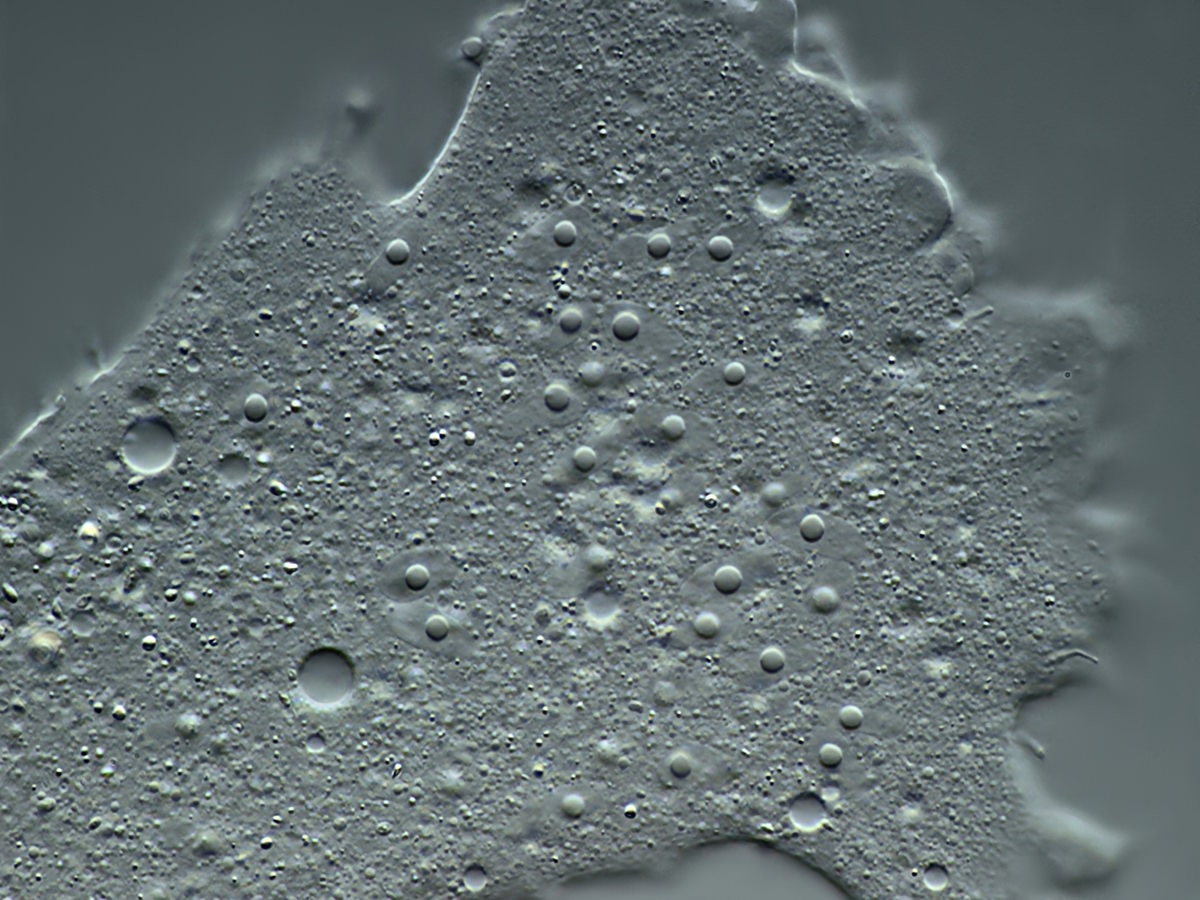 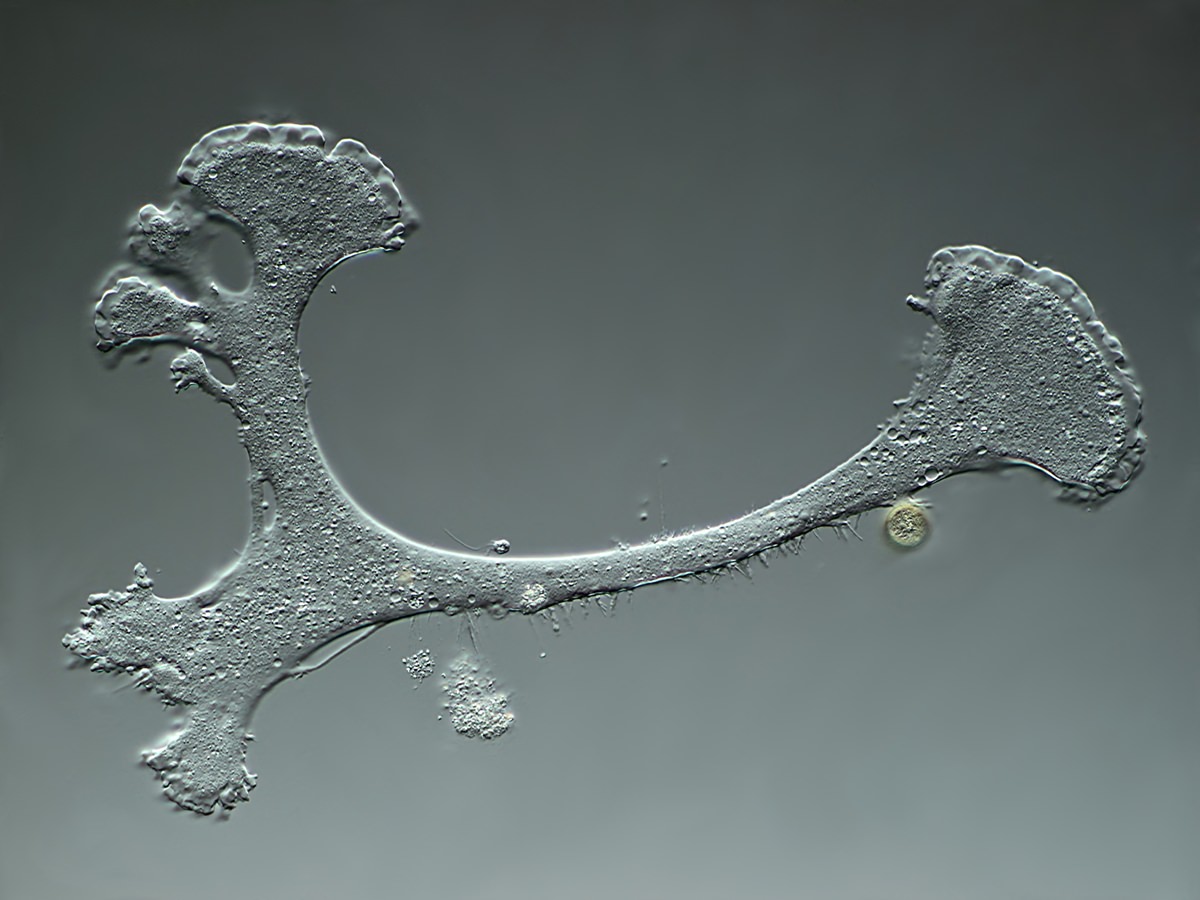 It seems that what happens is that branches "merge back" after touching "at the tips" leaving holes in such organisms, but that's just speculation on my behalf. I haven't (yet) found a source discussing the dynamics of how these holes get formed.

And a couple more images from a different source--a broader review of leptomyxidae. 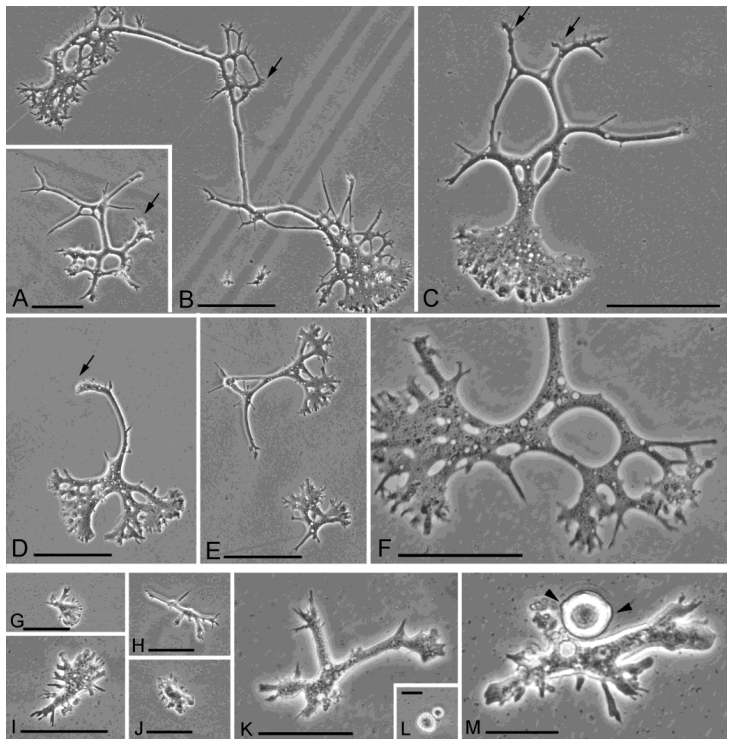 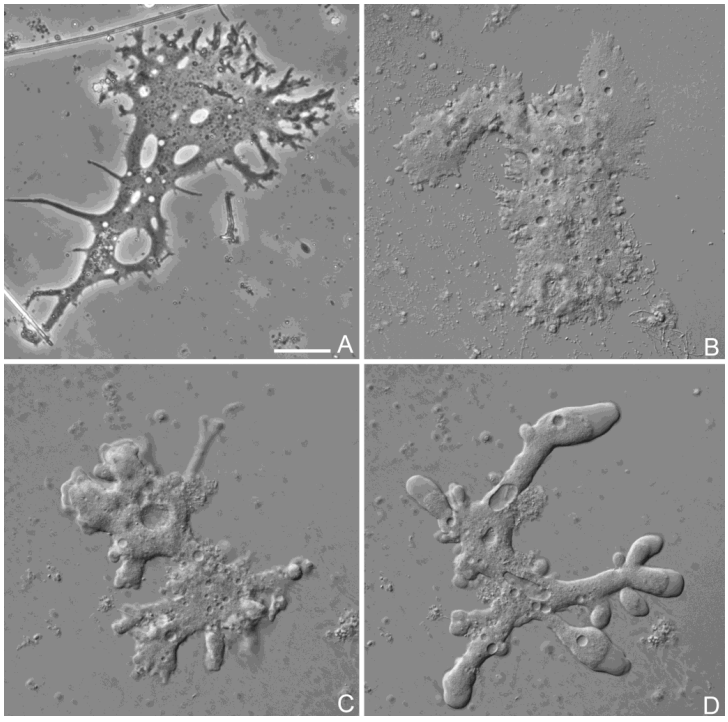 [Above] Isolate of Leptomyxa sp. (by morphology of trophozoite indistinguishable from L. reticulata) observed in the sample from Valamo Island, North-West Russia (by A.Smirnov). A: usual appearance of a trophozoite. B-D: subsequent stages of contraction of the cell on the object slide under the bright light beam. Figure D shows pseudopodia very similar to those or Rhizamoeba; polypodial cell like this one can move relatively rapidly for some distance. Molecualar data from this strain were not obtained. Scale bar is 50 μm.

By the way, the "branches" are more or less "legs"/"limbs" used in locomotion; but also this species is multinucleate:

Leptomyxa reticulata is the type species of the genus Leptomyxa. It is a multinucleate, expanded organism with plasmodia-like organization of its ramose body, possessing a simple life cycle [...] Moving amoebae usually form adhesive uroidal filaments along the posterior end of the body or an uroidal structure consisting of a pack(s) of such filaments (the latter often is seen when the locomotive cell adopts a shape of an irregular ramose triangle, with the base directed anteriorly).

(So yes, creepin' amoeba with holes and "limbs"!)

A more interesting question at this point is whether there are any (naturally occurring) single-nucleus examples of "cells with holes".

The short answer seems to be "yes", you can get single cells that are toroidal (donut-like) in shape. This seems to be done in the lab by various manipulations. This was first done in 1961. Notably, the cells in question seem to be eggs or single cells of multicellular organisms.

I am guessing that what you are seeing in the micrograph you show is not a hole. I think that a vacuole is a good guess, contractile vacuoles are common in protist organisms. Here is another example of a protist with a contractile vacuole "hole" in 2D. The cell image library is a good resource if you want to investigate further.

I think that you are unlikely to be able to see enough of the 3D structure there to ascertain that there is a hole through the cell from that image. A 3D projection of the cell could be reconstructed by confocal microscopy, but it would be actually a 3D structure- it's made up a bunch of 2D section images like the one you show. 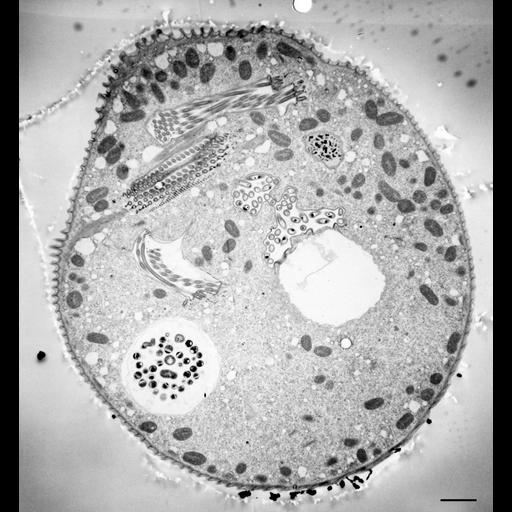 Not the answer you're looking for? Browse other questions tagged cell-biology microbiology photography or ask your own question.

4
Short-term Lamarckism in asexual single cell organisms
17
How can Valonia ventricosa cells get so big?
18
Are there single-celled organisms that have evolved from multi-cellular ones?
9
Are all cells organisms?
6
How were we able to determine the age of the first cell?
1
How does the zygote divide much faster than other cells?
6
Are there any organisms that are made of more than one (~5-12) cell?
8
Why are microtubules absent in and around the nucleus?