How verified experimentally is the Marginal Value Theorem for viruses?

Reading some Stanford notes on R0, they get to MVT and optimal virulence:

Consider a directly-transmitted infection from which there is no recovery (e.g., Herpes Simplex). The population experiences a baseline mortality rate, µ, and a disease-induced mortality δ. [Then the SI model] 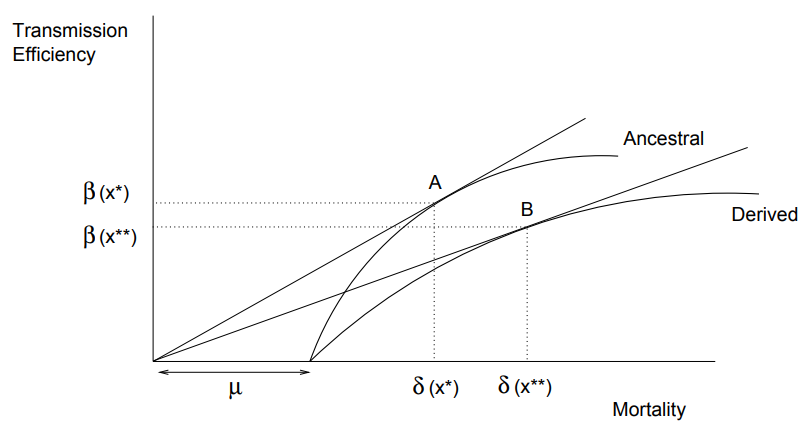 Figure 4: Marginal value theorem for optimal virulence. The ESS [evolutionarily stable strategy] virulence occurs where a line rooted at the origin is tangent to the curve that relates β to δ. Two curves are depicted. The first curve shows a pathogen in which transmissibility increases relatively rapidly with mortality. Point A indicates the optimal balance between β(x) and δ(x) under this case, and the optimal virulence is indicated x∗ . For the second curve, relative transmission is less efficient. Therefore, the tangent line from the origin to the curve hits further out (B) along the mortality axis and the optimal virulence is higher (x∗∗).

Wikipedia has a page on MVT but it doesn't discuss viruses/virulence at all (although it has some criticism of MVT from other angles/domains). So, how verified experimentally is MVT for viruses?

I'm not an expert but it seems purely theoretical. There are some fairly basic criticisms that can be made of this model. First it assumes that viruses tend to optimize propagation, a perfectly reasonable assumption. The clear prediction is that propagation rate should be inversely related to mortality rate. Quickly checking a list of the most common viruses shows you that this relation is not that strong, if there at all. The second issue is that R0 is a very abstract measure. Viruses do not propagate in a straightforward manner. Rabies relies on animals biting each other, HIV sexual contacts, etc. On average each virus will still have an R0, but I'm not sure it is so sensible to assume it will trade-off with mortality as it relies on the animals behavior (although with rabbis for example the animal behavior is actually modulated by the virus itself to increase propagation). Lastly epidemics usually start with a zoonotic disease randomly mutating and jumping species. They often have quite different effect on different species so here again I am not sure it is completely reasonable to assume that the mortality rate of a virus will tradeoff with infection rate.

It's still a useful tool to think about how viruses should behave. As you noted there also are criticisms about the MVT to describe animal foraging. But mathematically, under some assumptions, it is the optimal solution. So any deviation you see from that tells you your assumptions were wrong.

The answer seems to be "not much". I did find one paper that proposed MVT for viruses but instead of transmission efficiency in abstract terms they used/proposed lysis time as the parameter that might get optimized for/by phages. And as dependent variable they proposed not mortality but host density.

The problem indeed seems to be that before one even bothers to consider such a (MVT) model, the assumption[s] that that parameter gets optimized need to pass the "smell test".

Lysis timing has a clear genetic basis in all lytic phages, suggesting that it is appropriate for optimality. Large genome phages have modular lysis timing genes (holins and anti-holins). Mutations in holins have few pleiotropic effects, as shown by experiments with site-directed mutations in holins. Perhaps more crucially, holins translocated to different phage genomes retain their function in the new genome [24–26]. These studies establish a mechanism for genetic variation in the optimality phenotype that is free of major pleiotropic effects. In essence, holins provide a genetic ‘identity’ for lysis time [35].

Lysis timing also has a clear genetic basis in phages with small genomes, because these phages have genes dedicated to lysis. Thus, lysis timing can plausibly evolve through changes in the expression and activity of the lysis genes. Evidence of genetic variation in the phenotype could be obtained otherwise (e.g. by measuring heritability in lysis timing). However, knowledge of genes that regulate lysis timing not only circumvents the need for such evidence, but also reveals that lysis timing is and has been a major fitness component in phage life histories.

Here we employ phage mutants to explore issues of phage latent-period evolution as a function of the density of phage-susceptible bacteria. Theory suggests that higher bacterial densities should select for shorter phage latent periods. Consistently, we have found that higher host densities (≥∼107 bacteria/ml) can enrich stocks of phage RB69 for variants that display shorter latent periods than the wild type. One such variant, dubbed sta5, displays a latent period that is ∼70 to 80% of that of the wild type—which is nearly as short as the RB69 eclipse period—and which has a corresponding burst size that is ∼30% of that of the wild type. We show that at higher host densities (≥∼107 bacteria/ml) the sta5 phage can outcompete the RB69 wild type, though only under conditions of direct (same-culture) competition. We interpret this advantage as corresponding to slightly faster sta5 population growth, resulting in multifold increases in mutant frequency during same-culture growth. The sta5 advantage is lost, however, given indirect (different-culture) competition between the wild type and mutant or given same-culture competition but at lower densities of phage-susceptible bacteria (≤∼106 bacteria/ml). From these observations we suggest that phage displaying very short latent periods may be viewed as specialists for propagation when bacteria within cultures are highly prevalent and transmission between cultures is easily accomplished.

There might be more papers like this, but it doesn't look like the (more) universalist approach (i.e. transmission vs mortality) from the ecology notes has had much traction with virologists.

Not the answer you're looking for? Browse other questions tagged evolution virology epidemiology or ask your own question.

33
How did viruses come to be?
3
How are viruses isolated?
10
How exactly does alcohol solution kill or neutralize viruses?
1
how the coronavirus was distinguished?
0
Could an exposure to a small amount of viruses result in an easier course of the disease?
4
Which viruses still present today caused a deadly pandemic/epidemic in the past?
0
Can vaccines drive viruses to evolve? If so, how?