Obviously there is herd immunity against many viruses such as measles because of vaccines.

Can we say that there is herd immunity against any particular virus even though people are not getting vaccinated, and what virus would that be?

Do you typically get herd immunity without vaccines against viruses without vaccines or do the viruses just linger around and infect fewer people because many have already become immune after catching the virus and developing anti-bodies?

What is "normal" virus behaviour?

This is not just a corona related question, this is true for each disease which is can be transmitted easily and which builds up a lasting immunity.

Herd immunity per se means that a large proportion of a given population is immune to a given disease, either because of vaccination or because the population went through the disease, survived it and built up lasting immunity. This means that even when this disease comes around again, it will only infect few people who have no immunity, but will not spread through the population. This can be seen in the figure below (from here), which implies vaccination, but works as well with getting the disease. 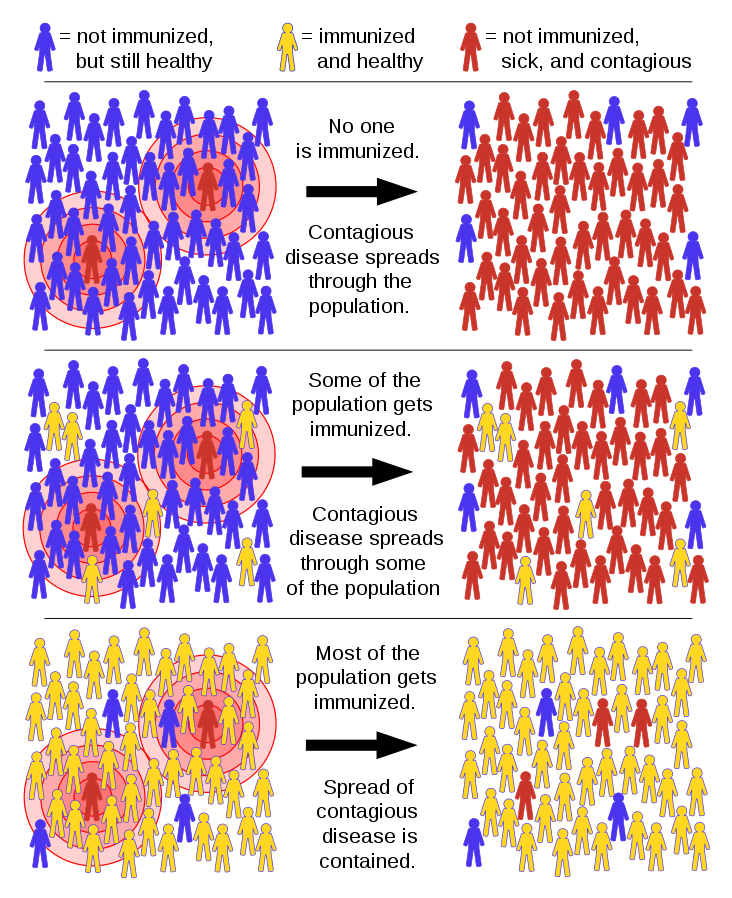 The first case is what happens right now with SARS-CoV-2, it is a new disease to which no one has immunity, so everybody who gets in contact will get the disease (either more or less severe).

If no vaccine would be available, this infection would go on, until a big enough proportion of the population has gone through the infection, developed immunity and thus stops the spread (go to the third part of the figure). At this point a big pandemie would stop.

However, this strategy has one problem: People who are coming into the population (newborns for example) who have no immunity are susceptible for the disease. This ensures low level infection rates and will make sure that the disease will stay in the population, but mostly not noticable. Over time the number of not immune people will rise until there are enough of them to feed another big breakout.

As @bryankrause pointed out, in the past getting to the point to reach herd immunity (at least partly) for diseases like smallpox or measles and to maintain it, cost a lot of lifes.

This is exactly what can be seen in the number of measles cases before the introduction of the vaccine in 1967. Before vaccination every 18 - 24 months enough people without immunity where present, causing another wave of cases. After introducing the vaccination this pattern changes and case numbers went down drastically. See the figure (from reference 1) for illustration. This figure uses data from the US, but you see similar pattern in the rest of the world.

For some more information have a look at reference 2.

Herd immunity is not a steady state. There are always new babies born, adding susceptible persons to the population. So even in the case that there is neither immunity waning nor antigen drift in pathogen, herd immunity goes away over time, and a new wave of infections becomes eventually possible and happens sooner or later.

In order to keep herd immunity (as in the case of measles) you will have to vaccinate the children.

Not the answer you're looking for? Browse other questions tagged virology coronavirus herd-immunity or ask your own question.

3
Are B Cells unique to an individual's immune system?
1
What portion of America needs the Flu vaccine for herd immunity effects to become substantial?
6
How common are the "common" human coronaviruses?
1
Can you still contract a disease after being vaccinated and be able to spread it?
4
How the vaccine based on "non replicating viral vector" is produced?
7
Why can human viruses that can't infect chickens be grown in embryonic chicken cells?
1
SARS-CoV-2 : does vaccination provide a better immunity than being sick and recover?