Difference between viral and native RNA

I am a data scientist with really next to no training in microbiology. I hope you'll all forgive my ignorance to entertain these questions. The attention COVID-19 has gotten recently got me thinking: What is the fundamental difference between viral RNA and the RNA native to a particular cell?

What I mean is, we are often told in school that viruses hijack the cell's protein manufacturing facilities to express their own genetic material. The cell produces so much of the viral protein that it eventually lyses (for example). But what is it that makes the cell produce so much of the viral proteins? How does the cell not produce too many proteins from the cell's own DNA?

I suspect the answer comes down to the lack of gene regulation for the viral RNA. But is every gene that is native to the cell really subject to some sort of regulation? If so, is the real danger of viruses that they lack any kind of regulation? Then that seems to be a fairly easy thing to detect- at least theoretically. In other words, a cell, or a scientist could label a sequence of RNA as dangerous simply because it is unregulated, regardless of whether it came from a virus.

A second question is, we are told that the viral proteins self-assemble and encapsulate copies of the viral RNA just by chance. Doesn't this seem unlikely? Are the virus's components really so ubiquitous in the cell that the virus will self-assemble including all its necessary components a significant portion of the time? I suspect for this to happen, the virus's RNA would need to be copied many times so that it would be plentifully available. Then it comes back to the same question as above. Is viral RNA unique in that it gets copied indefinitely?

virology gene-regulation
Share
Improve this question
asked May 2 '20 at 21:12

There is no fundamental difference between viral RNA and and native cellular RNA other than the sequence of RNA bases in them. The sequence differences are not biochemically apparent in the RNA, only in the protein products produced from the RNAs.

Regulation of native RNA is done in a huge variety of ways (nothing in the cell is designed; everything is ad hoc, so any random happenstance can become established). Native regulation is essential, otherwise runaway production will happen leading to cell death or to cancer.

Much, if not most, of the native regulation is done by regulating transcription of DNA into RNA. Once the RNA is in the cytosol, little further regulation is done, so viral RNA in the cytosol has the run of the cellular protein factory. But at least some viruses have acquired further advantages which help their RNA out-compete the native mRNAs for use of the protein machinery (see, e.g., Hijacking the translation apparatus by RNA viruses)

So it is not really an easy thing to "label a sequence of RNA as dangerous simply because it is unregulated" as the wide range of normal RNAs in the cytosol does not provide a basis for determining if any are "unregulated" and the cell cannot be protected in that manner.

Self-assembly is widespread in normal cellular functions as well as in viral production. The molecules involved have long-honed attractive points for their mate molecules, and in the jiggling molecular soup of the cell the molecules can soon bump into each other and join up. Thanks to the virus's uncontrolled production, new viral particles have plenty of component molecules available for this assembly.

(If you wonder I'm posting two answers, it's because this q-post asked two questions in one.)

Regarding the issue of virus self-assembly... studying it has indeed been a challenging issue. There's a recent (2019) PNAS paper on that:

Despite decades of study, how capsids self-assemble has remained a mystery, because there were no methods to measure the assembly kinetics of individual capsids. We surmount this obstacle using a sensitive microscopy technique based on laser interferometry. The measurements show that a small nucleus of proteins must form on the viral RNA before the capsid assembles. 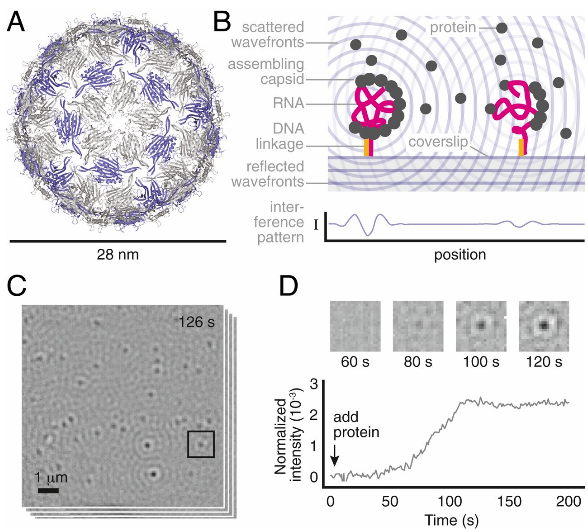 Overview of the measurement. (A) A structural model of the MS2 capsid (PDB ID: 2ms2) shows its small size and T=3 structure. The 2 coat-protein dimer configurations are shown in gray and purple. (B) We inject a solution of unassembled dimers over a coverslip on which MS2 RNA strands are tethered by DNA linkages. As dimers bind to the RNA, the resulting particles scatter light. The particles appear as dark, diffraction-limited spots because of destructive interference between the scattered light and a reference beam. (C) We monitor many such spots in parallel. Shown is a typical image of the field of view, taken 126 s after adding 2-μM dimers and representing an average of 1,000 frames taken at 1,000 frames per second. (D) The intensity of each spot is proportional to the number of bound proteins within each particle and changes in the intensity as a function of time reveal the assembly kinetics of each particle. The darker the spot is, the larger its intensity. (D, Top) Time series of images for the boxed spot in C. (D, Bottom) Intensity trace for the same spot using a 1,000-frame average. We discuss the relationship between intensity and number of bound proteins, as well as how we calculate the spot intensity, in Materials and Methods and SI Appendix.

Some videos posted as well in the Supplemental.

And a bit more on the observed dynamics:

We find that the “growth time,” the time required for a particle to reach the size of a complete capsid after it nucleates, varies from particle to particle, ranging from 30 to over 200 s (Fig. 2A and SI Appendix, Fig. S1). Of the particles that grow into a complete capsid, some grow at a constant rate, others slow as they approach completion, and still others contain intermediate pauses lasting up to 25 s (Fig. 2A and SI Appendix, Fig. S1). Despite these differences, essentially all of the traces are monotonic, with little or no observable disassembly steps.

So yeah, quite interestingly, the virus capsid just build and builds itself; even if it takes "lunch break" it's not a problem reversing the build progress in a significant manner.

The failure mode(s) of this self-assembly process are actually related to building/attracting "too much stuff", or two (or more) viral RNAs getting entangled by common protein shards they both (all) attract. Basically too much density of building materials can lead to problems... 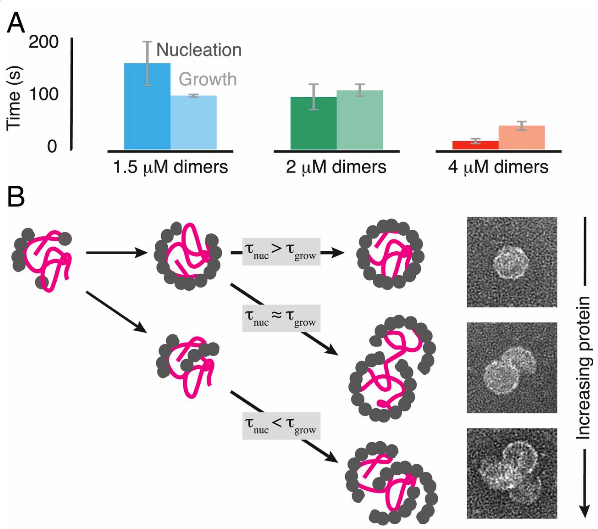 I mostly agree with mgkrebbs (+1), but note that while viruses generally have some kind of RNA replicase subunit (RdRP) to help them out, viroids completely lack those, yet manage to reproduce:

The closest thing to a viroid in humans is Hepatitis D. Until last year, it was thought that it was mostly a human disease, but a 2019 survey found that HepD analogs are quite widespread in invertebrates, fish, snakes etc.

Some recent research suggests that RdRPs have been independently lost in many animal clades. Ironically, the roles of these (former) host RdRPs was [most likely] to provide an anti-viral mechanism via RNA silencing (see [section] below for details), but evolution has provided with alternative host mechanisms for producing the same.

While it's possible to recognize the [core of the] viral RdRPs in software, it's not clear/known how to translate this into a general anti-viral strategy, as far as I know, due to their fairly substantial variation. (In general it's not enough to know the genetic sequence encoding the RdRP of some virus to even screen inhibitor drugs for it; additionally one must know the crystal structure of the RdRP complex for that virus.)

If you're curious about "intra-cell" (i.e. RNA-based) anti-viral defense... there exist mechanisms like that, but are substantially more complicated (that what you suggest), being based instead on RNA silencing: 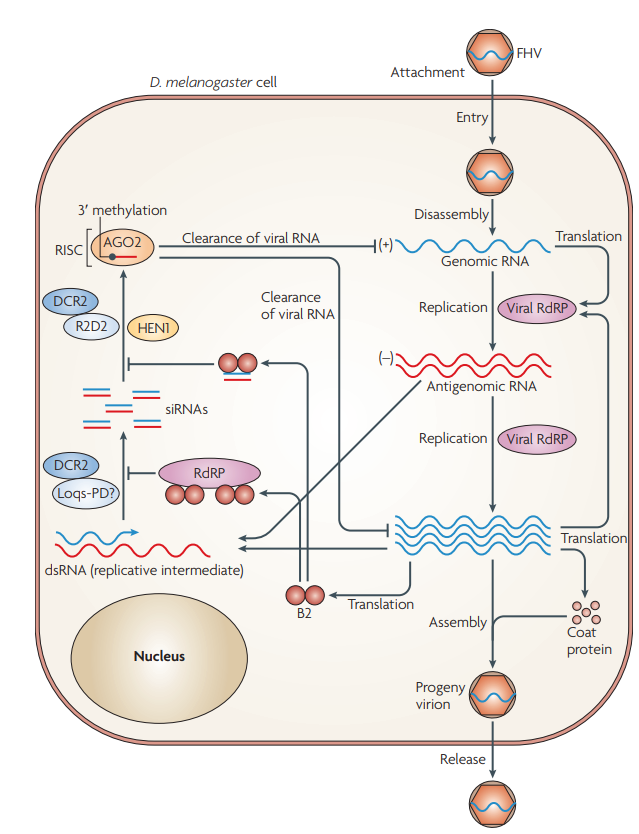 Key steps in RNA-based antiviral immunity induced in Drosophila melanogaster by infection of positive-strand RNA viruses such as flock house virus. Following entry and uncoating of flock house virus (FHV) virions, the genomic positive-strand RNA ((+)RNA) serves as both mRNA for the translation of viral RNA-dependent RNA polymerase (RdRP) and as a template for the synthesis of antigenomic negative-strand RNA ((–)RNA). Preferential production of (+)RNA by viral RdRP is achieved by multiple rounds of initiation of RNA synthesis from the 3ʹ end of the low abundant (–)RNA. The resulting double-stranded RNA (dsRNA) formed between the 5ʹ-terminal nascent progeny (+)RNA and the (–)RNA template is recognized by Dicer 2 (DCR2) and cleaved into small interfering RNAs (siRNAs), thereby triggering RNA-based antiviral immunity. The viral siRNAs are assembled with Argonaute 2 (AGO2) into the RNA-induced silencing complex (RISC), methylated at the 3ʹ end (depicted by a black circle) by HEN1 and used to guide specific clearance of FHV RNAs. As a counter-defence, FHV encodes a viral suppressor of RNA silencing, the B2 protein, which targets two steps in this immune pathway: inhibition of viral siRNA production by binding to viral RdRP and the viral dsRNA precursor, and sequestration of viral siRNAs by binding duplex siRNAs. Loqs-PD, loquacious-isoform PD.

And yes, the RdRP of viruses (the most significant part of the self-copier machine they come with) is an important drug target, e.g.

CoVs employ a multi-subunit replication/transcription machinery. A set of non-structural proteins (nsp) produced as cleavage products of the ORF1a and ORF1ab viral polyproteins (5) assemble to facilitate viral replication and transcription. A key component, the RNA-dependent RNA polymerase (RdRp, also known as nsp12), catalyzes the synthesis of viral RNA and thus plays a central role in the replication and transcription cycle of COVID-19 virus, possibly with the assistance of nsp7 and nsp8 as co-factors (6). Nsp12 is therefore considered a primary target for nucleotide analog antiviral inhibitors such as remdesivir, which shows potential for the treatment of COVID-19 viral infections (7, 8). [...]

The efficacy of chain-terminating nucleotide analogs requires viral RdRps to recognize and successfully incorporate the active form of the inhibitors into the growing RNA strand.

So while it's not so simple to detect/fight viruses' as you suggested, some replication-targeting strategies involve either "jamming their own (RdRP) copier with fake parts" (as e.g. remdesivir does) or producing [hopefully] as many "copy cancelers" as possible, for which the RNA silencing machinery actually uses parts from the virus copies themselves.

Not the answer you're looking for? Browse other questions tagged virology gene-regulation or ask your own question.

3
Difference between viral and human genetic material
3
Question about enveloped RNA virus viral genome
3
Which mRNAs enter P-bodies?
3
What is the difference between a viral strain and a viral isolate?
2
What is meant by 'proteolytic activation' of a virus?
7
Why can human viruses that can't infect chickens be grown in embryonic chicken cells?
5
Is viral single-stranded RNA in the absence of reverse transcriptase infectious?