Do animals exist with an uneven total number of digits?

I recently finished reading Contact by Carl Sagan. In the book they talk about a pattern in the transcendental number like pi or e, and comment that it is found in base 10 or however many fingers the race has to count with.

When in the end they find a pattern in pi it is in base 11, which I found a strange choice since I can't think of an animal that has an uneven total number of fingers, and I would think that most evolution would result in a somewhat symmetrical design.

Do any animal exist that has an uneven total number of fingers or equal lim, excluding polydactyly and oligodactyly?

Coscinasterias calamaria, the Eleven-Armed Sea Star! (Although I doubt it has much to do with pi) 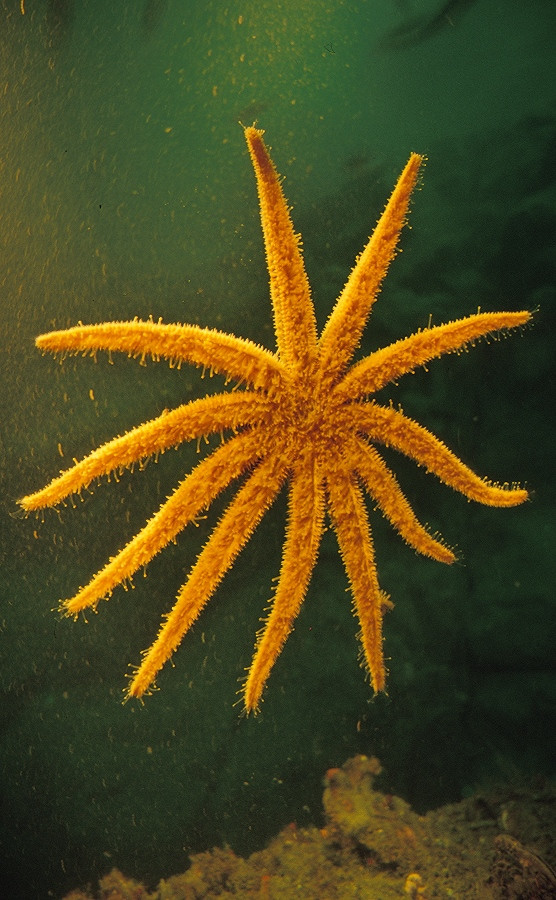 Your conclusion relies on the supposition that all beings must count using their finger tips (or the most paralogous, "finger-like" limb). In fact, even within humans this is not necessarily true: the Yuki native people of California count in base 8 by counting the spaces between their fingers; meanwhile the Oksapmin people of Papua New Guinea count in base 27 (an odd number!) via counting a range of different body parts. One can easily imagine counting in base 20 by counting on fingers and toes. Heck, the Sumerians used base 60. And here's a scheme for counting in base 16 on your fingers.

So, it's entirely plausible to count in base 11, even when assuming morphological symmetry. The beings just need to settle on precisely which 11 parts of their anatomy to count.

As for your actual question, I am unaware of any species with an uneven total number of fingers and I would be surprised if we found one, based on an argument of developmental symmetry and overall (coarse-grained) evolutionarily conserved development plans within major clades of extant animals.

I just wanted to say that I believe you're seeing it from a quite anthropocentric standpoint. It doesn't make much sense to search for patterns like even or odd numbers of fingers or limbs.

If evolutionary tends to result in bilateral symmetry, there is no reason at all why the symmetry should be inconsistent - like 4 fingers on one hand and 5 on the other.

Consistent bilateral symmetry will always result in even numbers:

The Eleven Armed Sea Star in @Oreotrephes' answer isn't much of an exception to the rule of symmetry, it's just radially symmetric.

24
Why do we have five fingers?

8
Examples of animals with 12-28 legs?
3
Animals with substantial five-fold symmetry besides starfish? Any land animals?
2
Why are there no large animals with chloroplasts?
1
Has evolution made a mistake with prehistoric animals?
8
Do animals with their eyes ~180 degrees apart have depth perception?