How do PARPs counteract coronaviruses?

[SARS-CoV-2 has] a nonstructural protein called NSP3, a component of which blocks the host’s efforts to fight off the virus. In particular, this protein shuts down host enzymes called PARPs, which prevent viruses from replicating, and interferes with cellular calls for the release of virus-fighting immune proteins called interferons.

I'm somewhat acquainted with interferons, but I'm trying to better understand the part about PARPs. Alas the Wikipedia page on these does not mention an anti-viral-[replication] function. So, how do PARPs stop viruses from replicating? (Is it by triggering cell death?)

Summary
The poster’s answer to his own question focuses on the end results of the anti-viral action of poly- and mono- ADP-ribosyl transferases — PARPs. The references he provided stimulated me to read about the molecular aspects of this topic, which is where my own interests lie. The ‘answer’ emerging from this reading is somewhat extensive, but can be summarized as:

The molecular details of the way in which PARPs act as anti-virals against coronaviruses, and in particular whether and how they antagonize viral protein NSP3, are still unknown. There is indirect evidence to implicate PARP9, PARP14 and PARP15, which — like NSP3 — share a structural feature known as a macrodomain, although their mode of action is complicated by the fact that PARP9 does not catalyse ADP-ribosylation. The viral NSP3 protein has the ability to remove ADP-ribose from proteins in vitro, but whether this is its mode of action in the cell is yet to be established.

The role of PARPs in the cell (1)
The name PARP is an acronym for poly-ADP-ribosyl transferase, although the 17 human PARPs are defined, not by this catalytic activity, but by the possession of a domain homologous the catalytic domain of the founder member, PARP1 (2). On the basis of assaying the cloned, expressed proteins for self-ribosylation activity most of these (eleven) have only mono-ADP-ribosyl transferase activity, and two (PARP1 and PARP13) are inactive — a conclusion consistent with the substitution of a key catalytic residue at the active site (3).
One can consider three stages in the involvement of catalytically active PARPs in cellular metabolism: activation, catalytic action and effect.

A common feature of activation seems to be the response to some stress signal, which may result in increased transcription of PARP genes or activation of an inactive form, for example by combination with an accessory protein (4).
Catalytically active PARPs covalently attach one or more ADP-ribose groups most commonly to specific glutamate residues (less frequently to asp, arg, or ser residues) of target proteins (or in some cases themselves) using NAD+ as a donor: 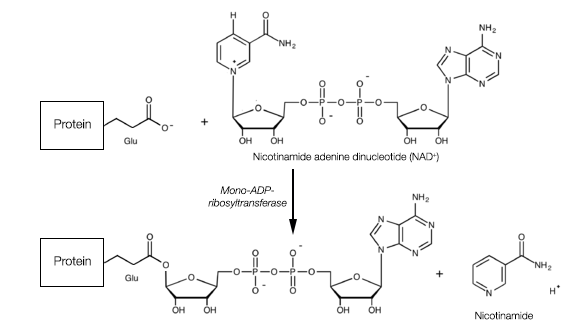 For those PARPs that catalyse poly-ADP ribosylation (PARP1, -2, -5a and -5b)) linear or branched chains are formed by glycosidic bonds between the 2′ and 1″ positions of ribose rings.
Although all PARPs — by definition — contain the PARP domain, they vary considerably in the other domains they possess, and this would be expected to be the basis for different substrate specificities. However for many PARPs these substrates have not been identified — only the processes they affect, the main processes (other than anti-viral action) appearing to be DNA integrity, telomere homeostasis, RNA transcription, regulation of mRNA translation by cytoplasmic stress granules and degradation of proteins through the ubiquitin pathway. Most effort has been directed at the substrates of PARP1, which include histones H1 and H2B and the chromatin insulator binding protein, CTCF (in response to DNA strand breakage) and the transcription factors NELF and C/EBPβ.
The effect of modification of the substrate protein may be a change in its activity (as exemplified by the inhibition of translation EF-2 by diphtheria toxin) or more generally interaction with some other protein that recognizes the ADP-ribose moiety. One feature of this recognition — particularly significant in the context of virus–host interaction — is that it often involves a specific domain called the macrodomain (5), named after the C-terminal domain of the histone H2A variant, MacroH2A. 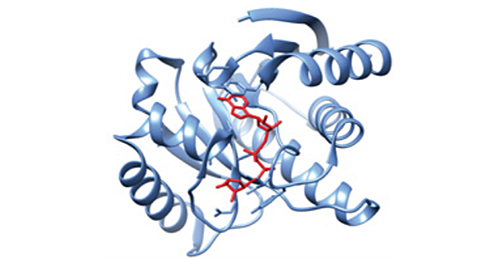 The macrodomain is found in certain classes of enzyme responsible for the turnover of the reversible modification of proteins by ADP-ribose. These include the polyADP-ribose glycohydrolases — which cleave ribose–ribose glycosidic bonds — and MacroD1 and MacroD2 — which hydrolyse the ester bond between the amino acid and the terminal ribose.
Also of interest is the fact that, several macrodomains are found in three PARPs: PARP9, PARP14 and PARP15.

PARPs in cellular anti-viral responses and viral anti-PARP proteins (6)
In different classes of viruses PARPs can act in a pro-viral or anti-viral manner. In coronaviruses (human SARS-CoV has been the subject of most study) they exert an anti-viral effect, as indicated by the effect of inhibitors of PARPs. Furthermore certain PARPs (-9, -12, -13 and -14) are induced in response to interferon, itself a consequence of viral infection. As mentioned by the poster, PARP13 binds directly to viral RNA resulting in its eventual destruction. However in most cases it is unclear which PARPs are involved, what their targets are, and whether their anti-viral action is a result of their catalytic activity — clearly not in the cases of PARP9 and PARP13. This is an important proviso to what follows.
A study of the evolutionary conservation of the all 17 PARPs in different primate species showed that five of these underwent rapid evolution, typical of proteins involved in host–viral conflict (7).
One of these was the catalytically inactive PARP13, which before its assignment to the PARP family had been shown to have anti-retroviral properties and was termed ‘ZAP’ (Zinc-finger Antiviral Protein). The zinc-finger domain binds directly to a long stretch of viral RNA (8), but the details of the recognition and how binding leads to the destruction of the viral RNA (is the PARP domain involved?) remain to be elucidated.
More relevant to coronaviruses, perhaps, is the positive selection of PARP9, PARP14 and PARP15, which all contain the ADP-ribose binding macrodomain. In contrast to PARP13, the mutations in these PARPs are found throughout the proteins, including the macrodomain, where they are found distributed in surface patches, rather than in the ADP-ribose pocket. The relevance of this to anti-viral action is that there is a virulence protein, NSP3, in SARS-CoV which posses three macrodomains, one of which (MAC1) is structurally homologous to the macrodomain of the PARPs. (This macrodomain is also found in the virulence protein of hepeviruses and togaviruses.)

This macrodomain has been shown to bind ADP-ribose, and mutations in the macrodomain of nsp3 have been generated at key residues at the binding site. Using these mutants it has been established first, that such mutants have reduced virulence compared with the wild-type virus, but that this difference is abolished when infection was in cells with knockdowns in the gene for macrodomain-containing PARP14 (although also in PARP12 knockdowns) (9).
It has been demonstrated that NSP3 can remove ADP-ribose from proteins in vitro, suggesting that this catalytic activity may be the basis of its virulence (6). However evidence for such action during infection is lacking.
If indeed the continual mutation of the macrodomain of PARP9, -14 and -15 is part of an “evolutionary arms race” with NSP3, the nature of the postulated interaction or antagonism between these proteins remains to be determined.

From one of the review papers of the author/prof (mentioned in that article) it looks like (table 1) PARP12 and 13 have direct anti-viral activity at least against some viruses; PARP12 was shown to have some activity against the Zika virus by binding the viral RNA and blocking translation, while PARP13 binds and degrades some influenza proteins like PB2 and PA.

There are quite a few paper cited in that review, which probably have a lot more details.

Basically type I interferon is not directly an anti-viral compound but rather activates/enhances a series of downstream mechanisms (interferon-stimulated genes) which translate into anti-viral compounds that regulate translation initiation and elongation... and among these are some PARPs (12 and 13, the latter actually seems to have two splice variants.)

the best-characterized antiviral protein is PARP13 or zinc finger antiviral protein (ZAP), which is encoded by the zinc finger CCCH-type, antiviral 1 (ZC3HAV1) gene. [...] ZAP is transcriptionally upregulated by type I IFN signaling and directly induced by phosphorylated IRF3 in virus-infected cells. [...] ZAP was first discovered as a potent antiviral factor against the retrovirus Moloney murine leukemia virus (MLV) in a cDNA library screen. Since then, it has been shown to inhibit a broad range of RNA and DNA viruses, including other retroviruses, alphaviruses, filoviruses, and hepatitis B virus. It is not understood what determines the broad yet specific antiviral activity of ZAP. It binds viral RNA via its N-terminal zinc fingers, and ZAP-responsive sequence elements in MLV and Sindbis virus have been mapped. ZAP recruits the exosome to target retroviral and specific host mRNAs for degradation but also acts to block viral genome translation. ZAP dramatically reduces Sindbis virus production, and experiments utilizing temperature-sensitive Sindbis virus mutants that are unable to replicate the RNA genome at nonpermissive temperatures support a mechanism in which ZAP represses translation of the incoming viral genome. [...]

In addition to ZAP, other members of the PARP family are upregulated by IFN and have also been shown to inhibit alphaviruses. Murine PARP7, PARP10, and the long isoform of PARP12 (mPARP12L) block cellular translation and inhibit replication of Venezuelan equine encephalitis virus (VEEV), another member of the alphavirus genus 20, 21. mPARP12L also blocks infection of a variety of RNA viruses from other families, such as vesicular stomatitis virus (VSV), encephalomyocarditis virus (EMCV), and Rift Valley fever virus (RVFV). Similar to ZAP, mPARP12L affects protein translation, and the tethering of mPARP12L to a renilla luciferase reporter mRNA inhibits its translation. Furthermore, mass spectrometry identified ribosomal proteins and proteins involved in translation as interacting partners of mPARP12L. mPARP12L interacts with ribosomes in the polysome-containing fractions at 4 hours post-infection (pi) with VEEV but facilitates disassembly of polysomes at later times of infection (12 h pi), which is dependent on its RNA-binding and PARP catalytic activities.

Weirdly enough Wikipedia has a page on antiviral protein which discusses ZAP, but fails to identify it as PARP13...

And a 2019 paper found that there are four ZAP isoforms, with varying degrees of effectiveness against different viruses.

2
How HIV Affects and Its Treatment using Combination Therapy
10
How do bats survive their own coronaviruses?
0
Is the SHC014 chimeric coronavirus "eerily similar" to Covid-19 in anything but a journalistic sense?
7
How common are the "common" human coronaviruses?
6
Why do COVID19 serology tests focus on the nucleocapsid while vaccine efforts focus on the spike?
11
Viral vector vaccines - why doesn't the viral vector get attacked by the innate immune system?
1
How would a "synthetic defective interfering SARS-CoV-2" work in practice? Wouldn't it require a large fraction of all cells to be infected?
1
Infection induced immunity vs vaccine induced immunity
2
Zayed et al. (2022) "Cryptic and abundant marine viruses at the evolutionary origins of Earth’s RNA virome"; expressed sequences or transcribed?
7
How are DNA virus cladograms actually calculated in practice? Is the procedure different for RNA viruses? Are these processes somewhat subjective?